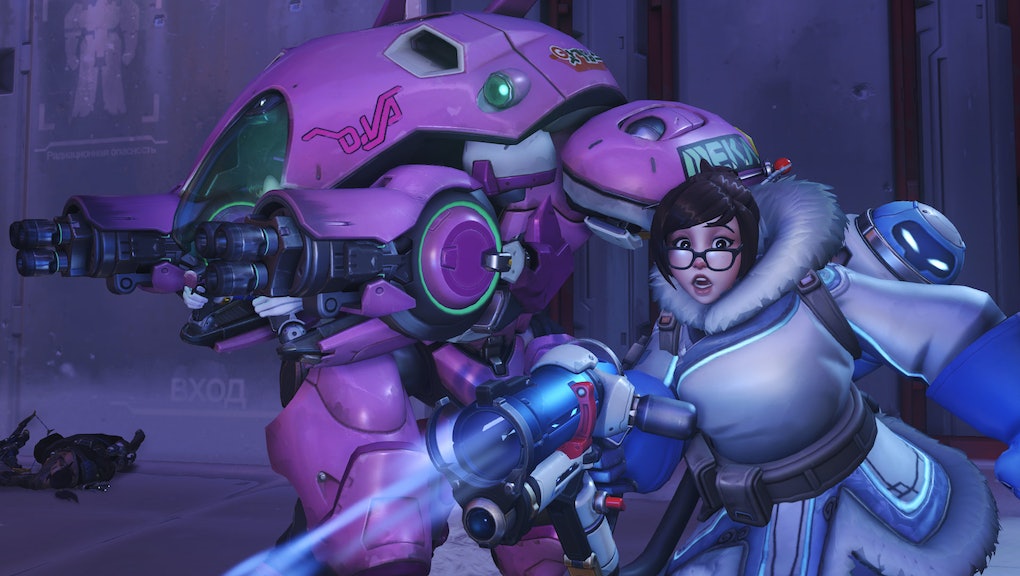 A viral Reddit thread is exposing Overwatch's nasty underbelly of toxic, sexist behavior, and the fandom is responding by making life hell for the woman who brought it to light. For devoted players like her, the best option may be a network of private chat rooms that offer an escape from harassment altogether.

On Feb. 20, redditor neutrondamage started a conversation on the forum /r/Overwatch about the unwelcome messages she'd received via voice chat in the game. Comments like "Hey, why aren't you in the kitchen making me a sandwich?" and "You're a small-tittied bitch" were the norm, she said — and when she played with a male partner, she'd hear lines like "Can I get a turn at pounding that pussy, my man?"

The thread accumulated over 2,800 comments, many featuring other players' accounts of similar harassment in the game. Much of the conversation was surprisingly civil and empathetic, but it incited a lot of backlash, too.

Luckily, /r/Overwatch moderators stepped in and managed to delete most of the worst comments, but the experience made one thing clear: When women speak up about being harassed, they often become the targets of even more harassment.

So where does Overwatch go from here? Suggestions from the Reddit community for fixing the game's harassment problem ran the gamut. Some called on Blizzard to implement harsher bans, and others advocated for bystanders in team chat to speak up when they hear someone else being harassed.

But a number of women — and other folks who are marginalized in the traditionally straight, masculine spaces of online first-person shooters — forgo the process of engaging with those toxic communities at all.

To escape the hellish harassment they experience while solo-queuing — the term for joining an Overwatch game with five random teammates you don't know — many players escape to their own pre-established communities.

These kinds of communities have homes all over the internet — like Reddit and Facebook — but one service that kept popping up in conversations with Overwatch players was Discord, a free online chat service that markets itself as a home for these kinds of gaming communities.

One Overwatch player, Lauren, told Mic over Skype that her Discord was a small, family-like setting for her friends — almost all of which identify as LGBTQ.

"I don't really play much competitive anymore because I don't really like where the competitive community is going right now — it's too toxic for my tastes — but I started talking to people I had known on Tumblr for awhile and they told their friends and their friends told their friends and now I have this nice little Discord server," Lauren said. "We've got about 31 people — so it's getting a bit crowded — but I think just about everyone on there identifies as not straight, at the very least. Many of our regulars are nonbinary, and that just tends to be the group that I play with."

"It's just this nice little community," Lauren continued. "It's very small, and not everyone is active, but it's nice to have a lot of regulars. We're always hanging out."

This is a solution neutrondamage has been considering in the wake of her viral Reddit thread — and the subsequent harassment it resulted in.

"I had a few people message me saying that they would like to start a Discord for people to group up in and I think it's a pretty great idea," she said. "I tried my best to read comments by other people who were harassed in competitive, and I feel fortunate to only have a few isolated cases in the beginning/middle of the season and a few at the end. It sounds as though some people go through quite a bit more abuse and I really do think that a Discord could help."

For frequent targets of harassment, they definitely do. For example, a Discord server that exists as a companion to /r/GirlGamers has over 1,000 members, according to Kat Lo, the creator of the original subreddit. In an interview via Skype, Lo — who is a researcher in online communities and harassment at University of California, Irvine — explained how players use this exclusive online space to escape the harassment they face in solo-queues. And not just in Overwatch, but in Dota 2, CS: GO and other online games.

"It's perhaps unrealistic in the short term to think we can change gaming culture," Lo said. "But we can create these spaces where people feel safe and feel like they have a community."

"The subreddit's great for venting, for saying, 'I've gotten harassed, what's some advice,' or bringing up articles on the topic, but if you just want to hang out with people and play games, you go to the Discord," Lo said. "So, through this networked approach, we're able to foster community and have a feeling of cohesiveness while simultaneously allowing people to meet in these impromptu ways."

But maintaining a community that's open enough to let these women find each other while simultaneously keeping harassers out is no easy task.

"[One of the Discord's moderators made] a bot and we made this really crazy invite system that allows us to keep track of people — in the sense that, if they lied about who they are, and they're actually a dude who's just going to hit on the other women, we can go back and look at the Reddit account and look at the associated Discord account and be able to ban them."

Additionally, the GirlGamers moderation team requires people who apply for the Discord server to actually prove they have a history of posting in /r/GirlGamers and engaging with that community. Lo doesn't like having to bar newbies from joining the Discord, but said it's a necessary step in maintaining this kind of a space. The need for that kind of security isn't surprising, especially when you consider the kind of backlash neutrondamage experienced for simply bringing up the topic.

"It's perhaps unrealistic in the short term to think we can change gaming culture," Lo said. "But we can create these spaces where people feel safe and feel like they have a community."