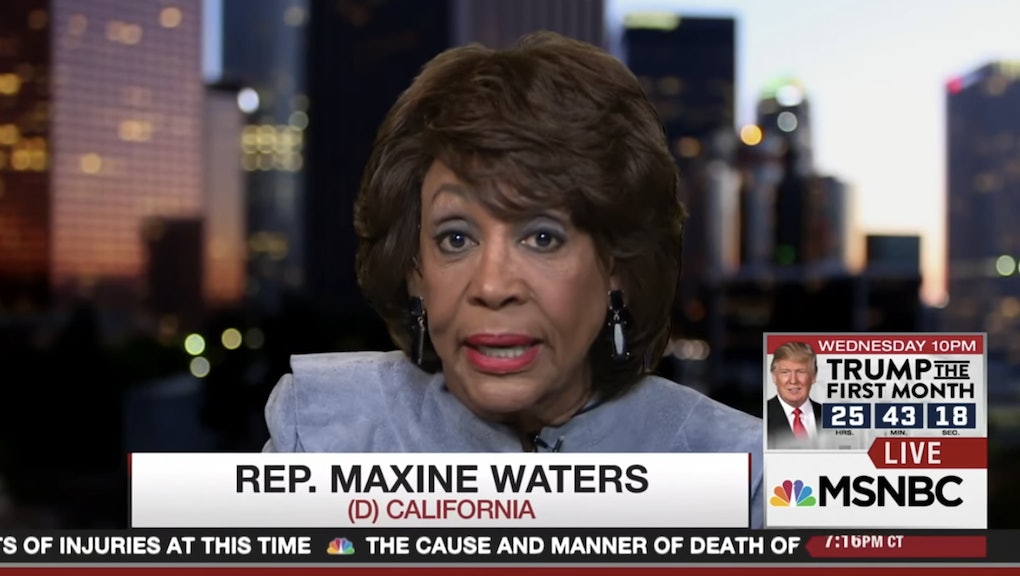 California Congresswoman Maxine Waters isn't here to waste anyone's time. She calls 'em like she sees 'em, and what she sees when she looks at President Donald Trump's newly installed Cabinet are a "bunch of scumbags organized around making money."

During a Tuesday night appearance on MSNBC's All In with Chris Hayes, Waters railed against the current administration and its dubious ties to Russia.

"Can't people see what's going on?" Waters asked host Chris Hayes. "Why do you think they hacked into our election? They hacked into the election because they have to make sure that Donald Trump got elected."

Waters continued: "Donald Trump got elected so that he could help them with what I think is a huge deal, not only to lift these sanctions but to take over all of these Soviet countries and pull them back into the Soviet Union so that they could have access to all of these resources."

But she wasn't done yet.

The congresswoman also had barbed comments for Secretary of State and former Exxon-Mobile CEO Rex Tillerson, claiming that his primary objective in office will be to lift sanctions imposed on Russia by former President Barack Obama for waging a cyber campaign aimed at swaying the 2016 presidential election in Trump's favor.

"Tillerson is there to get these sanctions lifted," Waters said. "I believe it, just watch him, he's going to continue to work on it. This is important for him, he's there because he negotiated the deal for Exxon with Putin."

Waters has been serving up unadulterated realness since the Trump administration's earliest beginnings. In January, she dropped the mic during a 21-second press conference with her claim that FBI Director James Comey "has no credibility."