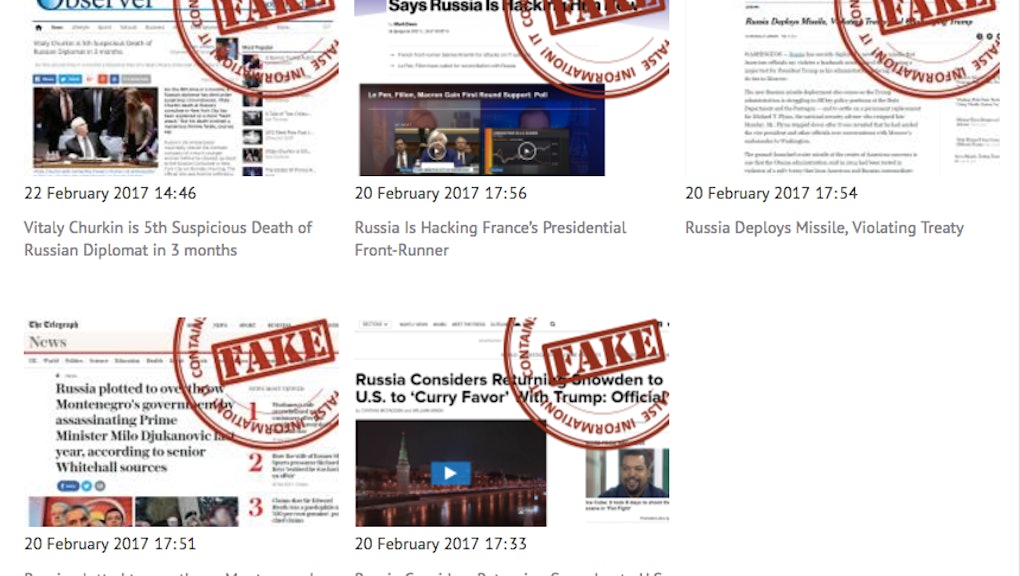 Here's something that might make President Donald Trump feel validated: Russia has labeled a number of real and legitimate media outlets fake news, ostensibly because those outlets had run unflattering stories about the Kremlin.

According to the New York Times, one of the publications on Russia's shit list, the country's foreign ministry added a fake news advisory page to its press service section. It features screenshots of five headlines — from the Santa Monica Observer, Bloomberg, the Times, the Telegraph and NBC News — all stamped with a big red FAKE and all captioned, "This article puts forward information that does not correspond with reality."

What the articles all have in common, of course, is reporting that does not reflect well on Russia.

Foreign Ministry spokeswoman Maria V. Zakharova told the Times that Russia would be calling out examples of "propaganda hoaxes" perpetrated by the press. While she did not say it explicitly, Zakharova would seem to mean the foreign press: No Russian outlets appear on the page.

"The aim is to demonstrate the main trends in fake news publications about our country and do everything to stop their dissemination," Zakharova told the Times. Fake news, she said, could describe any story that didn't include Russia's perspective or cited anonymous sources.

The Russian Foreign Ministry's fake news page is potentially an answer to the European Union's East StratCom Task Force, established "to address Russia's ongoing disinformation campaigns." It has flagged 2,500 false stories in 16 months, according to the New York Times, many of which are Russian-made.

"Russia is being accused of doing this, but how can you accuse us of disseminating untrue information by government agencies and the media while you are doing the same against Russia?" Zakharova told the Times. "While publishing information about Russia, the world media is doing the same thing — they never cite concrete facts — this is a sad paradox."

The specter of fake news haunts the 2016 election, after reports surfaced suggesting the Kremlin had commissioned trolls on social media to propagate mistruths about U.S. politics and had fabricated stories on state media, all with the goal of boosting Trump's popularity.

The concept of fake news has since been commandeered by conservatives as a means of immediately discrediting stories they'd like to disappear. Meanwhile, the White House has introduced us to the concept of "alternative facts" and continues to disseminate mistruths that advance the president's agenda: Trump railing against an alleged terrorist attack in Sweden that never happened, for example, or his adviser, Kellyanne Conway, citing the fictitious "Bowling Green massacre" as proof that the U.S. needs to keep refugees out.

Russia's Foreign Ministry seems to prefer the Trumpian model, slapping the fake news label on any story with which it disagrees. The president's favorite "fake news" scapegoat, CNN, has not yet made the Russian cut.