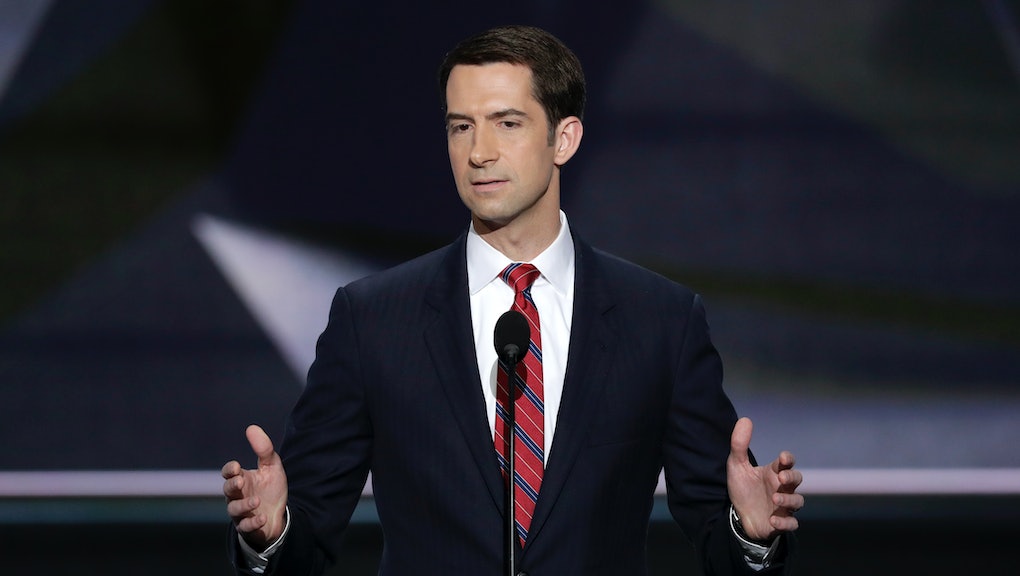 Sen. Tom Cotton (R-Ark.) was pounded with tough questions from around 2,000 angry constituents at a town hall in his home state Wednesday night, on everything from the repeal of the Affordable Care Act to Cotton's support for President Donald Trump.

Cotton's town hall was one of the most contentious among a slew of raucous town halls, despite the fact that it was in a state Trump won with more than 60% of the vote in 2016.

In one of the most stunning moments of the night, a woman named Kati — who described herself as a multi-generation Arkansan from a Republican family — stood up to tell Cotton that without the ACA's protections for pre-existing conditions, she "will die."

"Will you commit to a replacement the same way that you committed to the repeal," she asked.

Initially, Cotton tried to dodge her question, before giving an answer with almost no details about what kind of replacement he favors.

"What I'm committed to is making sure that people with conditions as serious as yours or young healthy people all have access to affordable, quality, personalized care," Cotton said.

In another heated moment, a woman whose voice shook with anger told Cotton that her husband was dying.

"You expect us to be calm, cool and collected," she said. "Well, what kind of insurance do you have?"

Others hammered Cotton for supporting Trump. One young man asked:

"If you call yourself a Christian man, if you call yourself an Arkansan citizen, an American citizen that stands for the Constitution, that represents kids like me, like them in the city of Washington, D.C., with the world watching us, are you making the right decisions for these kids that are reading those textbooks, while you are supporting the policies of a man who wants to grab women by the pussy."

Another person asked Cotton to help force Trump to release his tax returns, which Cotton refused to do.

Crowds lined up for the chance to ask Cotton questions, with the event going more than a half hour more than scheduled to get all of the questions in, CNN reported.

One woman in the crowd sought to assure Cotton that she was not a paid protester, an accusation levied against the throngs of protesters at town halls from Trump himself.

"First of all, I'm Mary ... from Fayetteville, and I am not a paid protester," one woman said, eliciting loud cheers from the audience.

The angry town hall Cotton faced is reminiscent of the anger Democrats faced in 2009 from Tea Party activists who were against President Barack Obama's health care overhaul.

So far, it's unclear whether the the anger at these meetings will have an impact on the 2018 midterm elections.

This anger comes before Republicans have even put forth a plan to replace the ACA — despite the fact that both Trump and the GOP have railed against the law since it was passed and have promised they had a better replacement plan.

Once concrete details are released, those details could either mollify Americans or enrage them further.

Trump promised on Wednesday that a replacement plan will be released in early to mid March.

"Maybe mid to early March we'll be submitting something that I think people will be very impressed by," Trump said at the White House Wednesday of the replacement plan.