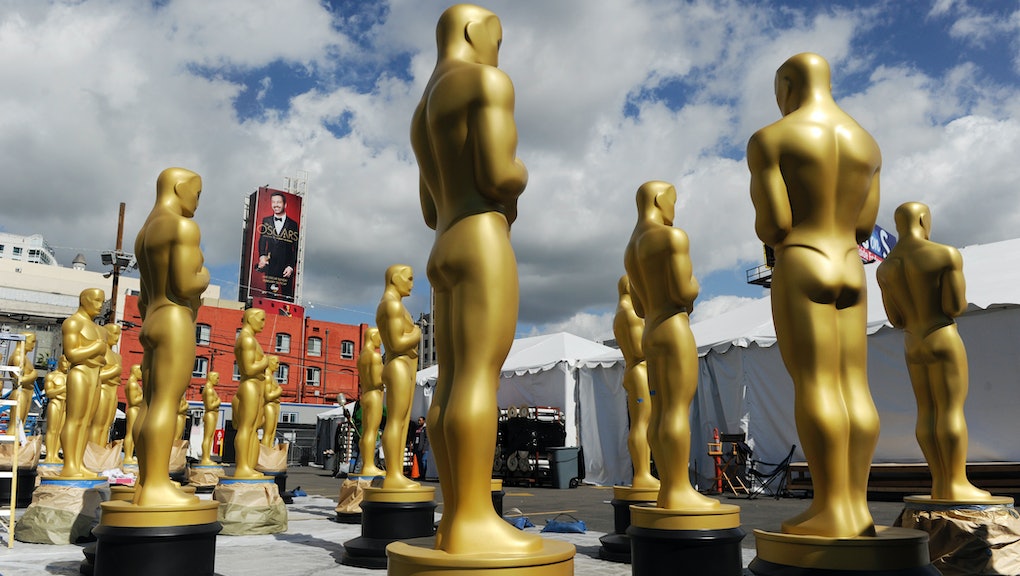 On Sunday, Feb. 26, the biggest stars in Hollywood will pack the Dolby Theatre for the greatest awards show of the year: The Academy Awards. The 89th annual Academy Awards ceremony is set to reward the past year's best in film, and though many of the races seem all but locked up — best director and best supporting actress to name two — anything can happen on Oscar Sunday.

While the stars will be waiting to hear their name called from inside the Dolby Theatre, millions of fans will be watching the ceremony from home to see how their favorite films fare. And for those of you that want the Academy Awards to carry some extra risk and reward, your best bet may be to join an Oscar pool.

Before you throw your money away on Viggo Mortensen to win best actor for Captain Fantastic — if you're a fan, sorry he's not gonna win — here are some of the best bets you can make on Oscar Sunday (you can check out some expert picks here as well).

This race is all but over. La La Land is going to win best picture at the 89th Academy Awards. While musicals may not be Oscars favorites, La La Land has steamrolled through prior awards ceremonies, all but guaranteeing a best picture win on Sunday.

If you need a bit more convincing before you place your bets on Damien Chazelle's original musical to win best picture, check out FiveThirtyEight's predictive model, which has La La Land as a clear favorite after wins at the Producers Guild Award and Directors Guild Award award ceremonies.

If, however, you are looking for a less mainstream pick, Hidden Figures does have an outside (strong emphasis on outside) shot to win best picture. Four of the last six winners of outstanding performance by a cast in a motion picture at the Screen Actors Guild awards have gone on to win best picture. Who won the SAG award this year? Hidden Figures. Take that as you will.

This category is probably even more of a lock than best picture. Damien Chazelle, director of La La Land, has already won the corresponding award at the Critics' Choice Awards, the Golden Globes and the Directors Guild of America Awards. The win at the DGA Awards all but guarantees that Chazelle will be taking home best director at the Oscars.

Since 2004's ceremony — where Peter Jackson won best director for The Lord of the Rings: The Return of the King — every winner at the DGA Awards, except one, has won the corresponding Oscar. The only exception? Ben Affleck, who was not even nominated for his directorial work on Argo (don't get me started).

Suffice it to say, Chazelle will be taking home the Oscar for best director; there is no need for an outside pick.

While not as much of a lock as the prior two categories, Emma Stone is the clear favorite to take home the Oscar for best actress. Stone has won at the Golden Globe Awards, SAG awards and the British Academy of Film and Television Awards, placing her well ahead of her competitors.

It is worth noting, though, that Stone's win at the Golden Globes was for best actress in a motion picture — comedy or musical, which is less likely to produce an Oscar for best actress than the award in the dramatic category. Still, FiveThirtyEight's model has Emma Stone nearly 100 points ahead of Isabelle Huppert from Elle and Natalie Portman from Jackie.

The smart money is on Stone.

Best actor is one of the less certain major categories heading into Oscar Sunday, though the likely winner should be either Denzel Washington or Casey Affleck. While Manchester by the Sea's Affleck was seen as the favorite for some time (especially after his Golden Globe win), Washington's win at the SAG Awards catapulted him to the top of the line.

The last time that the winner of outstanding performance by a male actor in a leading role at the SAG Awards did not go on to win best actor at the Oscars, was 2004, when Johnny Depp took home the  SAG award for Pirates of the Caribbean, but the Oscar eventually went to Sean Penn for Mystic River.

While you cannot be blamed for putting your money on Casey Affleck, after all, FiveThirtyEight's model still has him winning, Washington's win at the SAG Awards seems like too much to overcome. Expect Washington to take home his third Academy Award.

There is simply not much to write about this category: Viola Davis will be taking home the Oscar. Wins at the Critics' Choice awards, Golden Globe awards, SAG awards and BAFTA make her about as sure a thing as death and taxes.

Davis has run away with so many of this year's awards, it is simply too hard to even pick a possible runner-up. Michelle Williams for Manchester by the Sea, maybe? Quite simply, if you are going to be betting on this category, pick Davis, or do not pick anybody at all.

Before you blindly place your money on Dev Patel to win best supporting actor at the Academy Awards, let me at least say that this would be a bit of an upset. Mahershala Ali's win at the SAG awards makes him the likely favorite to take home the award come Oscar Sunday. Still, this race seems a bit open since Golden Globe winner Aaron Taylor-Johnson was not even nominated for an Oscar.

Furthermore, Patel's win at BAFTA makes this race very interesting. With the momentum on Patel's side, and the fact that the last two BAFTA winners have gone on to win the Oscar in this category, the smart money may very well be on the Lion star. Nobody will blame you, though, if you side with Ali's powerful performance in Moonlight.

Just to note, FiveThirtyEight's model has Ali as a healthy favorite. Again, take that as you will.

Predicting the screenplay categories can be a bit tricky since every award ceremony has different rules regarding whether a script is an adaptation or original. For instance, at the Writers Guild Awards, Moonlight won for best original screenplay. At the Oscars, however, Moonlight will be competing in the adapted category.

Since the guild awards are often the most predictive for Oscar Sunday, Moonlight's inclusion in the adapted screenplay category leaves best original screenplay up for some interpretation. The clear favorites are Chazelle for La La Land and Kenneth Lonergan for Manchester by the Sea. Chazelle took home the Golden Globe, while Lonergan recently nabbed the BAFTA.

While the award could go either way, I am sticking with Chazelle considering the academy is obviously fond of La La Land after giving the film a record-tying 14 nominations. Still, bet on this category at your own risk.

Though Arrival's Eric Heisserer took home best adapted screenplay at the WGA, it did not have to compete against Moonlight. With the academy deciding to place Moonlight in the adapted competition, rather than the original screenplay category, Barry Jenkins and Tarell Alvin McCraney are the clear favorites to take home Oscar gold.

While an argument could be made for Arrival, or BAFTA winner Lion, the smart money is definitely on Moonlight.