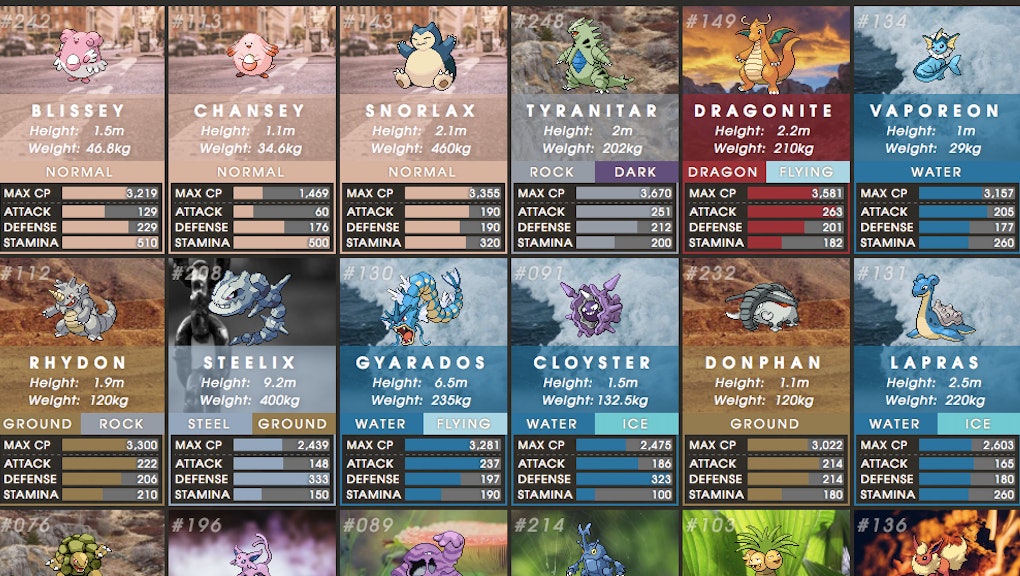 By now, hopefully, you've had some time to dig into the new Pokémon Go update, which added more than 80 new Pokémon from Gen 2's Johto region into the mix. Once you get tired of hatching eggs and walking around trying to catch the new Pokémon, there's only one thing to do: gym battling.

We've previously covered the top 20 attackers and defenders for Pokémon Go back in December, but with the new Johto Region Pokémon introduced into the mix, there are a few upsets. If you're still happy using Dragonite, Snorlax and Lapras, that's great! However, there are a number of really great new Gen 2 Pokémon Pokémon in Pokémon Go you should try if you're looking to shake things up.

Although, according to The Silph Road, Alakazam and Dragonite still top the attacking charts with 271 and 263 attack respectively, Gen 2's Espeon is one of the strongest attackers you can acquire in the update. Much like other attack-based Eevee evolutions, Espeon is pretty fragile, though, so it won't be much good for defending gyms.

For an easy way to get Espeon in Pokémon Go, you can use a similar nicknaming trick to getting Jolteon, Flareon and Vaporeon. Just name your Eevee "Sakura" and make sure that the name change registers before you evolve your Eevee.

Scizor, the Bug/Steel-type evolution of Gen 1's Scyther, is also a good attacker with 236 attack power. It's dual type makes it a great addition to any team looking to incorporate some Gen 2 Pokémon into it. To evolve a Scizor, you'll need one of the new evolutionary items: the Metal Coat. Once you have it (and 50 candies) you can evolve your Scyther and presto! You'll have a Scizor.

Unsurprisingly, Gen 2's Tyranitar is also a great attacker with 253 attack and an incredibly high max CP at 3670, beating out Gen 1's Dragonite by almost 100 points. That said, Tyranitar is the final evolved form of Pupitar, which evolves from Larvitar. It's going to take you 125 Larvitar candy to evolve a Tyranitar unless you get lucky in the wild — and that's not including leveling it up to a high CP.

Ultimately, your patience will be rewarded with a really strong attacker — who also happens to have one of the best overall stat rankings according to The Silph Road. Of course, you can always cross your fingers and hope to find one in the wild. It might even be worth it to bone up on how to maximize your chances of catching rare Pokémon in the wild, just in case you run into one.

If, by some stroke of luck, you manage to accrue more than one Metal Coat, you'll finally have an opportunity to use those Onix candies you've been saving. Steelix, Onix's evolved form, is a defensive powerhouse with 333 defense, making it a clear frontrunner for defending your gyms.

If Steelix isn't your style, there are tons of other great new defenders introduced in the recent update you can use. Skarmory, the steel/flying-type and Mantine, the water/flying-type manta ray Pokémon, both have a defense stat of 260, and a max CP of 2,032, according to The Silph Road. So either Gen 2 Pokémon can be a great asset to your team if they hatch out of a 10km egg.

Although it's also tempting to get an Umbreon or a Forretress for defending gyms you've taken, don't forget about the elephantine Donphan. Its attack and defense are matched at 214, meaning that although it doesn't have as much defending power as an Umbreon or a Forretress, it'll be able to put the hurt on enemy Pokémon a little easier than either of those because of its higher attack. If you're looking for a more balanced workhorse Pokémon, Donphan is a good one to consider.

We tried to sandbag it for as long as we could, but Blissey is a strong contender for one of the best Gen 2 Pokémon available in Pokémon Go right now. She's weak against fighting types, but chances are still pretty good that if you've got the ability to make a Blissey right now, you won't go wrong putting one on your team. That high stamina stat means she can use her charge abilities more often than just about any other Pokémon currently available.

Lanturn, the Electric/Water-type Pokémon, is also a great choice if you'd like to be able to use your charge ability more often when taking gyms. It has a stamina stat of 250, putting it just behind Lapras and Vaporeon, and although it'll never get as powerful as either of those two, it still hits a respectable max CP of 2,077. That's enough to make it a good middle ground if you haven't gotten lucky with a Lapras or Vaporeon.

Piloswine, the lovable tusked pig, is another good choice if you're looking for something with a good stamina stat that's a little more aggressive. Its max CP sits around 2,284 and it has 200 stamina and 181 attack, meaning that you'll get a little more bang for your buck when you use its charge attacks in combat. It's not likely to pull an upset against a Snorlax or a Dragonite without some assistance, but its stats are solid enough (and it's common enough) that you'll probably want one around.

If you don't see your favorite Gen 2 Pokémon on our list, don't despair! It's really easy to see how your favorite Pokémon stack up against newcomers and old favorites by using The Silph Road's research tool. Just make sure you select "Include Gen 2 Pokémon" at the top of the list, and you'll be able to sort Pokémon by Max CP, attack, defense, stamina or their combined stats.

Additionally, it helps to remember that not all Pokémon are created equal. Even if you manage to net that sweet Blissey or Tyranitar through egg hatching or Pokémon catching, its IVs might not be up to snuff. If you're serious about gym battling and having an optimal team, The Silph Road's IV Rater tool will be a huge asset to you. Now go out there and be the very best, like no one ever was!