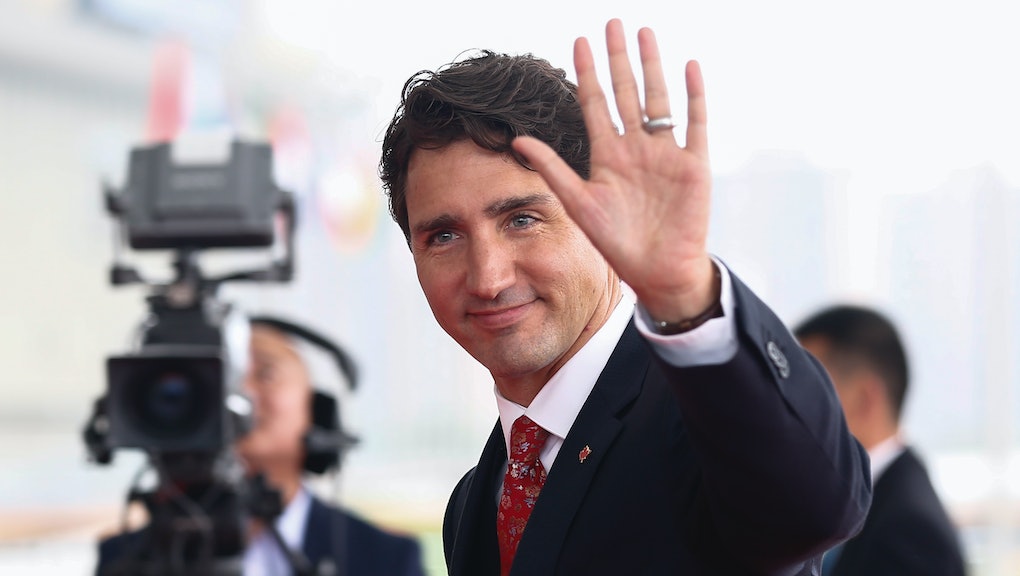 Canadians are fond of imagining ourselves as progressive. We've been patting ourselves on the back since the 2015 election for voting in a government that promised to open the doors to refugees and take action on indigenous rights.

But now that the time has come to take action on those promises, that bright image is hard to hold onto. The start of 2017 was marred by the revival of the Keystone XL pipeline, tightening restrictions on refugees and the horrific Quebec City mosque shooting by a Canadian white nationalist.

When Prime Minister Justin Trudeau met with Trump, people were quick to paint them as polar opposites. It's a familiar story. Every selfie Trudeau takes adds to his public image as the progressive answer to a conservative political climate, even though his policy track record is nothing to get excited about.

Don't let the popularity of Justin Trudeau's telegenic liberal mug distract you — nationalism is on the rise in Canada, and conservative politicians seem to be jumping onboard.

Canada has seen a remarkable recent expansion of far right nationalism. Rebel Media, an ultra-nationalist news source led by right-wing pundit Ezra Levant, runs stories that harp on "liberal elites" and "beta male snowflake[s]." The outlet drew attention for its incredibly punchable video interview with neo-Nazi Richard Spencer, where he applauded them for "pushing things in the right direction" in Canada.

In the wake of the Quebec City mosque shooting, the site falsely suggested the shooter was Muslim, claiming the attack was due to a "bitter rivalry" between local mosques even after the actual suspect was identified. On Feb. 15, Rebel Media hosted a nationalist "freedom rally" condemning a Canadian anti-Islamophobia motion.

Last year, politician Kellie Leitch made headlines by proposing an undefined, unclear and potentially costly "Canadian values test" on all refugees and immigrants. In a recent interview, Leitch described it as a "common sense policy: having face-to-face interviews with each individual entering Canada, about Canadian values." She's also been officially endorsed by two separate white supremacist groups; she officially rebuffed at least one of them, but stood by her statements.

The Canadian nationalist shares the race for party leader with Kevin O'Leary, the pro-oil star of Shark Tank who's promised to repeal essentially everything done since the last Conservative government was in power.

Not even the beloved Canadian prime minister is free from blame. In an international climate dominated by right-wing attacks on immigrants and refugees, Trudeau tweeted the following feel-good message:

It was welcoming, but it was also highly misleading. As kind as Trudeau's words were, the actual policies of the Liberal government tell a different story.

Just before the beginning of 2017, the government capped private sponsorship applications for Syrian and Iraqi refugees for this year at just 1,000. That number that was reached within the month. In Quebec — where the mosque shooting took place — the provincial government has suspended private refugee sponsorship indefinitely. In early February, Xtra magazine discovered that when the Liberals promised to accept more Syrian refugees, they simultaneously ended their LGBTQ Iranian refugee program.

And while the government was quick to applaud itself for accepting thousands of refugees in 2016, significantly less attention has been devoted to settlement and integration services. As of June 2016, only around 10% of the budget allotted to those services was actually spent.

That means that in some cases, refugees spend over a year with heavily restricted health care coverage, on waiting lists for language classes and with limited economic opportunities. There are no plans to change things any time soon — but the prime minister seems set on winning over the media rather than creating meaningful policy responses.

Trudeau has also spoken strongly in favor of Trump's executive order to resume work on the Keystone XL pipeline. The project will span from the territories of the Cree and Dene nations in Alberta to lands belonging to the Oceti Sakowin peoples in North Dakota. The latter group is also opposing the Dakota Access pipeline, another pipeline Trump revived.

As for Trudeau's feel-good media messages, indigenous Canadians are far from impressed. The "disconnect" First Nations people see between the Canadian government's middle-of-the-road, camera-friendly messaging and the actual content of its policies is hard to ignore. Trudeau mocking protestors and dodging questions on his broken promises to indigenous communities at a Saskatoon town hall forum on Jan. 25 was a collection of extraordinarily painful moments.

In particular, protesters called out the prime minister on his pro-pipeline policies, including Keystone XL. Several First Nations communities have expressed fears over the threats these pipelines pose to the health, territory and status of indigenous rights. But Trudeau seems to be more concerned with shoring up the popular notion of Canadian multiculturalism at the expense of creating and empowering policies to protect minorities in Canada.

This strategy is telling. The Liberal government seems set on reaching a middle ground with its nationalist opposition, even as it plays progressive for the sake of its public image.

The Conservatives were openly nationalist even before their recent alt-right turn; recall their 2015 election platform, featuring niqab bans and a tip line for reporting "barbaric cultural practices" to the government. Trump-style politicians and everyday nationalism are not as far away as we'd like to think.

Trudeau won in 2015 by looking like the only progressive choice to beat the Conservatives. Now that the Liberals have a majority in Parliament and have thrown away their promise to introduce more proportional representation, Trudeau seems to think he has the left in the bag — and that he can afford to backtrack and sideline them in favor of gaining votes on the right. He's abandoning those same promises that made progressives love him, like taking action on indigenous and environmental issues and accepting more refugees.

Canadians who watched the 2016 United States election should take notes. Trudeau's Liberals are following the same strategy as Clinton's Democrats. And there's a real danger of falling into the same trap.

As Trudeau breaks more and more of his election promises and alienates whatever progressive support he still has, it's getting harder to reconcile his sunny exterior with the stony face he gives to Canadians who have been let down by lukewarm policy. This pattern of dodging action on progressive policy issues is clearly not helping to weaken the rise of right-wing Canadian nationalists. Instead, the Donald Trumps of Canada seem to be getting stronger.