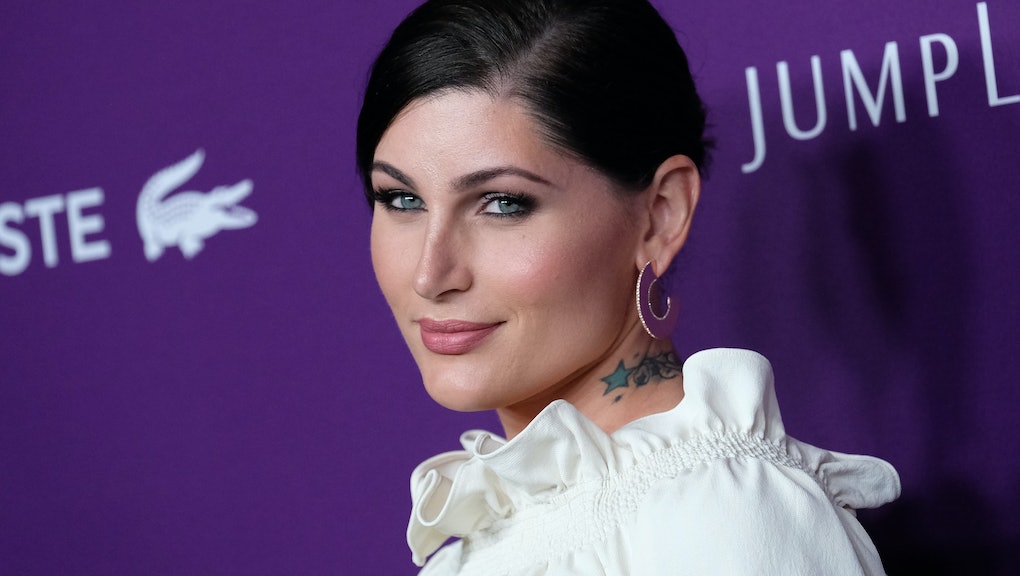 In some senses, it's business as usual for actress Trace Lysette, who, as we chat, is watching a screener of the new film Kiki in preparation for a Q&A she's moderating Friday night at Laemmle's Monica Film Center in Santa Monica, California. Earlier this month, she joined her pal Laverne Cox at the Grammy Awards, and just days ago she walked the red carpet at the Costume Designers Guild Awards with her Transparent co-star Amy Landecker.

But despite living what seems like the Hollywood dream, there's a distinct melancholy to her voice.

"You'll have to forgive me, I'm just a little bit beside myself that we're having to go through this," she said. "This" being news that first broke Wednesday evening that the Trump administration would withdraw and rescind President Barack Obama's historic Title IX guidance, which allowed transgender students attending public schools to use restrooms matching their gender identity.

The move was met with harsh and immediate backlash from Democratic politicians, including California Sen. Kamala Harris and Washington Sen. Patty Murray, notable transgender figures in the media like Cox and Caitlyn Jenner, as well as organizations such as the Human Rights Campaign, Planned Parenthood and the National Women's Law Center.

Below, Mic chats with Trace Lysette, who explains that though dark days may lie ahead, the darkest days remain behind us, and offers a message of hope to trans youth across the country.

Mic: In 2014, Mara Keisling, executive director of the National Center for Transgender Equality, told the Associated Press that President Barack Obama "has been the best president for transgender rights, and nobody else is in second place." In 2015, the Washington Post ran the headline "Obama's quiet transgender revolution." And just one day before Trump took office, Vice ran the declarative headline: "Obama was the most pro-trans president in history." How do you rate Obama's advocacy for the trans community during his time in office?

Trace Lysette: You have to keep in mind, I come from the old school, pre-Obama, where the word transgender was never uttered by a president. In my mind, Obama took the first steps to acknowledging us as human beings. For a lot of people in my generation, it was like a beacon of hope for us because it was like all of the sudden we were being talked about, we matter. Obviously, there's always more that needs to be done, but I think that he left the door open for the next chapter to be written. And, unfortunately, Trump followed up, and it seems like we're backtracking now.

That's my fear. They'll take us back to when we were less human, pre-trans movement, when we just had to get by by whatever means. And a lot of times that means just our daily existence can be deemed illegal because of systemic policing and hunting of trans bodies. If we can't exist in public spaces and use bathrooms, how can we feel welcome on school campuses? How can we thrive? How can we better ourselves? How can we ever get out of this ditch that we've been relegated to for so many years if we can't even feel safe using the bathroom?

Did you ever have experiences in your youth in line with what trans kids today might now be facing?

TL: I don't want this generation to have to go through the things that mine did. When I was watching Hidden Figures the movie and I saw Taraji's character have to leave her building to use the restroom, it reminded me of when I used to work at Bloomingdale's and I wasn't allowed to use the women's restroom because I transitioned on the job. HR had a meeting with me where I was told I could only use a single stall bathroom on the eighth floor, when I worked on the first floor in cosmetics. It was this big to-do every time I had to use the restroom.

To think about young kids having to go through things like that, being singled out and separated in an environment where they are supposed to learn, that's supposed to nurture them and teach them things, it makes me so angry. We have to amplify our voices and our love to our youth to let them know that we aren't going to lie down and take this.

What can the Ls, the Gs, the Bs, the Qs, the As, the Is — anyone not directly impacted by this ruling — do to stand with the trans community?

TL: You can march. You can use your voice, whether it's social media or talking circles amongst your friends and family to stress the importance of how this could very well be the beginning of a long trend of oppression. We might be one of the first targeted groups, but trust and believe, we won't be the last. It behooves all of us to band together now as marginalized people — and to get smart about how we fight. The sooner that we unify and find our strength in numbers, the sooner we can make some progress and really fight this to our full potential.

"It behooves all of us to band together now as marginalized people — and to get smart about how we fight."

I go to the Women's March and see 700,000 people banding together in Los Angeles, and then I'll go to a Black Lives Matter march and see a smaller number, and then I'll go a trans march and see an even smaller number, and I'm like, "Why aren't we showing up for each other? Why are we separating? Why are we allowing our tunnel vision to narrow our attention to only the issues that affect us directly when in actuality they are all linked?" I stand for everything. I don't want to show up for one thing; I want to show up for all of us.

If you had a moment with Trump's ear, what would you want to say?

TL: I'd say let's really look at the facts. Is this concern coming from a place of hate or factual evidence? I know for me, if I'm in a space of learning or a place of work and I need to use the restroom, that should take precedence over these unfounded claims of pedophilia. You're compromising someone's basic human rights. Trump as a businessman should be able to see through the BS and be able to relate to that point at least.

This will trickle down into bullying, into affecting self-esteem of these students, and suicide rates. The Trevor Project, who I've done some work with, told me that since the election the hotline calls are through the roof, they're higher than they've ever been. We know it's affecting us, but you're not showing us how it's affecting these conservative people who are raising this issue over nothing.

How do we instill hopefulness and a sense of belonging among our trans youth?

TL: Regardless of what's happening right now, this is still a better time to exist as a trans person than ever before in history. Know that you are loved, spoken for, and we will show up for you and fight this every step of the way. It's definitely not over.