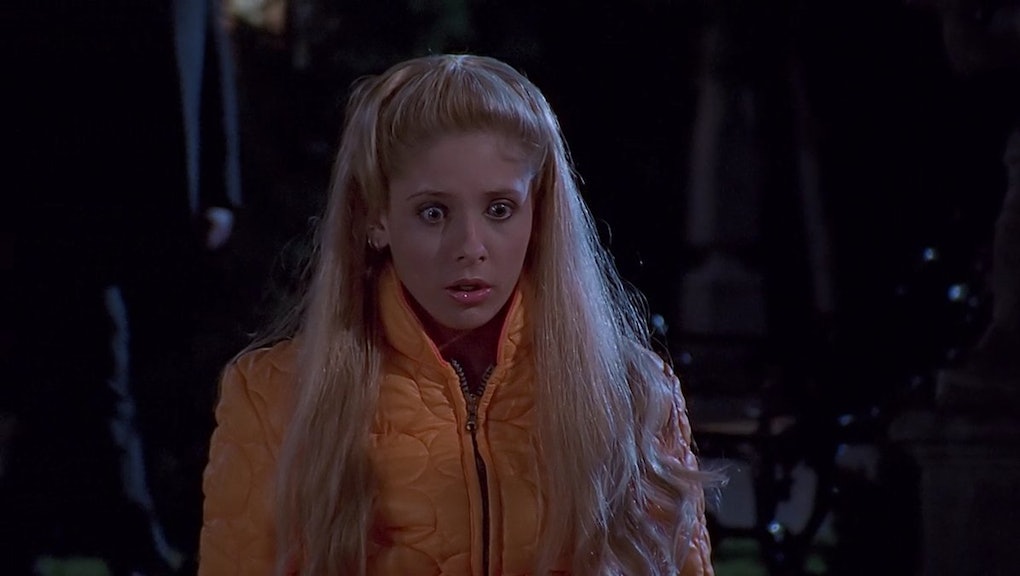 @BadBuffyOutfits proves even though she was The Chosen One, her outfits didn't always slay

While everything that was once old gets made new again (see: Arrested Development, Full(er) House, Gilmore Girls, Twin Peaks, Wet Hot American Summer, etc.), Buffy the Vampire Slayer, the cult classic television series that aired from 1997-2003 starring Sarah Michelle Gellar, has remained a rare beast, remaining culturally relevant without the need for a revival or a reboot.

For those Buffy diehards (myself comfortably among them), when nostalgia for Riley's "balls" poster or for the easter egg that was Faith telling Buffy "Little Miss Muffet, counting down from 7-3-0," foreshadowing both Dawn's arrival and Buffy's death two seasons later creeps upon us, we simply revisit the original series (thank you, in perpetuity, Netflix).

But now, thanks to Film Journal Associate Editor Rebecca Pahle, we can get a unique form of Buffy fix via Twitter thanks to Pahle's @BadBuffyOutfits account, which she started in January.

Pahle first discovered the series in 2001, during the break between seasons five and six. "I fell swiftly, and I fell hard," she said in an interview. (I relate: My bar mitzvah included not one, but two life-size Sarah Michelle Gellar stand-up dolls in homage to the series' central heroine.) It wasn't until five years ago, while revisiting the show for the first time, that she began to notice the outfits — particularly how bad they were.

"I noticed the clothes were terrible, which is something that completely passed me by when I was in the midst of early 2000s sartorial hell," she recalls. "Also, Buffy does this thing where characters will be dressed for completely different seasons in the same shot. Buffy's wearing a tank top and Willow's in a wool sweater, and one of the background characters is probably wearing a parka. I never noticed that before. It's hilarious."

Adding: "I harp on Willow a lot, but I wore awful hats and oversized cardigans and overalls, too, so it comes from a place of love."

The idea for the account came to Pahle while revisiting the show. "The idea had been floating around in my head forever. It inspired me to do a post on all the terrible hats Willow wore — far, far too many — and in hunting down screenshots of relevant episodes I was reminded how hilarious the clothes are generally. From there, it was a spur of the moment kind of thing."

The reaction, a slow-build, has been uniform in its appreciation for playfully recalling one of the lesser talked about aspects of the show. "It's a lot of people saying 'this is the account I've always wanted,' which is gratifying," She said. "There's always a lot of division going on in nerd spaces, but I like to think we can all come together in agreement that Xander wore some truly atrocious button-downs."

Of course there are those who don't quite get it: "The most unexpected reaction I've been getting is a lot of people, I guess teens/younger adults, saying 'I don't know what you're talking about, that's not bad, I would wear that." It frightens me, as someone who lived through the late '90s-early '00s, to see that fashion coming back. I have nightmares about those plastic choker necklaces coming out of my closet in the middle of the night and strangling me. All of this has happened before, and all of this will happen again."

With no signs of a revival in sight (Gellar recently mused on the subject in an interview with the Hollywood Reporter saying "I hope [Buffy] is somewhere on a beautiful beach located far away from any Hellmouth"), @BadBuffyOutfits serves as the perfect fix for those panging for their beloved Slayer.