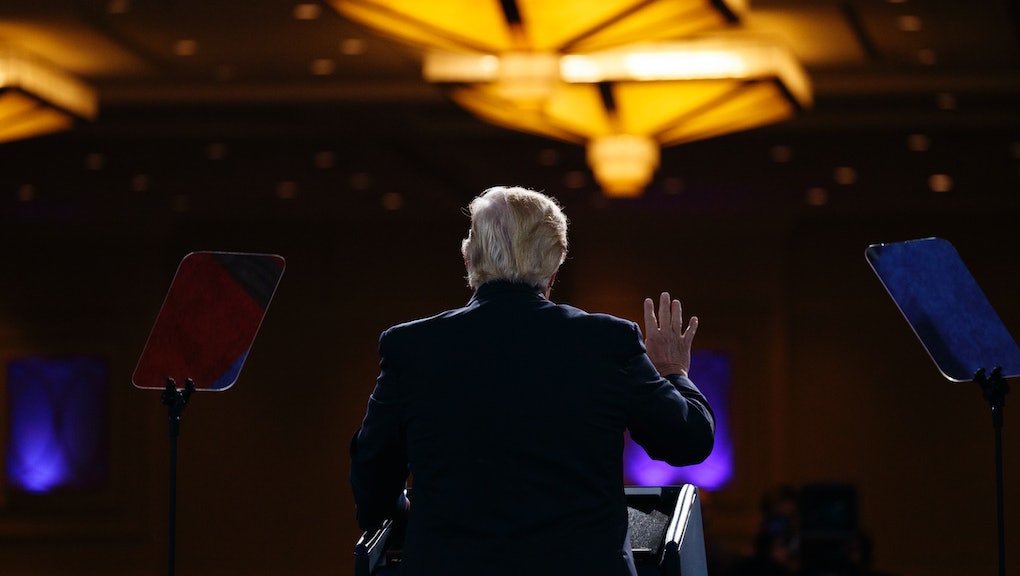 President Donald Trump still has a significant portion of the American public eating out of the palm of his hand.

A new national survey from Public Policy Polling shows 35% of Americans believe the mainstream media is an "enemy to the American people."

On the flip side, 53% of the poll's participants said they don't believe outlets like the New York Times, CNN and NBC News are pitted against Americans. But while PPP took the 53-35 split as evidence that Trump is "badly losing" his fight against the media, 35% is no small number — and when PPP broke down the data by outlet, the margin became even slimmer.

When asked who they thought was more trustworthy, Trump or the New York Times, participants responded with a 52-40 split. When asked the same question of CNN, ABC and CBS, the results were similarly neck-and neck with a 51-40 breakdown.

If Trump's tirade against the media isn't the slam dunk he and his supporters hoped it would be, it certainly isn't for lack of trying.

On Friday, Trump delivered a speech at the Conservative Political Action Conference in Maryland that the Washington Post said proved he was obsessed with the media. During his address, Trump slammed outlets for circulating what he said was "fake news" and even suggested the media itself was responsible for inventing the Trump anti-media narrative.

"In covering my comments, the dishonest media did not explain that I called the fake news the enemy of the people," Trump told the crowd. "They dropped off the word 'fake.' And all of a sudden the story became the media is my enemy."

He went on to call the media "dishonest" and suggest journalists were hiding behind their First Amendment rights.

Another standout statistic from PPP's latest poll: 61% of respondents still would very much like Trump to release his tax returns.

Both Trump and adviser Kellyanne Conway have staunchly denied that Americans are interested in his taxes at all. In January, Conway said Trump would not be releasing his tax returns, adding, "We litigated this all through the election. People didn't care."

Earlier that same month, Trump said during his first press conference as president-elect, "You know, the only one that cares about my tax returns are the reporters, OK?"

Yet, along with PPP's data, a petition with over one million signatures demanding Trump release his tax information suggests otherwise.

"The unprecedented economic conflicts of this administration need to be visible to the American people, including any pertinent documentation which can reveal the foreign influences and financial interests which may put Donald Trump in conflict with the emoluments clause of the Constitution," reads the petition, which was created on the day of Trump's inauguration.

All signs point to a widespread distrust of Trump — but those who think otherwise are often loudest, and have a president who is more than happy to amplify their opinions.