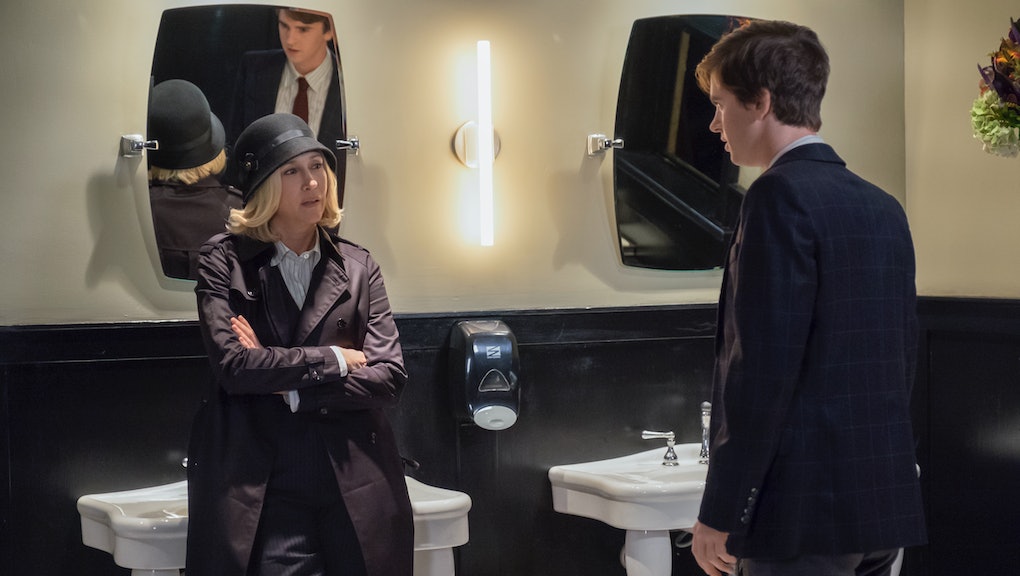 We gotta give credit where credit is due: Norman visiting Romero in prison at the beginning of season five's second episode, "The Convergence of the Twain," and letting him know that his hired hit man failed to do the job is pretty badass. It's basically Norman's "come at me, bro" moment, though Romero wasn't exactly phased by his bravado.

"I'm coming when you least expect it, so don't get too cozy up in that house all by yourself," he responds.

But Norman has more adversaries to deal with than Romero — and frankly, Romero's probably on the back burner because he is still, for now, in prison. Norma's brother Caleb leaves Dylan and Emma in Seattle, after Emma lets him know he'll never be part of their family, which leads him back to White Pine Bay in an effort to reconcile with Norma. It doesn't take long before he discovers that Norma died — or as one resident says, committed suicide.

Meanwhile, Norman's fixation with local store owner Madeleine reaches new heights when he not-so-subtly waits for her at a coffee shop across the street from her store. (Is it that crazy bumping into someone who works adjacent to said coffee place?) She invites him to a double date with her friend and her husband. Who's the husband? The guy who spent a previous afternoon having sex at the motel, David Davidson. Incredibly, David Davidson isn't his real name.

This is the show's formal introduction of Sam Loomis, the first character — aside from Norman — from Alfred Hitchcock's Psycho and one of the people who takes that version of Norman down. This is a less noble Sam, however, who threatens to beat Norman up if he lets Madeleine know that he was at the motel the other day with a woman. This is an intriguing subplot, mostly because Bates Motel has already revealed the mystery woman Sam is having an affair with. Unless we're being led astray by some overly deceptive trailers, Sam's lover will be Marion Crane, aka the woman from Psycho's infamous shower scene, who will be played by pop star Rihanna.

I'm still coming to terms with the fact that Rihanna is going to show up on Bates Motel; despite her appearance in a few season five trailers, it still feels like unbelievable entertainment, if not superfluous fan fiction. But that can be set aside for now, as Rihanna doesn't show up in the episode (however, if she'd been part of Norman's double date, I'd probably have had a seizure).

"The Convergence of the Twain" also sets up a financial outlet for Norman, which actually makes sense considering the motel has very few guests — just how is Norman going to have a livelihood? Turns out, former drug dealer Chick is going to help sell Norman's taxidermied animals for profit. He's also willing to just drop by the house and give him dead animals. This is just what Chick does, apparently.

Unsurprisingly, Norman's double date with Sam, Madeleine and Madeleine's basic AF friend is delightfully uncomfortable. It probably would've been dicey even without Sam and Norman shading one another left and right, but the tension between the two gives the dinner a near-transcendental amount of awkwardness. To make matter worse, Mother shows up in the men's bathroom to talk with Norman about his date. She's upset that he lied to her about why he was going out that night, and later in the car, is even more aggravated once she takes a look at Madeleine. She notices what the audience already has: Madeleine sure looks a lot like a young Norma.

"Are you going to be one of those guys?" Mother asks Norman, but if your son is worshiping your corpse in a makeshift basement freezer, you probably already know the answer.

Mother lets off some steam by downing bourbon at a bar, and the kicker is when she describes her job to the bartender as a "caretaker for a mentally ill person." In a sense, Mother isn't wrong: She's continually shielding Norman from all the atrocities the alternate personality has committed, which we now know includes at least one additional murder in the hit man Romero sent for him. And, to be sure, that number is only going to grow as Bates Motel reaches its conclusion.

The next person on that list may very well be Caleb, who, in a separate bar, runs into Chick after drinking through the sorrow of losing Norma. But their confrontation only riles Caleb up, and he quickly (and accurately) blames Norma's death on Norman, rather than a suicide. So he makes his way to the Bates house and hurriedly runs through the house to find Norman.

He ends up finding Norma's corpse in the basement's freezer, but before he can do anything, Norman whacks him from behind (it appears he only knocked Caleb out, instead of killing him). He's also wearing a dress and a wig — an eerie presage of the final moments of Psycho. However, Chick had followed Caleb to the house, and he sees Caleb on the ground, Norma's frozen corpse and a dolled-up Norman.