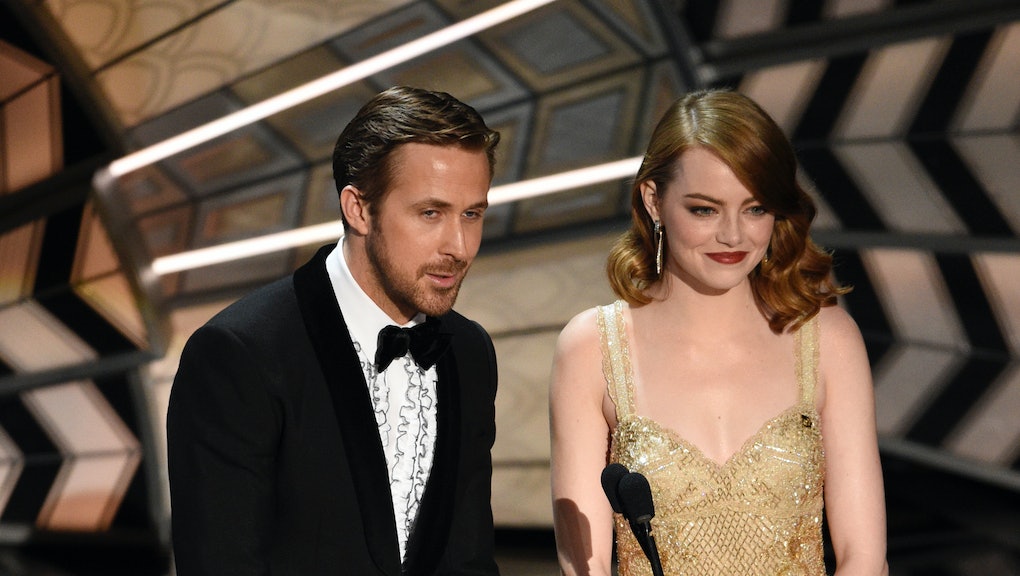 How many Oscars did 'La La Land' win and lose tonight? Here's the full tally.

Newsflash: La La Land did not win best picture. Though Warren Beatty opened the envelope and read the film's name, it apparently was a mistake. La La Land ended up not being a winner-take-all picture after all, predictions be darned. Despite forecasts that the movie would sweep several Oscars, it certainly saw its share of losses for the night.

The final math? La La Land won six categories and lost seven. It doesn't quite add up because the film received two nominations for best original song. One song won, which meant the other lost.

First, here are the categories that La La Land won:

La La Land was nominated alongside Arrival, Lion, Moonlight and Silence — and won.

La La Land won out to Arrival, Fantastic Beasts and Where to Find Them, Hail, Caesar! and Passengers.

La La Land's "City of Stars" beat its other song "Audition (The Fools Who Dream)," as well as Trolls' "Can't Stop the Feeling," The James Foley Story's "The Empty Chair" and Moana's "How Far I'll Go."

Here are the categories that La La Land lost:

Despite a confusing mix-up, La La Land did not win best picture. It lost to Moonlight. The other nominees in this category were Arrival, Fences, Hacksaw Ridge, Hell or High Water, Hidden Figures, Lion, Manchester by the Sea.

La La Land lost to Manchester by the Sea. The category's other nominees were 20th Century Women, Hell or High Water and The Lobster.

La La Land was up against Allied, Florence Foster Jenkins, Jackie and winner Fantastic Beasts and Where to Find Them.