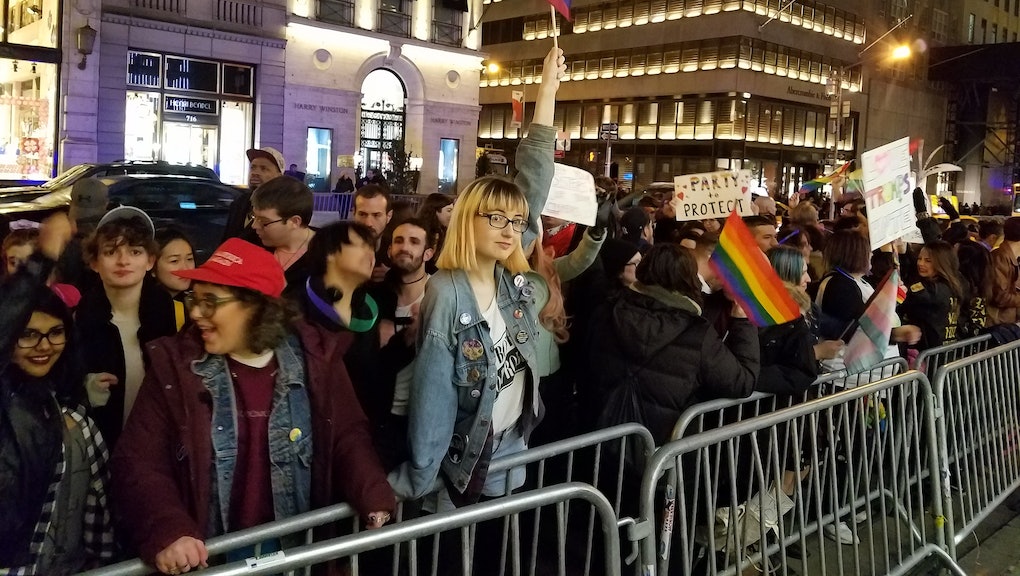 A crowd of LGBTQ+ activists and allies descended upon Trump Tower in Manhattan on Sunday for a Queer and Trans Dance Party/Protest.

Up to 150 or more participants attended over the first two hours of the event, which organizers wrote on Facebook was "a celebration of our diversity, our strength and our love, a declaration that even in the darkest times, we can come together and DANCE in the face of tyranny."

The protesters took special issue with President Donald Trump's recent decision to reverse a Barack Obama-era policy that required schools receiving federal funding to let transgender students use the bathroom of their choice.

"They think that men will pretend to be women and sneak into a women's room and sexually assault them," a 24-year-old trans woman identified as Tan told Mic in an interview. "But that literally never happens. In fact, a lot of victims of sexual assault are transgender women. So like that's their issue, that's what they want, that will be the compromise, but it's never an issue. What would be an issue is to force transgender kids, trans women to be in men's rooms."

"She's definitely more at risk," Tan added. "That's what we're here for. I'm a trans woman and I just want to be able to use the bathroom. And it would be a much bigger issue to force me to use the men's bathroom."

Another protester, Liz Dalton, told Mic: "I'm mostly concerned that [with] Donald Trump ... there's really no sense that policy matters, that word is bond, that really you should honor what you say because people are depending on the truth of you. I would really put nothing past this administration setting us back."

At another point in the evening, a small group of Trump supporters wearing the president's signature hats heckled protesters — who responded by leaving the cordoned area and dancing in a circle around them.

Here are some scenes from the night: