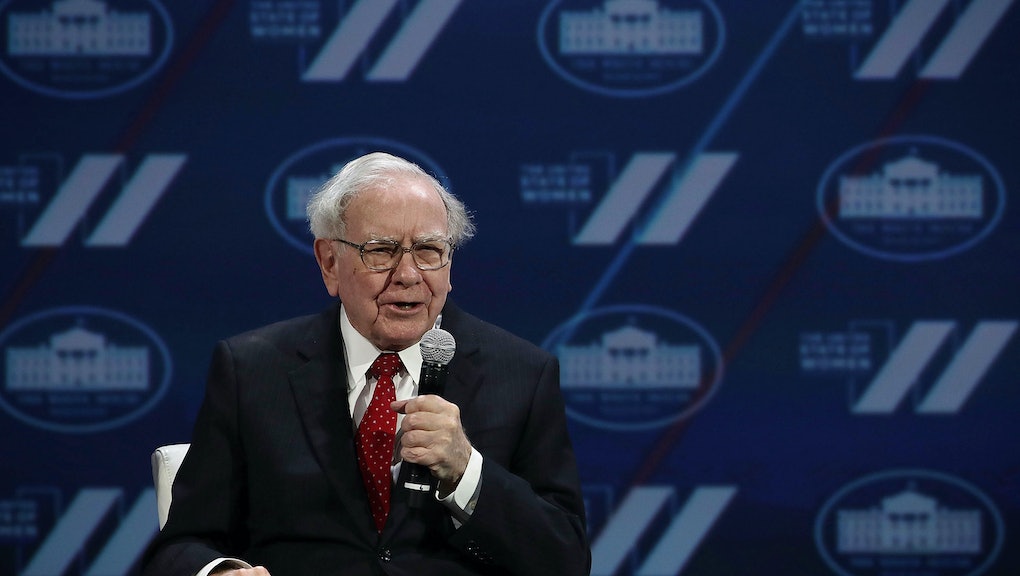 Warren Buffett shares how to get rich during turbulent times

Billionaire investor Warren Buffett is known for smart bets and the Oracle of Omaha on Saturday used his annual letter to Berkshire Hathaway shareholders to take an early victory lap on a bet he made nearly a decade ago: that expensive investment vehicles — hedge funds — were full of it.

Specifically, Buffett publicly wagered $500,000 in 2008 against Protégé Partners' Ted Seides, the only manager to take Buffett up on his bet that no investment pro could select five hedge funds that would outperform the overall market — measured using a passive S&P 500 index fund, which anyone can buy for cheap in a retirement account — over the next 10 years.

As the experiment nears its end, Buffett's conclusion is unambiguous: Comparing the performances of his and Seides' investment strategies, he wrote, "$1 million invested in those [hedge] funds would have gained $220,000. The [S&P 500] index fund would meanwhile have gained $854,000."

In other words, as Buffett points out, the stock market is a great bet over long periods and you don't even need to hold fancy investments, pay a ton in fees or have a lot of money (or a finance degree) to grow your wealth: "Both large and small investors should stick with low-cost index funds," Buffett wrote.

But the crux of Buffett's message — that Americans will be able to grow richer through investing over the long term — crucially requires that people trust the broad market, and believe that it will withstand economic threats. Buffett acknowledges that downturns can be frightening and inevitable: "Yes, the build-up of wealth will be interrupted for short periods from time to time."

Yet "it will not, however, be stopped," he wrote. This means if you follow classic advice — invest regularly in your retirement account and take on appropriate risk (i.e., buying stocks) if you're young — you should still become wealthy over time. You will need to learn to manage your own fear.

Luckily, frightening periods of time can actually be an asset, Buffett argues. Here's how individuals can make the best of these scary moments — as opportunities to dig in, invest, and grow richer.

Buffett says there are two kinds of fear

"The years ahead will occasionally deliver major market declines — even panics — that will affect virtually all stocks," Buffett wrote. "No one can tell you when these traumas will occur."

Just as in 2007, it likely won't be obvious even to experts when the stock market is about to take a nosedive. That's why it's so important to be prepared, Buffet argues: "During such scary periods, you should never forget two things: First, widespread fear is your friend as an investor, because it serves up bargain purchases. Second, personal fear is your enemy. It will also be unwarranted."

If you're sitting on a lot of cash in a savings account, for example, kudos to you. You should be prepared for short-term emergencies, with an account dedicated to worst-case scenarios, beyond your retirement savings. But if you can spare any of that cash, as Buffett points out, a market downturn can actually be a buying opportunity — at the very least to beef up your IRA. Importantly, you'll want to use the chance to buy inexpensive funds (think: diversified ETFs) and then hold them through thick and thin.

"Investors who avoid high and unnecessary costs and simply sit for an extended period with a collection of large, conservatively-financed American businesses will almost certainly do well," Buffett wrote.

Why you shouldn't pay huge fees for investment advice

Hedge funds are sort of like the VIP-room of investment options: They take your money and invest it in everything from stocks to real estate, but their main distinguishing feature is that they have high fees and really high minimum investments (often starting at $1 million), meaning you need to be a pretty high roller just to get in the door.

Buffett argues that those high fees weren't actually buying all that much in the way of higher returns, which is why he invited managers to bet that they could outperform a low-cost Vanguard S&P 500 fund.

Now Buffett says he expects the charity he chose to claim his winnings will be "eagerly opening the mail next January." Since January 1, 2008 (the period when the bet began), only one of the five hedge funds Seides selected has earned within firing distance of the S&P 500 index fund's gain of 85.4%.

How Buffett could have lost his bet

Buffett notes in his letter a major caveat — the last nine years for the market have been "neutral", and when things are good, having a skilled manager to "hedge" your bets for you counts a lot less than when things are bad.

In other words, Buffett suspects that had their been some sort of market crash or other headwind, the hedge funds might have fared a little better.

Still, in light of the fees, Buffett says for normal, everyday investors, trying to pick winners isn't going to be worth it. Especially over the long term.