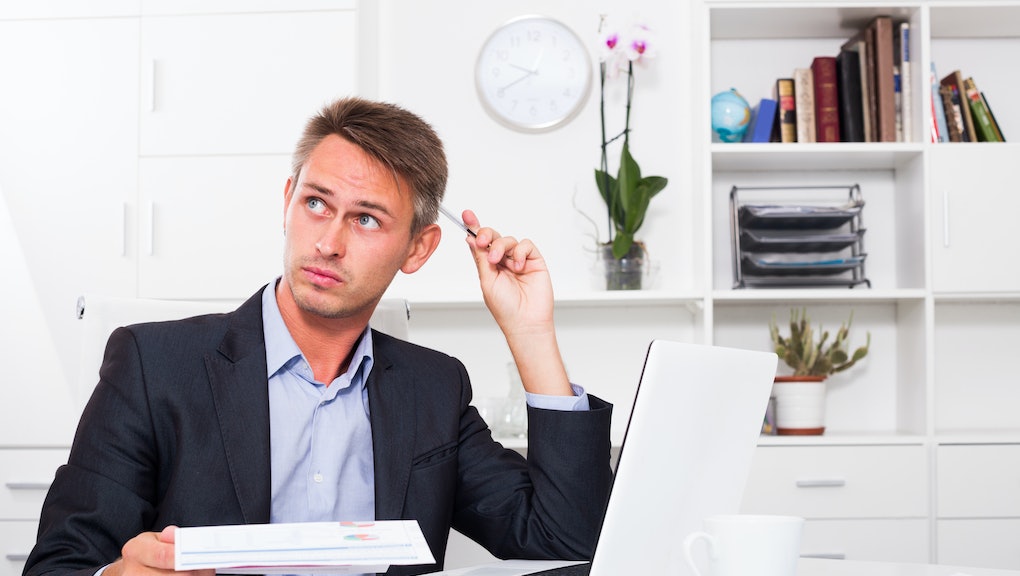 5 popular pieces of career advice you should actually just ignore

People love to give advice about pretty much anything — relationships, jobs, money, you name it. And without the sage counsel of those who came before us, where would we be? (Living in a van down by the river, probably.)

But don't just follow these clichés blindly. Some of the most popular advice is also seriously flawed.

Here are the most common bits of career advice to take with a grain of salt  — and the smarter advice to follow instead.

Of course you should try to find a career you love. But aiming for the stars in your very first job can be a recipe for disappointment.

In his 2012 book So Good They Can't Ignore You: Why Skills Trump Passion in the Quest for Work You Love, Cal Newport argues that the bromide to "follow your passion" is bunk. He says few people have deep abiding passions and that ultimately those initial interests have little to do with why people end up loving their work.

"Passion is not something you follow. It's something that will follow you as you put in the hard work to become valuable to the world," Newport wrote.

He adds that following your passion can be dangerous to your long-term stability and success, leading instead to high anxiety levels and chronic job hopping. Those who followed their bliss weren't blissed out. They were stressed out.

Instead, Newport found that people who had logged the many hours and completed the hard work to become excellent at something valuable were happier than those who let their passion lead them. In short, what you do for a living is less important than how you do it.

Many a friend, coworker or mentor — likely dogged by their own regrets of roads not taken — will advise you to "keep your options open."

The idea is that flexibility will work in your favor in case things don't work out as planned.

This explains why people prefer reversible options over iron-clad ones, according to Fast Company. We swipe right on hundreds of people on Tinder before we ever go on a date. We take five different internships before settling on a career. It also explains why employers often hire workers on a temporary basis before offering them a full-time job.

That wishy-washy approach can lead to lower levels of happiness, according to Harvard psychologist and author of the bestseller Stumbling on Happiness, Dan Gilbert. .

Once committed to a decision, Gilbert adds, thoughts of alternatives fall away and our "psychological immune system" kicks in to convince us that we made the best choice.

Remain undecided and you keep thinking about the potential downside of potential paths. Sure, having studied theater and psychology gives you a back-up plan when your Broadway dreams crumble, but it forces you to split your energy on separate goals when you could focus on just one.

As actress Uma Thurman told the Telegraph in 2005, "I don't have a Plan B and worrying about it is going to kill my Plan A, which is living the life I have right now and doing what I love to do while I'm blessed to be able to do it."

Specializing, or focusing on your Plan A, can take you farther because you get an outsized boost from being the best at something. While that takes time, it can also be quite rewarding — even for something that requires no natural talent or that is not that competitive or well-known.

There are few ideas about work ethic as widely accepted as "under-promise and over-deliver."  Even President Trump likes to brag about coming in "ahead of schedule and under budget," for his real estate projects.

Turns out, people don't like surprises. At least not that kind.

Studies show people get no significant bounce from delivering more than they promised. "Breaking one's promise is costly, but exceeding it does not appear worth the effort," concluded the authors of a 2014 paper published in Social Psychological and Personality Science on promises kept, broken and exceeded.

No disrespect to our 44th president, but working hard isn't always enough to get ahead.

Sometime after the last financial crisis "staying put" became the new "getting ahead," according to a 2012 article in the Atlantic. If you weren't getting laid off and were able to keep your job, you were moving as far ahead as possible. Working even harder wasn't going to get you any further.

What can help you get ahead other than being good at your job is working on your soft skills. Have an affable, easy-to-work-with attitude and make it known that there's not job too big, no job too small.

"Behavior involving politeness and regard for others in the workplace pays off," Christine Porath, an associate professor at Georgetown University's McDonough School of Business, writes in the New York Times about her studies on the matter. "Civility elicits perceptions of warmth and competence."

Better advice: "Work hard and play well with others."

5. "Don't leave a job unless you've been there a year"

The days of working for one company for 35 years and retiring with a full pension are gone. According to 2016 Bureau of Labor Statistics data, 23% of people leave their job within a year.

No doubt, job hopping is on the rise. "Over the last 20 years, the number of companies people worked for in the five years after they graduated has nearly doubled," LinkedIn reported in 2016. Millennials who graduated between 2006 and 2010 had an average of 2.85 jobs in the first five years after graduation, with the highest turnover among those working in media and entertainment.

Employers in this day and age get it. You're trying to accumulate experience and move to the best opportunity. When you're starting out in your career, especially, go for it.

So, leap at the right opportunity — then stay and make the most of it.