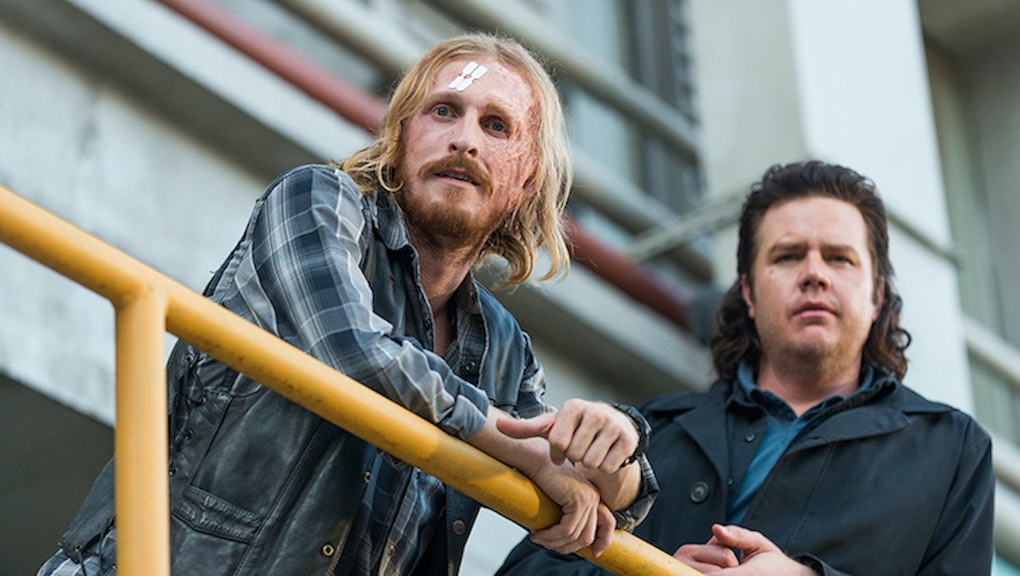 Will ‘The Walking Dead’ season 7 set up Eugene as a villain, and Dwight an antihero?

While Eugene's first day at the Sanctuary does feature the dreaded return of "Easy Street," the Alexandrian didn't have the same treatment as Daryl Dixon. Instead of eating dog food sandwiched between bread and deprived of sleep in a cold, lightless cell, Eugene has a huge room with a stocked fridge, a sofa, video games and a heady jar of pickles. The Walking Dead truly is a strange show.

Suffice it to say, Eugene has a better time at the Sanctuary — perhaps he's a bit too comfortable there. After watching Negan throw a Savior into a furnace, he doubles down on his devotion to the villain by letting him know that he, like the other Saviors, is "Negan."

"I am completely, utterly, stone-cold Negan," Eugene tells him. "I was Negan before I even met you. I just needed to meet you properly to know."

But is Eugene's loyalty to Negan a legitimate turn for the character, or is he (quite understandably) playing it up after seeing the punishment doled out to another member of the group? While fans might not want to admit that Eugene could be turning into a legitimate antagonist, there's reason to believe it could be happening. Back in January, actor Lennie James, who plays Morgan on the show, spoke with NME about characters who are going to change their loyalties over the course of the second half of season seven.

This dynamic could've been playing out in the latest episode, with Eugene making a turn to the "dark side." As for a potential antihero, look no further than Dwight. While Dwight wasn't exactly redeeming himself this week — he framed the Sanctuary's doctor, who was thrown into the aforementioned furnace — his comic book storyline would suggest he's eventually going to betray Negan to help Rick and Alexandria take him down. He could be the character who will "come over to the light." But don't expect him to do the right thing because he grows a conscience. Comic book readers know he's only looking out for himself.

James obviously doesn't mention anyone by name. However, there's few alternatives for this particular allegory. Hopefully, once the show reaches the inevitable "All Out War," Eugene will remain loyal to Alexandria, no matter how many jars of pickles Negan offers him.

The Walking Dead returns Sunday at 9 p.m. on AMC. Check out a sneak peak of the upcoming episode below: