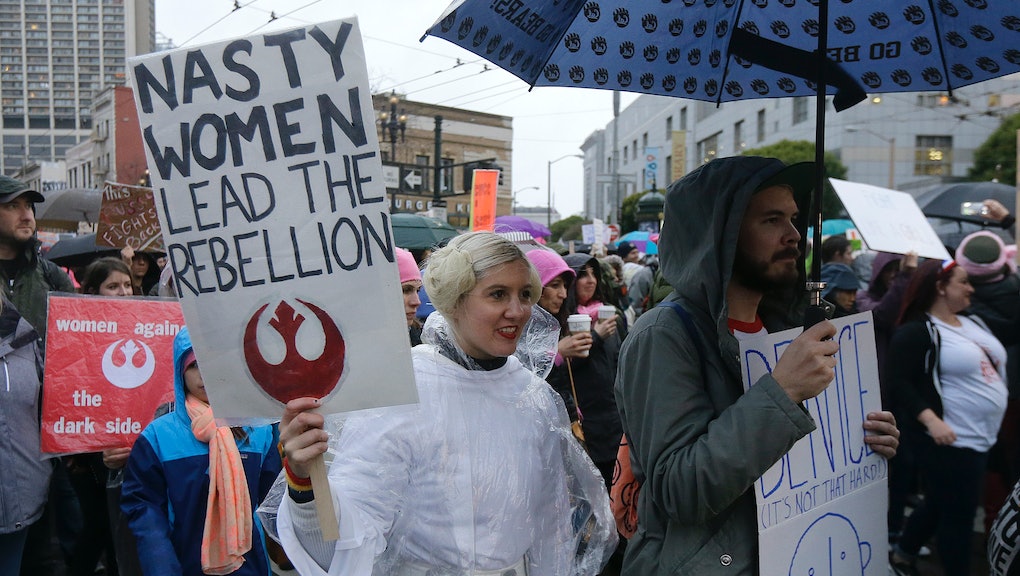 Instead of its first female president, the U.S. got an alleged misogynist and sexual assaulter in the White House. But feminists aren't standing down.

The day after Donald Trump's inauguration in January, millions of people around the world participated in Women's Marches — and for many, the fight for equal rights will go far beyond a one-day demonstration.

In honor of the International Day of the Woman, here are just eight feminists who should be on your radar this year.

Roxane Gay is a blogger, writer, speaker and professor widely known for her 2014 essay collection, Bad Feminist. You can look forward to Gay's next books, Hunger and How to be Heard, which the author pulled from Simon & Schuster following the publisher's decision to work with Milo Yiannopoulous. When the publisher revoked Yiannopoulous's contract, Gay continued to resist, writing that the company simply "realized it would cost them more money to do business with Milo than he could earn for them."

One of the few bright spots for Democrats in the 2016 election was the election of several women of color, including California Sen. Kamala Harris, who became the first Indian-American to serve in the U.S. Senate and the second African-American woman.

Since heading to Washington, D.C., the former California attorney general has championed equality, including introducing a bill that would ensure immigrants detained at U.S. borders have the right to legal counsel. After Sen. Majority Leader Mitch McConnell shut down another fierce feminist, Sen. Elizabeth Warren, on the Senate floor, Harris took to Twitter to turn McConnell's "Nevertheless, she persisted" line into a feminist rallying cry.

As the host of Full Frontal with Samantha Bee, the former Daily Show correspondent has literally become the feminist to watch. Bee, backed by a notably diverse writing staff, brings an essential female perspective to the male-dominated late night TV landscape, taking on such topics as Trump's "grab them by the pussy" comments, Catholic hospitals' stance on abortion and the misogyny female government leaders face.

Janet Mock is a transgender activist who's redefining what it means to fight for women's rights. Mock, the author of Redefining Realness, said in a 2015 interview about Hispanic and black trans women who turn to sex work: "If we aren't centering these girls and women and people in our politics, then our feminism is phony."

The activist recently penned an op-ed in the New York Times in response to the Trump administration's revoking of protections for trans students, and she has a new book, Surpassing Certainty: What My Twenties Taught Me, arriving in June 2017.

As the National Co-Chairs of the Women's March, Tamika Mallory and Carmen Perez — along with fellow co-chairs Linda Sarsour and Bob Bland — started a movement, and they aren't stopping now.

The organization has been continuing its efforts with its 10 Actions/100 Days Campaign, and is currently spearheading A Day Without a Woman on March 8. Even before their recent collaboration, Mallory and Perez were both dedicated activists: Mallory worked with the Obama administration to advocate for civil rights and served as the executive director of the National Action Network, while Perez serves as Executive Director for the The Gathering for Justice and founded Justice Leagues in NYC and California.

The 15-year-old star of Disney Channel's Girl Meets World uses her celebrity status for good as a staunch advocate for intersectional feminism and equal rights. Blanchard spoke at the Los Angeles Women's March in January and penned a 2015 essay on intersectional feminism. In the essay, the then-13-year-old wrote, "To only acknowledge feminism from a one sided view when the literal definition is the equality of the sexes is not feminism at all."

Al-Khatahtbeh, a young Muslim writer from New Jersey, has been working to ensure that Muslim women's voices are heard. In 2009, Al-Khatahtbeh founded MuslimGirl.com, a site whose mission is "normalizing the word 'Muslim' for both Muslims and non-Muslims alike." In 2016, Al-Khatahtbeh published her own memoir, Muslim Girl.

"People understand through empathy that hateful rhetoric targeting Muslims or other minorities — that that rhetoric doesn't happen in a vacuum," Al-Khatahtbeh said in an interview with Forbes. "It has real life and death consequences in our daily lives, and I think that people can only really understand it if they do access that empathy."

"I think that stories are the best way for us to increase that empathy, to humanize us and make those connections happen," she continued.