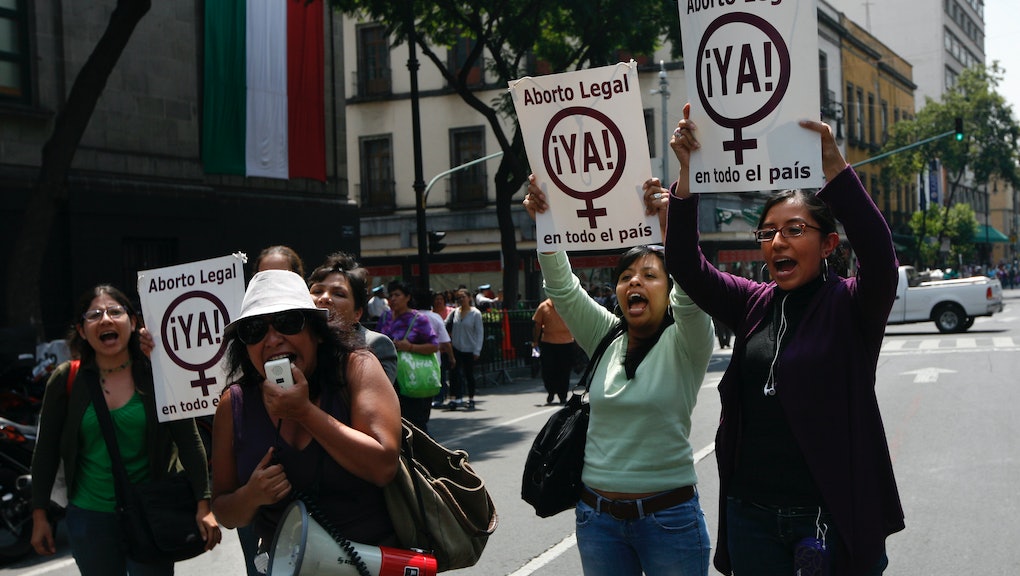 Within 48 hours of the historic protest for women’s rights on Jan. 23, President Donald Trump put millions of people around the world at risk with a stroke of his pen. Late last month, he reinstated the "global gag rule," which forbids the U.S. from giving global health assistance to any overseas organization that provides abortions, counsels or refers women to other providers for abortions, or advocates for the liberalization of abortion laws — even when done with nongovernment sources of funding.

Officially called the "Mexico City policy," the Reagan-era regulation has taken turns being enacted and rescinded since 1984 depending on which party has been in power. But Trump’s version is far more extreme than any enacted in the past. His policy multiplies the effect on U.S. funding fifteenfold and will wreak unprecedented damage on the health and human rights of people around the world, including many vulnerable populations in communities with few resources.

The newest iteration of this policy shackles U.S. foreign aid to religious and ideological requirements.

Under previous administrations, the only foreign nongovernmental organizations bound by the global gag rule were those that received family planning funds from the United States. Trump has now expanded the global gag rule to apply to recipients of all U.S. global health dollars. This means that a policy that previously restricted $575 million of foreign aid now implicates the distribution of $9.45 billion annually — including funds addressing nutrition and other public health challenges like HIV/AIDS, malaria and tuberculosis.

The newest iteration of this policy shackles U.S. foreign aid to religious and ideological requirements that undermine evidence-based public health interventions and broader human rights. These provisions dictate a narrow view of morality under the guise of public health, doing grave damage to the millions of people who depend on U.S. aid for their health and wellbeing. They also undermine the national interest of the U.S. in promoting healthy, stable and prosperous societies.

Here are four reasons the global gag rule will harm women, girls and communities around the world:

To state the obvious, less abortion information and care will be available because of the global gag rule.

As a result, people will increasingly seek abortions that are medically unsafe, dangerous and life-threatening. Indeed, the World Health Organization estimates that nearly 13% of all maternal deaths globally are a result of unsafe abortions; of the 21.6 million unsafe abortions provided worldwide each year, 18.5 million are performed in developing countries. Tragically, these numbers will rise.

The global gag rule will have a chilling effect on health care providers who offer contraception and family planning services.

Out of fear that they might lose critical global health funding from the U.S., health care providers and advocates may stop offering people any information about their  reproductive health — even though the policy requires that they only refrain from providing information about abortion. This would sharply restrict the information that women, girls, LGBTQ people, sex workers and others need to make healthy and informed decisions about their bodies.

Evidence shows that restricting access to abortion information and services increases rates of unintended pregnancy, abortion, maternal mortality and poor health outcomes. According to estimates by Marie Stopes International, one of the largest providers of reproductive health worldwide, over the next four years,  the Trump version of the global gag rule will cause at least 6.5 million unintended pregnancies, 2.2 million abortions, 2.1 million unsafe abortions and 21,700 maternal deaths.

The new global gag rule will likely have consequences beyond the realm of family planning and reproductive health.

Given that the policy now applies to all U.S. global health dollars, there could be vast implications on global efforts to curtail other epidemics, such as the recent Zika virus outbreak in Latin America. This is because, for example, if a practitioner at a rural clinic in a developing country provides information on abortion to even one woman as part of a broader set of potential options, the clinic will lose all U.S. global health funding to combat other key health concerns in their community, including maternal and child health, HIV/AIDs, tuberculosis and many more.

Much like other harmful policy provisions — such as the U.S. government’s longstanding anti-prostitution pledge, which requires recipients of AIDS relief (PEPFAR) dollars to oppose sex work as a condition for receiving funds — the global gag rule undermines other U.S. global health goals. It exacerbates stigma and discrimination against the very populations and communities in most need.

For these four reasons, this new sweeping Trump administration version of the global gag rule will have far-reaching and devastating effects on people and communities around the world. As we find ourselves caught up in a daily whirlwind of executive orders, tweets and breaking news, we must remain clear eyed about the damage being done to the rights of people to control their own bodies and lives. We need to make our voices heard, fight this radical attack on human rights and protect the U.S. national interest by upholding the core principles of our foreign policy.