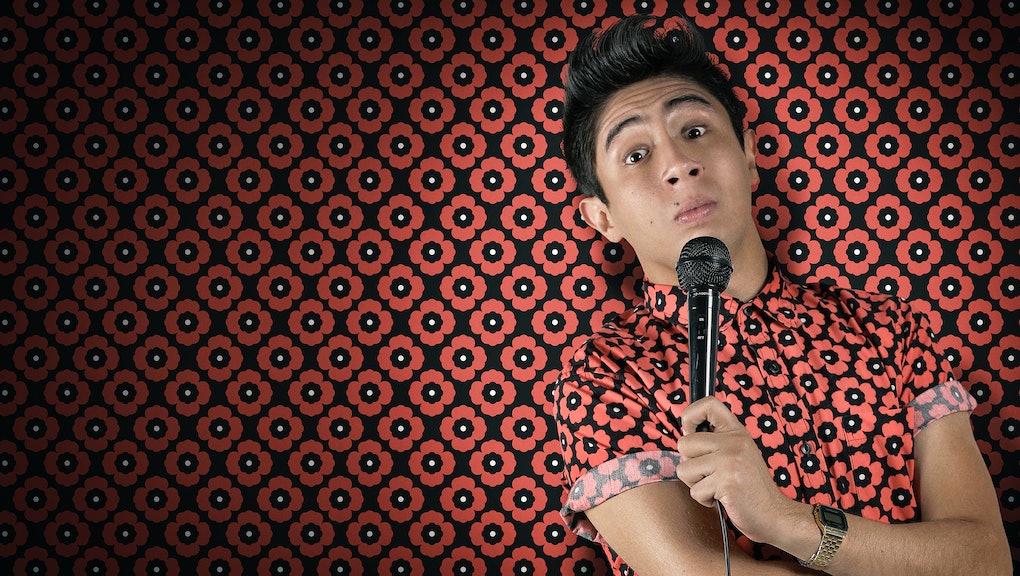 Before I saw Daniel Sosa pop up in my Netflix stream, I had never heard of the young Mexican comedian. Though I follow Hispanic and Latino media, it is impossible to keep up with everything as there are simply too many viewing options available these days. Even with the supersaturation of content, we still don't see enough well-rounded characters who are women or people of color. We also don't see enough variety in terms of Spanish-language content.

Sosa's Netflix special, called Sosafado, was released on Netflix on Feb. 3. The 77-minute special touches on everything from priests to Tupperware. Sosa, 23, who became famous because of his Vine videos, excels at accents and situational comedy.

That's why it was refreshing to see Sosa on Netflix, which continues to fill the gaps left behind by broadcast television. Less than two years after ABC canceled Cristela, Netflix produced Cristela Alonzo's stand-up special, Lower Classy. Netflix also produced One Day at a Time, a reboot of the Norman Lear classic, but this time featuring a Cuban-American family. In fact, Netflix didn't just buy the rights to Sosa's special; the online platform actually produced it. In other words, it is a Netflix original in Spanish and in a genre where traditional television doesn't typically deliver in Spanish.

Sosa is accessible to English speakers too; the stand-up special is fully translated via subtitles. While the subtitles don't quite capture the flavor of the Spanish jokes, they definitely allow for the special to be enjoyable for English speakers. After all, the United States is responsible for producing many of the globe's most popular movies and television shows.

So it's high time that English-speaking Americans accept subtitles as part of their viewing experience at least on occasion. There's no reason why Sosa should have to perform in English. Spanish is his native language and his language as a performer. Yet in Trump's America, mass promoting a Spanish-language stand-up special on a major media platform feels like a subversive act — and that is a boon to multiculturalists everywhere.

The politics of subtitles

Meanwhile, Trump's wife, Melania, speaks five, possibly six, languages. Despite this, it appears unlikely she will assume the traditional responsibilities of first lady. The first lady often takes charge of entertaining foreign leaders and their company at the White House (Jacqueline Kennedy, who was fluent in French, was an example of how foreign language skills can help accomplish this task). Might Melania watch Sosa? It's much more likely she's amenable to subtitles considering her multilingual skill set. But if she were to watch Sosa, she would probably do it alone. It's safe to assume Trump wouldn't join her, because this is a man who believes we should only speak English in America.

Unlike Barack Obama, who speaks basic Indonesian, or George W. Bush, who speaks some Spanish, Donald Trump does not speak a foreign language. He even made fun of Jeb Bush for speaking Spanish. Trump is very proud to speak English and only English (and maybe speak it better than critics actually give him credit for). He does not think it is necessary to speak other languages because, as he sees it, he lives in the United States, where most people speak English. In fact, Trump has not sat down for a Spanish-language media outlet since June 2015, when he announced his candidacy for president. He also ran an English-only campaign, unlike Hillary Clinton, who ran Spanish-language ads. His administration also removed the Spanish page on WhiteHouse.gov.

Without a basic grasp of another language, it must be difficult for Trump to understand the value of other cultures. He does not seem to appreciate what he is missing, which at least partially explains his immigration policies.

Even if Trump could be persuaded to watch the special, he probably wouldn't enjoy it. He doesn't appear to know enough about other cultures to even put himself in another culture's shoes. Humor requires exactly that: empathy. Humor is one of the hardest things to translate because there's so much cultural background you need to get why something is funny. Something that would get laughs in one culture might get nothing but blank stares in another, even with the work of a skilled translator.

The arts and entertainment solution

Instead of welcoming other people and cultures, Trump chooses to alienate them. He could laugh at Sosa's jokes, but that's unlikely to ever happen. Trump's inflammatory remarks about Mexicans, or "the Mexican thing" as Vice President Mike Pence called it, do not suggest a man of acceptance.

After calling Mexicans "criminals" and "rapists" (and defending the comment) during his presidential campaign, Trump still failed to appoint a single Latino to his Cabinet. More than ever, Latinos need affirmation that they count. If Trump cannot deliver on that front, at least arts and entertainment can offer their own solutions. Say, Spanish-language Netflix specials such as Sosafado or the animated children's series Las Leyendas/Legend Quest.

I hope that Netflix will continue to produce Spanish-language content under the Trump administration. This especially goes for comedy. We will need to laugh over the next four years to keep sane.