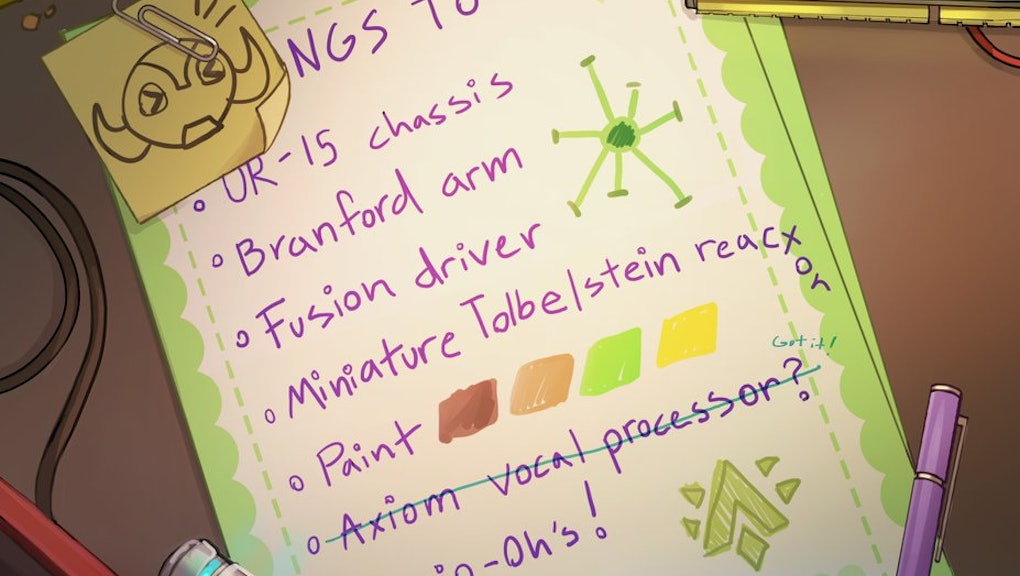 The Overwatch team has been teasing a new character for several days now, though cryptic tweets and a blog post on the official Overwatch site. This character's name is Efi Oladele, a 11-year-old genius inventor from Numbani. It's still not clear whether Efi herself will be a new character, or if she's simply inventing some kind of robot that will eventually be the playable one.

Most recently, the Overwatch twitter posted an image of Efi's list of "things to get" — though it probably includes a bit more dangerous technology than your run-of-the-mill grocery list.

Blizzard is known for hiding all sorts of little hints and clues in these kinds of teases for upcoming content, so we did our best to go through this image, item by item, and figure out what it all could mean.

OR-15s are defensive robots on Numbani — you know, the ones that got smashed up in the attack on the Numbani airport.

In the fictional interview that revealed her, Efi Oladele cited OR-15s as an inspiration for the kind of creation she might like to invent someday. So it's possible the attack on the Numbani airport was the motivation she needed to start building something.

This does not seem to be a term that's been used in Overwatch lore up until this point. No idea.

Again, this doesn't seem to be a reference to anything specific in Overwatch lore, but it's probably some kind of power source.

A Tobelstein reactor — which Efi presumably misspelled as "Tolbelstein" — seems to be the technology used in Zarya's energy cannon. Some players are theorizing that this means Efi is building a robot that will have some kind of gravity manipulation abilities, but that's not clear yet.

What's the deal with those paint swatches?

That's probably a sneak peek at what colors we can expect this new robot to sport.

What's that sketch in the upper-left corner?

That's probably the head of whatever robot Efi is constructing. It looks a lot like the smashed OR-15s on Numbani.

What's that little triangle-shaped logo in the lower-right corner?

That's not clearly linked to anything in particular, but some people are theorizing that it's somehow related to an Omnic's designs that appear in several ads in Numbani.

It's a Lúcio-branded cereal that makes an appearance in one of Lúcio's sprays. Efi needs to stock up, pronto. Gotta fuel that beautiful, genius brain of hers.

For more on Overwatch, check out the rest of what Mic has to offer. Here is the latest on the rumored new Overwatch hero, a list of our predictions for what seasonal events might appear in 2017, an interview with the creator of an awesome new Overwatch zine, our definitive ranking of every Overwatch hero and a roundup of awesome gender-bent Overwatch cosplay.