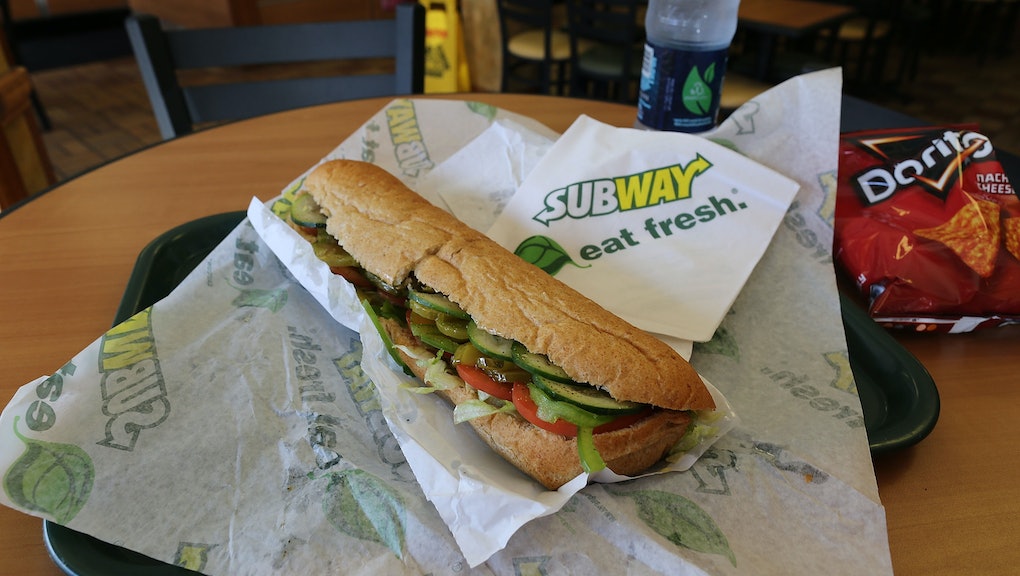 What's really in fast food chicken products? You might not be getting what you pay for, according to a new investigation.

The study: The lab tested samples from each sandwich, then isolated three smaller samples to DNA test. Researchers then averaged the score of the samples.

Since Subway scored exceptionally low compared to the other chains in the study, the researchers conducted additional tests on the Subway oven-roasted chicken sandwich and the sweet onion chicken teriyaki. Researchers tested five additional samples from the chicken in each sandwich.

The other chicken products scored remarkably better: The best chicken product was the A&W chicken grill deluxe, with an average of 89.4% chicken DNA.

The rest of the results were as follows:

Why don't these chicken products have 100% chicken DNA?

Seasoning or marinating meats will make a chicken product contain less than 100% chicken DNA, CBC reported. But it's possible that the Subway chicken scored so low because it is a "restructured" product.

Ben Bohrer, a food scientist at the University of Guelph, told CBC that restructured products contain small pieces of meat mixed with other ingredients in order to preserve the meat and make it taste better. (It also can help it last longer and cost less to produce.)

One famous example of a restructured fast food product? The infamous McRib, a "faux pork chop" that is essentially pork meat reshaped like a boneless rib, NPR reported.

But when it comes to Subway chicken products that are mostly soy, consumers on Twitter weren't lovin' it.

The news is a sad reminder that when it comes to fast food, looks (and marketing) can be deceiving.

A previous study on chicken nuggets found that the nuggets from popular fast food chains contained a mix of meat, fat, connective tissue and ground bone, NPR reported. In other words, the nuggets are a far cry from the lean chicken meat you'd buy in a supermarket aisle. With so many filler ingredients and lots of fat, they aren't necessarily a good source of protein.

Subway faced public backlash two years ago when people petitioned the company to remove azodicarbonamide, a chemical used in yoga mats, from Subway breads. The company was allegedly already in the process of removing the chemical before the outcry.

That carby scandal might be behind them, but now it appears that consumers are crying foul over Subway's fowl. (Sorry not sorry.)

Kevin Kane, the public relations manager for Subway Global, sent the following statement in an email:

The accusations made by CBC Marketplace about the content of our chicken are absolutely false and misleading. Our chicken is 100% white meat with seasonings, marinated and delivered to our stores as a finished, cooked product. We have advised them of our strong objections. We do not know how they produced such unreliable and factually incorrect data, but we are insisting on a full retraction. Producing high quality food for our customers is our highest priority. This report is wrong and it must be corrected.