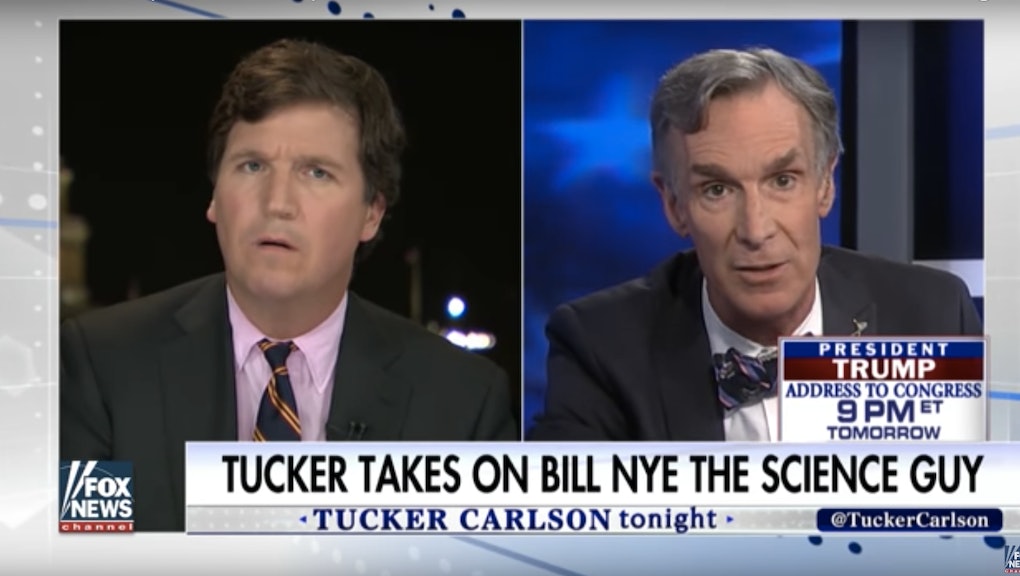 Tucker Carlson seems to invite experts on his show for the sole purpose of yelling at them. On Monday night's episode of Tucker Carlson Tonight, he came for Bill Nye the Science Guy.

This was a mistake.

In attempting to discredit Nye's theory that climate change denial is really just cognitive dissonance — what happens when a person is confronted with concrete facts that contradict their existing beliefs, Nye explained — Carlson proved him right.

Carlson did not accept that. The Fox host spent the vast majority of the nine-minute interview asking Nye to answer questions about climate change using facts, which Nye did — his specialty, after all, is breaking down complex scientific concepts so kids can understand them.

Carlson's speciality? That would seem to be shouting over the guests on his show (see also: Carlson's belligerent exchange with Teen Vogue writer Lauren Duca back in December). In the interview, Carlson continually drowned out the very explanations he asked to hear. Nye never yells, but he did offer numbers, comparisons and facts to support his assertions.

"So much of this you don't know," Carlson interjects toward the end of the segment, cutting off Nye's response in a spectacular real-time example of cognitive dissonance. "You pretend that you know, but you don't know, and you bully people who ask you questions."

If Carlson doesn't understand, it's likely because he wasn't listening. As Nye points out, after asking a question the Fox host interrupts him in less than six seconds, making for a wholly frustrating experience for the viewer — and ostensibly for the guest himself.

Watch it below, if for no other reason than to behold the spectacular roller coaster of human emotion that is Nye's face (see the 4:42 mark):