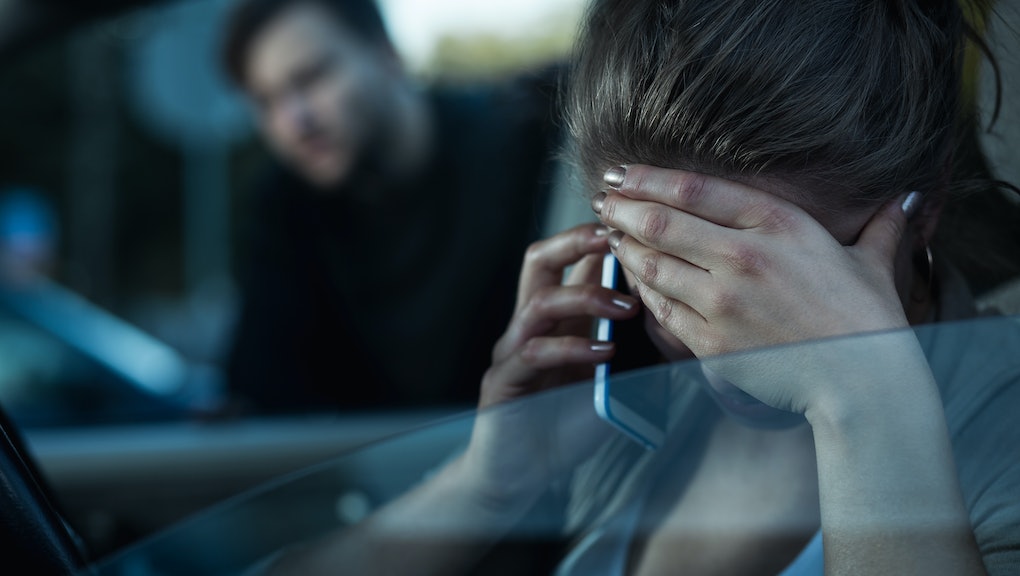 The dark side of mobile tech: How spyware empowers abusers and leaves us vulnerable

After nine years of marriage, and despite having no money, no credit and few job prospects, Taylor Horwitz (not her real name) filed for divorce from the husband who beat her when she was pregnant. She packed her bags and moved from Phoenix to Chicago for a new start.

Once settled in her new home, Horwitz began seeing a vehicle sporting Arizona license plates in her driveway. Alarmed, she searched her own car, where she found a GPS tracking device tucked in her wheel well.

"Even when it's over, it's never really over," Horwitz said.

Innovations in mobile technology have made everyday life exponentially easier and safer, but technological advancement can also mean vulnerability for people like Horwitz. She is one of 10 million women and men affected by domestic violence each year. Though the exact number of abusers who engage in digitally assisted stalking is unknown, organizations like the National Network to End Domestic Violence have noted a rise.

In the days before cell phones, stalkers relied on tools like vehicle odometers to track victims' whereabouts. If a husband knew his wife's employer was located four miles from home — and the car's mileage read 60,000 miles at the beginning of the day — anything beyond 60,008 miles that evening could signify infidelity or a trip to the police station.

Then came GPS — and the dangers became even more severe.

GPS apps tilt the scales in favor of stalkers

As deputy director of the Safety Net Project at the NNEDV, Erica Olsen is a leading expert in the Venn diagram of domestic violence and technology. Leading up to the debut of the smartphone, NNEDV noted a rise in stalking using GPS devices like the one Horwitz found attached to her car.

Olsen says that in the past, if a woman who was being tracked fled her situation, it would be difficult for a stalker or abusive partner to find her again. That was before the latest incarnation of GPS technology.

According to a survey NNEDV conducted in 2012, 72% of some 750 victim service agencies nationwide have reported clients being tracked by assailants using a variety of GPS-enabled services or devices like the one Horwitz found.

One such tool is mSpy. For $29.99 per month, an mSpy user can access a target's text messages, photos, videos and emails; check call history; track GPS location; and, with a premium upgrade, even block incoming calls. The company's disclaimer specifies that the software is intended "for legal uses only."

Despite boasting more than a million customers, only four mSpy employees — all of whom have private profiles — are connected on LinkedIn. It is one of many apps that experts like Olsen say tilt the scales in favor of stalkers.

The dark side of mobile technology

Horwitz, the mother of two teenagers, met her husband in 2002. She was going through a divorce at the time and was still reeling. A former boss, he "[swept] me off my feet," Horwitz said. He supported the newly single mother financially and emotionally.

Then came the gaslighting and abuse. Horwitz believes her husband told her friends she was a mentally ill alcoholic and got her fired from her job. Soon into their marriage, Horwitz became pregnant. Early on in the pregnancy, her husband unleashed on her, and with a kick to the stomach, she lost the baby.

Once upon a time, Horwitz could have escaped without a trace a bit more easily. Today, devices that allow abusers to track their partners can be found anywhere.

The tracker Horwitz found was black and discreet, attached to the front left wheel well. Following a bad experience with the police while trying to secure a restraining order against her husband, Horwitz decided not to report it.

While the device Horwitz found was on the exterior of her vehicle, Verizon's primary GPS device for automobiles, the Hum, sits snugly in a VPN port beneath the car's steering wheel. For $10 a month, it automatically sends roadside assistance alerts, connects you to a mechanics hotline and diagnoses engine light issues. It also allows drivers to remotely locate their vehicles if stolen.

Digitally assisted stalking is not limited to physical devices. Spyware, malware and hacking tricks that remotely activate another person's computer camera are among the other technologies used in digital stalking.

Susan McGregor, assistant director of the Tow Center for Digital Journalism, said a stalker might start with something as simple as his wife's maiden name. Family locating services such as AT&T's FamilyMap allow users to track the GPS locations of other members on their plan up to 150 feet. To enable such services, you must prove you're the owner of the account through a series of security questions.

"The failure of authentication in all consumer-based systems right now is actually a huge public policy issue," McGregor said. One example is credit card companies not being liable for authentication failures.

Between January and August 2014, Digital-Trust — an organization that provides support and research to digital stalking victims and organizations — experienced a 440% increase in digital abuse victims turning in devices for forensic examination, which can take up to 18 months. Spyware is extremely difficult to detect — it takes time and resources, and police departments often have to use two types of software to scan the device and conclude whether it's been compromised.

"Most departments definitely can't afford to have two," Olsen said.

The tech market is responding to such detection deficiencies by creating new products. For example, Olsen is testing an application called a packet sniffer that helps detect spyware or other invasive programs installed on a cell phone. Because packet sniffers can themselves be detected by spyware, Olsen and her team are not yet recommending the product for fear it could escalate retaliation from abusers when their covers are blown.

As for detecting spyware without notifying potential stalkers, "We're not there yet," Olsen said.

When discussing the role of those who create and distribute technology that makes it easier for stalkers, it might be helpful to look at social media.

"Social media is like a knife," tech ethicist David Ryan Polgar said. "It can inflict pain or carve a future that is more socially just."

Polgar pointed a potential shift on the horizon as social media becomes more corporate. "Do you think Disney is going to own a brand that is associated with misogyny and harassment?" he asked, regarding Disney's decision not to purchase Twitter. Polgar's hypothesis is that larger corporations buying into tech ventures may see anti-regulation practices, the proliferation of trolls and online ISIS recruitment as bad for business.

"Shouldn't Craigslist get in trouble because they are openly allowing prostitution?" Polgar said. "The tech industry never really knows the Orwellian [line] is — when to say 'that shit's creepy.'"

Polgar traced this phenomenon to what he called a "cyber-liberation ethos," a culture of Julian Assange, whose WikiLeaks organization hinges upon the notion that regulation of information is sacrilege. Polgar calls it digital libertarianism.

Hope for the future

Without conclusive data on the numbers of victims and nature of stalking crimes, regulation seems a distant goal. Optimists might also point to the fact a stalking app called StealthGenie became the first of its kind to be taken off the market when its founder, Hammad Akbar, was indicted. The charges weren't related to stalking or harassment, though; Akbar was charged with federal wiretapping, including conspiracy to market and sell a surreptitious interception device, according to Wired.

In the absence of laws that specifically address digitally assisted stalking, the greatest hope in the digital arms race in which survivors like Horwitz find themselves caught, may be for grassroots advocates to get ahold of the latest GPS-technology, products like packet sniffers, before tech stalkers catch wind.

Mic has reached out to mSpy and other apps and devices mentioned for comment and will update this post if we hear back.

Horwitz's name and other identifying information has been changed to allow her to speak freely on private matters.