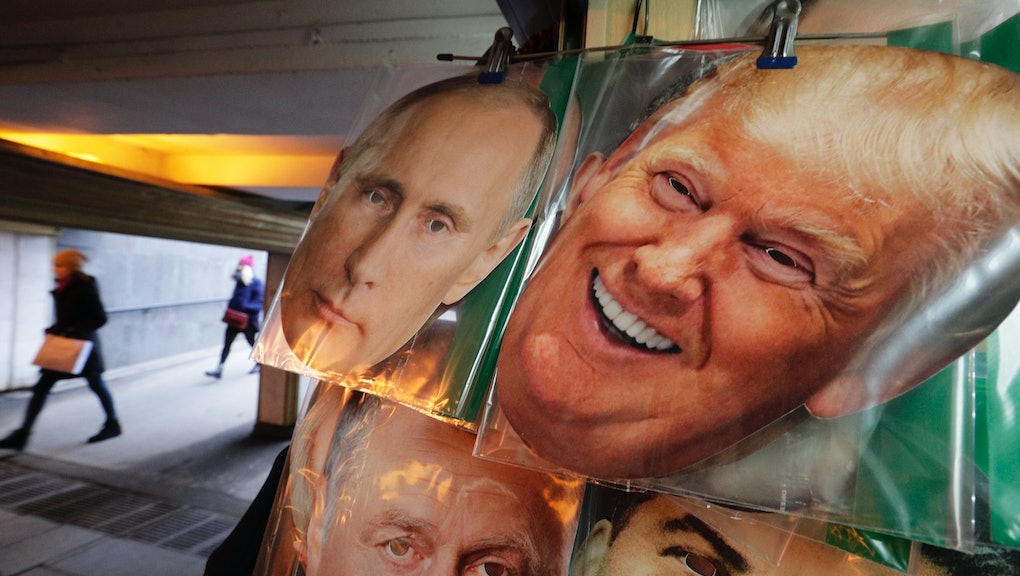 Hardly a day goes by when the question of President Donald Trump's connections to Russia aren't on the front pages of major American newspapers.

Trump's history of infatuation with Russian president Vladimir Putin has been well-documented.

Now it's time to see what's changed in the past year, long after Trump asked if Putin, "will become my new best friend."

Trump's praise for Putin continued through 2016 at least in part because Trump heard that Putin had praised him. On Feb. 17, 2016, Trump said, “He called me a genius. He said Donald Trump’s a genius... he said some good stuff about me.”

Over the last year, Trump has repeatedly said that the U.S. and Russia can work together. On April 27, 2016, he said, "We desire to live peacefully and in friendship with Russia and China. We have serious differences with these two nations, and must regard them with open eyes, but we are not bound to be adversaries. We should seek common ground based on shared interests."

Yeah, I have no comment on that. No comment.... I know Russia well. I had a major event in Russia two or three years ago — Miss Universe contest — which is a big, incredible event, and incredible success. I got to meet a lot of people. And you know what? They want to be friendly with the U.S. Wouldn’t it be nice if we actually got with somebody?

On July 27, 2016, Trump seemed to concede that Russia was not actually being friendly when he said at a press conference that, "I would treat Vladimir Putin firmly, but there’s nothing I can think of that I’d rather do than have Russia friendly as opposed to the way they are right now, so that we can go and knock out ISIS together with other people."

His statement also implies that good relations with Russia are a high priority for his administration.

In that same July press conference, Trump made a rare concession to having done business with "Russians":

What do I have to do with Russia? You know the closest I came to Russia, I bought a house a number of years ago in Palm Beach, Florida. Palm Beach is a very expensive place. There was a man who went bankrupt and I bought the house for $40 million and I sold it to a Russian for $100 million including brokerage commissions. So I sold it. So I bought it for 40, I sold it for 100 to a Russian. That was a number of years ago. I guess probably I sell condos to Russians, okay?

It is important to note though, that there is nothing inherently suspicious about selling condos to Russian nationals.

Trump implies Hillary Clinton is too close to Putin

On Sept. 8, Trump repeated a long-held view that Putin "has been a leader far more than our president has been." And just a month later tried to deflect attention away from his own connections to Russia by tweeting: "Clinton's Close Ties To Putin Deserve Scrutiny."

But, by the end of the year, Trump tweeted of Putin, "I always knew he was very smart!"

Another of Trump's recurring tropes is that only stupid people want a "bad" relationship with Russia.

On Jan. 7, he said, "Having a good relationship with Russia is a good thing, not a bad thing. Only 'stupid' people, or fools, would think that it is bad, We have enough problems around the world without yet another one."

Trump, Russia, and the truth

Even if we still don't know the extent of Trump's relationships and business connections in Russia, his recent statements on Russia do shed light on his relationship with the truth.