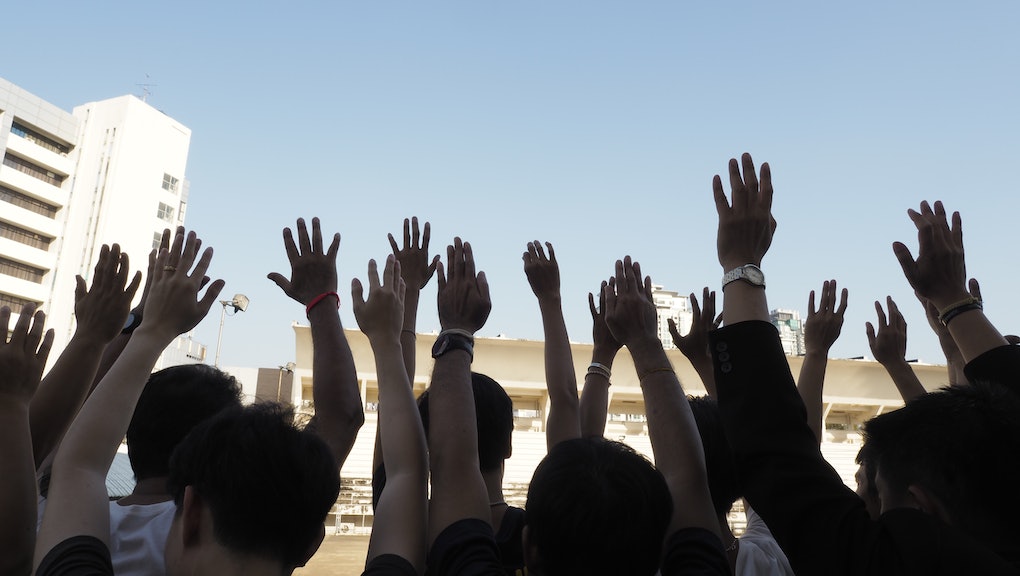 Can you get fired for your political views? Know your rights.

Most millennials "somewhat" identify as activists, according to the Huffington Post. They may not all be waving signs at marches, but they are expressing their political views through a broad range of actions — from only buying clothes that are "Made in the U.S.A." to investing in companies that align with their social values, as the Washington Post reports.

Standing up for your beliefs is important. But you need to be smart about how you express yourself at work because your boss could fire you for certain kinds of political activity.

Here's how to keep your activism from affecting your job — and the rights you should know about.

These forms of activism are protected by the law

Federal laws protect your right to engage in union organization efforts, speak up about working conditions and report discrimination.

Your right to unionize and have private discussions about work conditions is protected by the National Labor Relations Act (NLRB), which has even extended so far as to protect employees who complained to each other about working conditions on Facebook.

If you report unsafe work conditions or violations of wage  laws (like not getting paid), you are also safe from retaliatory action because of the whistleblower protections and anti-retaliation provisions in the Occupational Safety and Health Act and the Fair Labor Standards Act.

Meanwhile, Title VII of the Civil Rights Act and the Americans with Disabilities Act protect U.S. citizens from harassment or discrimination based on race, color, religion, sex, national origin, age (if you're over 40), and physical or mental handicap, all of which are considered "protected classes."

Your employer can't fire you for speaking up about hostile work conditions that result from being in a protected class.

Here's what can get you fired

Your employer is free to fire you for any form of activism not specifically protected by law — from wearing a "Make America Great Again" cap to skipping work on "A Day Without a Woman" without your employer's consent.

Wait, but what about the First Amendment; doesn't that protect you? Not likely. The First Amendment limits the government's ability to suppress speech, not your employer's. What's more, only a few states — including California, Colorado, New York, North Dakota and Louisiana — specifically prohibit employers from firing a worker for lawful off-duty activities like political participation.

"The broadest-based laws, such as those in California and New York, make it illegal to discriminate on the basis of an employee's political activity or beliefs in or out of work ... unless such activity interferes with the functioning of the business," Paula Brantner, executive director of Workplace Fairness, explained to the New York Times.

Government workers can be fired for breaking rules that explicitly limit their ability to participate in political campaigns. However, they actually have more protections for discrimination based on political beliefs.

What you say on social media matters

Taking part in off-duty activism can get you publicity. You could be interviewed when attending a protest or a tweet or video could go viral. It could also increase your chance of losing your job. There are numerous examples of people being fired because of tweets or videos of them that went viral.

Here's the problem: If you identify where you work in your online profiles, your employer could be inundated with angry calls or emails and may just fire you to solve the problem. If you're going to be political online, consider using a pseudonym or at least not listing your employer on your profile.

You need to know not only the law but also your company's rules. If you have an at-will employment arrangement, they can legally fire you for any reason at all  — or no reason — as long as it's not discriminatory or because you unionized or spoke up about workplace conditions.

If you have an employment contract that says you can only be fired for cause, your employer may be in violation of this contract if they fire you for politics — unless your behavior was prohibited by your contract.

Be smart about your activism

None of this means you shouldn't be politically active. Just be smart about how you do it. If you aren't protected for expressing your beliefs, stay quiet about politics at work. Most offices aren't the place for political debate anyway.

If you're going to take time off to attend rallies or events, comply with the rules for vacation or personal days. You don't have to specifically tell your employer you're taking off to Rise With Standing Rock Native Nations or participate in a Tax March. Just put in your request for time off in accordance with the rules and be an activist during your off time.