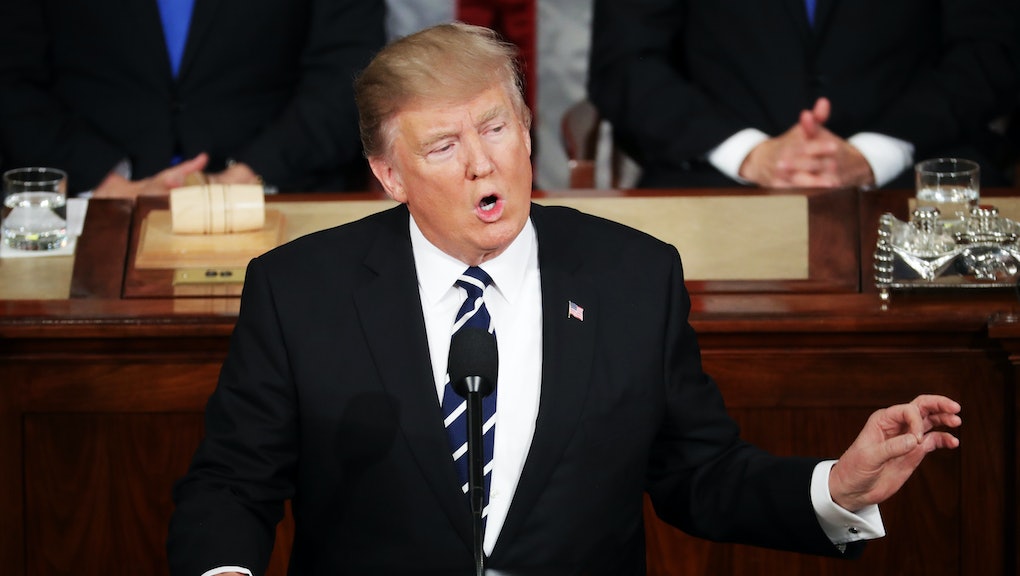 President Donald Trump struck an optimistic tone in his first joint address to Congress Tuesday night, delivering what he called "a message of unity and strength" and calling for bipartisan action to help usher in a "new chapter of American greatness."

His speech was unusually restrained for Trump, who barely veered away from his prepared remarks. He struck a more positive tone than his inaugural address — the "American carnage" speech — which painted a dour picture of national decay.

Trump called on Congress to work together in a bipartisan fashion to help deliver on the laundry list of promises he made on the campaign trail, including cracking down on illegal immigration, renegotiating trade deals, repealing and replacing the Affordable Care Act, reforming the tax code and defeating ISIS.

"Everything that is broken in our country can be fixed," Trump said. "Every problem can be solved. And every hurting family can find healing and hope. Our citizens deserve this, and so much more — so why not join forces to finally get it done?"

Before launching into his speech, Trump began by strongly condemning the rise in anti-Semitic and anti-Muslim incidents across the country — including the bomb threats at Jewish Community Centers — as well as the shooting of two Indian men in Kansas City that's being investigated as a hate crime.

"Tonight, as we mark the conclusion of our celebration of Black History Month, we are reminded of our nation's path toward civil rights and the work that still remains," Trump said at the outset of his speech. "Recent threats targeting Jewish community centers and vandalism of Jewish cemeteries, as well as last week's shooting in Kansas City, remind us that while we may be a nation divided on policies, we are a country that stands united in condemning hate and evil in all its forms."

The most contentious moment of the night came when Trump announced an office to serve those whose loved ones were killed by immigrants.

Called the "Victims of Immigration Crime Engagement" — or "VOICE" — Trump said the office would provide "a voice to those who have been ignored by our media and silenced by special interests."

The line elicited groans from Democrats in the audience.

There was no Democratic response to Trump along the lines of what Republicans did when President Barack Obama was in office — including the Republican member who yelled "you lie" at Obama during a health care speech in his first year in office. Democrats in the audience were measured, choosing merely to sit silently and not clap as Trump delivered his address.

But the Democrats did use other tactics to show their disapproval of Trump.

A number of Democratic members of Congress brought guests with them who are adversely impacted by Trump's travel ban and immigration policies.

Women in the Democratic caucus wore "suffragette white" to show their support for women's rights.

And Rep. Eliot Engel, who for decades would camp out on the aisle where the president walks in to grab a handshake, decided against that tradition this year, instead choosing to sit in the middle of the pack.

"I will listen to what he has to say today, but I will not greet him and shake his hand," Engel said in a speech Tuesday on the House floor.