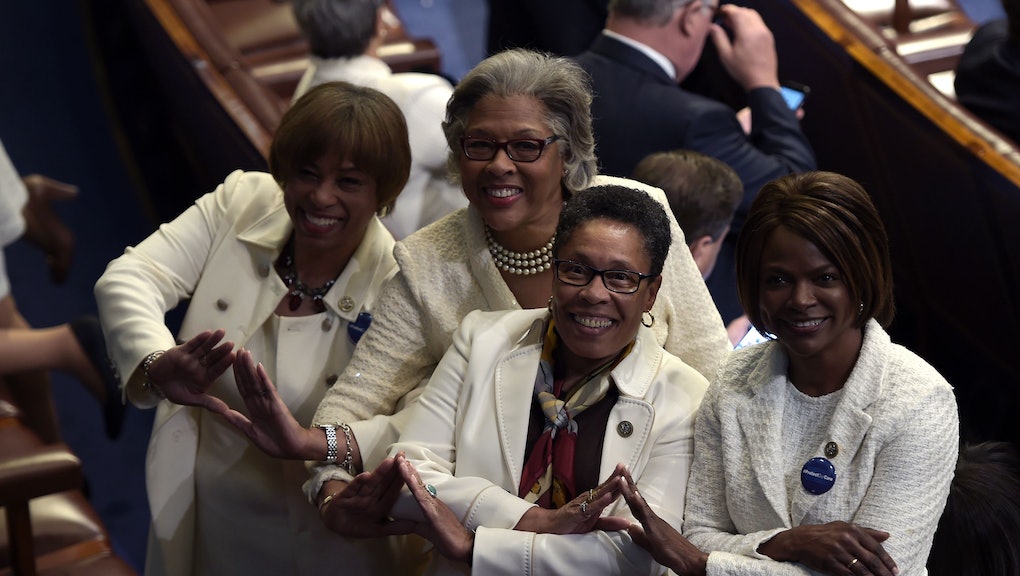 Anyone watching Trump's joint address to congress this evening may have noticed a sea of white pantsuits being worn by the Democratic women present, like House Minority Leader Nancy Pelosi (D-Calif.), Rep. Barbara Lee (D-Calif.) and Katherine Clark (D-Mass.).

This sartorial unanimity was no coincidence. The small, but noticeable gesture — used by Hillary Clinton throughout her campaign — was in support of women's rights, specifically in homage to the suffragettes of the late-19th and early-20th centuries.

The intent behind it was further confirmed by Rep. Marcy Kaptur (D-Ohio), who tweeted: "See the people wearing white? Those are House Democratic women proudly honoring the suffrage movement."

And seen they were:

The color white holds deep historical meaning for the suffragettes, who donned white to symbolize femininity, purity and high morals.

"They sought to effect change not by challenging contemporary fashion and ideals of femininity, but by conforming to them," the Guardian reported on suffragette fashion.

Women in politics have a history of wearing white that dates back before Clinton. In 1984, when Geraldine Ferraro made history as the first woman to ever accept the vice presidential nomination for a major party, she also wore white.

Tonight's symbol of unity among female democratic leaders — and the ensuing hashtag #WomenWearWhite — was both an homage to how far women have come and a strong symbol of solidarity toward a future with greater gender equality.