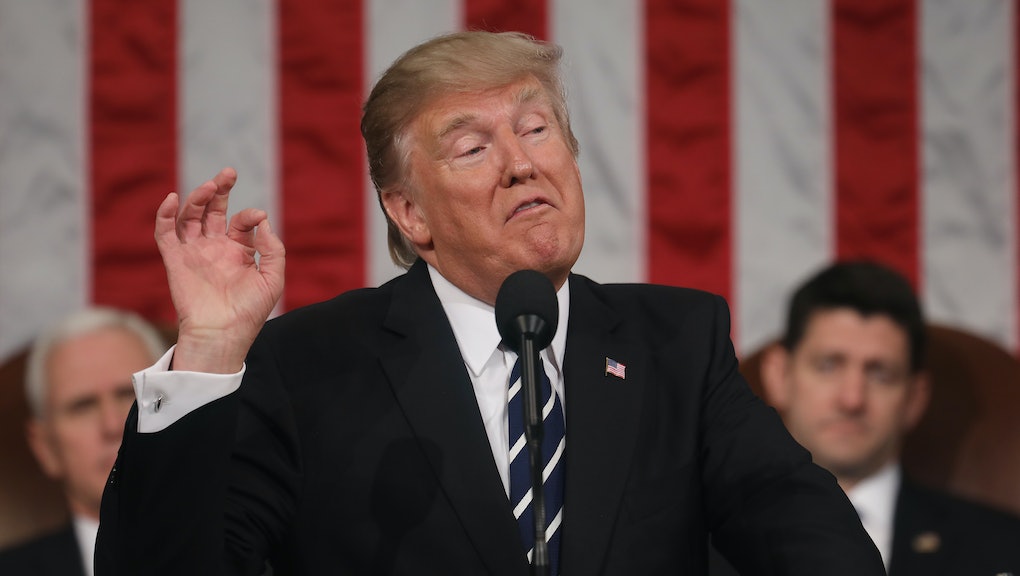 President Donald Trump's address before a joint session of Congress Tuesday night was more notable for what was not talked about, rather than what he did say.

Gone was Trump's usual rhetoric spouting conspiracy theories, bragging about his election win and attacking the media. Instead, Trump was measured, delivering a lofty speech filled with promises — but few specifics on how to achieve them.

Here are five things you usually get in Trump's public remarks that were missing on Tuesday night.

Trump made no mention of his vanquished foe Hillary Clinton — a favorite Trump topic, despite the fact that he defeated her way back in November. He really, really likes talking about Clinton, so it was especially surprising she didn't come up.

During a wild and rambling speech at the Conservative Political Action Conference in Washington, D.C. on Friday, Trump went on about his win in November's election. He had done the same thing the week before in a bizarre press conference — where he even got the facts of his win wrong. The election win has been a consistent theme of the president's public remarks. And yet during his biggest speech yet, Trump didn't bring up his election win at all.

3. Mexico paying for the border wall

Trump spent the whole campaign insisting Mexico would pay for the very expensive border wall he wants to build between the U.S. and its southern neighbor. But, as the Washington Post's Glenn Kessler pointed out on Twitter, Trump has more or less dropped that talking point. Shortly after Trump assumed the Oval Office, Mexican President Enrique Peña Nieto said Mexico would not be paying for the wall. Trump suggested that a tax on Mexican imports would pay for it, but that just means U.S. consumers would shoulder the burden. And that's been about it.

Though Trump mentioned his "great, great wall" on Tuesday night, there was no talk — none — about who, exactly, would pay for it.

Throughout his campaign and again in his inaugural address, Trump harped on the theme of "America first," a message with dark historical undertones. That kind of language, too — the most fiery of Trump's nationalistic cris de cœur — was absent on Tuesday night.

Then there were the attacks on what he calls "dishonest media" — or lack thereof. Trump loves lashing out at the media, calling all the news he doesn't like "fake news." But there was only one, glancing shot against the media this time: Trump referred to a new program intended to track supposed crimes by immigrants as a way to tell the story that has "been ignored by our media" — which is hardly the sort of rhetoric against the media that has troubled even the likes of George W. Bush.