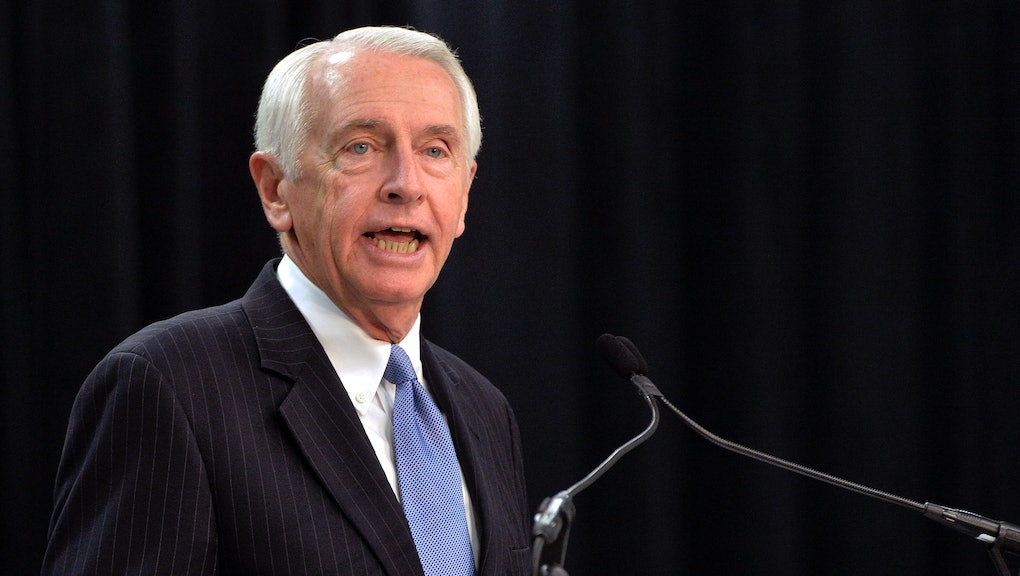 Democrats could have picked anyone to respond to Trump's speech. They picked this guy.

President Donald Trump's first address to a joint session of Congress was also the Democrats' first big opportunity to show America that they are ready to lead the growing resistance movement against his agenda.

"I'm a proud Democrat, but first and foremost, I'm a proud Republican and Democrat and mostly American," Beshear puzzlingly said at the beginning of a speech he delivered seated in a Kentucky bar, surrounded by locals.

How did this end up happening?

John Neffinger, the communications director for the Democratic National Committee, said only that the choice had been made by top congressional Democrats, Sen. Chuck Schumer (D-N.Y.) and Rep. Nancy Pelosi (D-Calif.).

"That was Schumer and Pelosi's decision," he said in an email, "not sure at this hour how it was made."

Schumer and Pelosi did not respond to requests for comment.

Democratic leadership may have thought Beshear would make a good choice because of the considerable success that the Affordable Care Act had in Kentucky during his tenure. Under Beshear, Kentucky saw a larger drop in the percentage of uninsured people than any other state in the country, due in large part to the fact that Beshear was one of very few red state governors that expanded Medicaid and set up a state-run healthcare exchange under the law.

But there was a lot more of Trump's speech to respond to than just the Republican Party's effort to repeal the Affordable Care Act — something Democrats surely could have predicted.

Beshear mentioned the President's immigration plan only once, and even then appeared to be out of step with the rest of his party.

"The president can and should enforce our immigration laws," Beshear said, seemingly unaware that a large part of Trump's deportation agenda involves ramping up enforcement of laws that are already on the books.

The former Kentucky governor also offered a personal narrative about his early life and time in office that was littered with centrist bromides about hard work, fiscal responsibility and compromise.

"I listened," he said. "And I built partnerships with business leaders and with Republicans in our legislature."

Since the election, grassroots activists have called on Democrats to oppose Trump's agenda, full stop, a message that hardly lends itself Beshear's lessons about bipartisanship, to say nothing of celebrating business leaders.

Beyond being ideologically out of step with the Democrats' grass roots, Beshear also represents an odd choice for a party looking to build new leadership within it's ranks.

Over the weekend the Democratic National Committee held it's annual winter meeting in Atlanta, where they chose former Labor Secretary Tom Perez to become the new chair of the DNC. Throughout the conference, DNC leaders emphasized the need to grow the Democratic "bench" and elevate newer younger candidates to more prominent roles in the party.

Throughout the Obama administration Republicans used their responses to the president's State of the Union or joint session speech to do just that. Future presidential contenders and party leaders like Paul Ryan, Marco Rubio and Bobby Jindal each cut their teeth in front of a national audience by responding the the president's primetime address.

Instead of emulating that strategy, Democrats chose a retired governor and self-described "private citizen" to deliver their response.

"You know, another Republican president, Ronald Reagan, once said, 'In America, our origins matter less than our destination, and that is what democracy is all about,'" Beshear said toward the end of his speech.

Whatever its origin, Beshear speech was supposed to arrive at a place where Democrats felt inspired by the effort to rebut a Republican. Instead, its final destination was a Reagan quote.

Taylor Wofford contributed to this report.