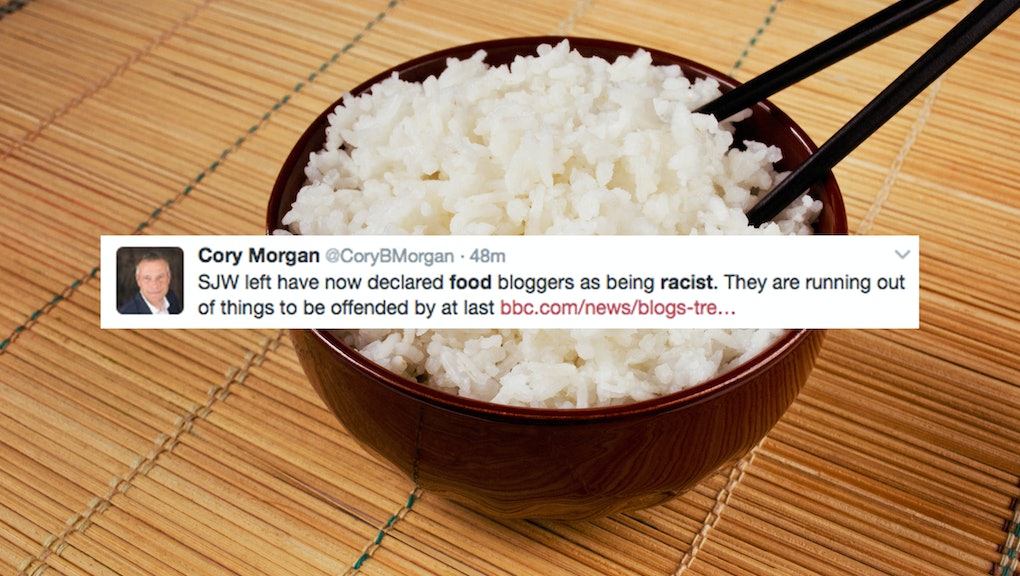 Your food Instagram posts may be perpetuating racist stereotypes

But lifestyle photos of ethnic food have the potential to be a little bit racist.

Food and travel photographer Celeste Noche discussed how photographers make food seem more exotic when she was a guest on Racist Sandwich, a podcast that investigates the politics of food. The episode with Noche aired in November 2016.

The latent racism in some food photography

When photographers or food stylists use props to style ethnic food without doing their research, they might portray a cuisine incorrectly, Noche said in an email to Mic.

Case in point: Noche said that Chef Andrew Zimmern's recipe for Filipino short ribs on his website shows unnecessary chopsticks in the photo. (Noche is Filipino-American, so she's familiar with Filipino cuisine.)

"At first glance, this seems okay, except Filipinos traditionally eat with spoons and forks or just their hands. So it feels like he's incorrectly generalizing all Asians," Noche said.

"Another example is when chopsticks are styled vertically or sticking out of a bowl, which can be seen as rude and symbolic of death in different Asian cultures," Noche said. "In both of these examples, photographers and stylists are making uneducated decisions, which perpetuate cultural misrepresentation."

Resting chopsticks vertically in rice is not polite in Chinese culture, CNN noted. Displayed in that manner, the chopsticks look like incense sticks burned to honor someone's death.

"If you're going to photograph a bowl of ramen or a bowl of pho, sometimes the background around it is exotified," Racist Sandwich cohost Zahir Janmohamed said in the Racist Sandwich podcast. An Indian curry might have a toy rickshaw next to it or some bindi in it, he noted.

In contrast, dishes from white cultures often have the "privilege" of not having to explain where they come from, Janmohamed said. For example, pasta, he said, can usually just stand on its own in a photo.

Noche isn't against using props — she thinks they can help provide context and life to food photography. But she hopes photographers and stylists can be mindful when using them, "especially when it comes to representing ethnic food," she said.

Incorrect and offensive food styling is part of the larger issue of misrepresentation in food media, Noche said. She believes that when editors, stylists or bloggers change the defining characteristics of a dish, they "perpetuate cultural erasure."

For example, a healthy blogger's "banana sushi," Bon Appetit's Halo-Halo and Bosh's pasta paella all claim to reimagine dishes from specific cuisines when in fact, they're drastically changing them.

Noche said that the trend is exemplified by the amount of white New York Times recipe writers who are authoring "ethnic" recipes, a pattern revealed in a recent analysis by the blog Intersectional Analyst. In several "ethnic" food categories, over 80% of New York Times recipes are created by white authors, the blog noted.

One way to have better and more accurate representation in food? Noche said "listening to and hiring people of color to represent their own cultures is a way we can move forward."

When the BBC interviewed Noche and published an article about racism in food media Friday, the internet slammed the story immediately.

People also began tweeting at Noche, saying she was being unnecessarily divisive.

When asked about the Twitter backlash to the BBC article, Noche said in an email that she wasn't surprised.

"People of color and other marginalized groups are constantly gaslit for challenging the status quo." —Celeste Noche

"People of color and other marginalized groups are constantly gaslit for challenging the status quo," Noche said. Noche is referencing the strategy of gaslighting, when a person or group causes another person or group to question their sanity through psychological manipulation.

The backlash "speaks to a lack of mainstream understanding about microaggressions," Racist Sandwich co-host Soleil Ho said in an email.

"Microaggressions are both the hardest and the easiest oppressive acts to pick apart and critique, because they are so subtle, ambiguous and passive," Ho said. It's a form of "passive aggressive oppression," she said, explaining the microaggressions in food media are "symptoms of the greater sickness of social inequality."

People who claim Noche is saying that white people can't eat ethnic food? That's an absurd "strawman argument," Ho said. "We're just asking for more thoughtfulness and respect towards the people who make the things you enjoy. Is that so offensive?"