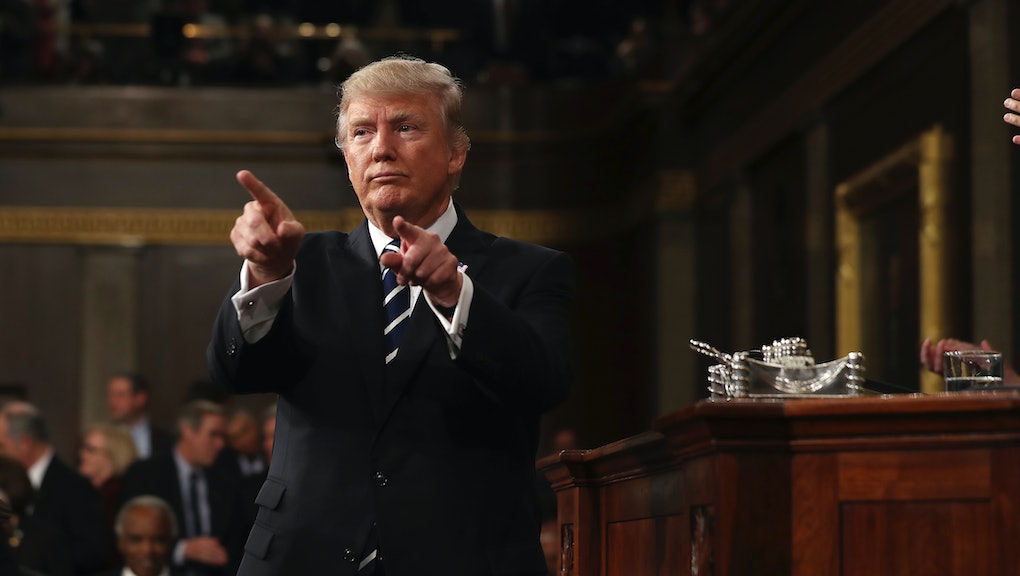 Donald Trump's presidential address tugged at your heartstrings. But will we see it again?

Presidents don't typically treat a speech to a joint session of Congress like a campaign stop, and on Tuesday night, President Donald Trump was no different. The soaring oratory employed by the U.S. leader was in line with generations of presidents who delivered speeches to the nation from the Capitol. Since Lyndon B. Johnson moved the State of the Union to the evening in 1965 to attract a larger television audience, the speech has produced many of the most memorable moments in presidential history. In recent years, Bill Clinton used his address in 1996 to move his party to the center and George W. Bush declared a new "axis of evil" in 2002 before the Iraq War.

Given how many political fights Trump has already announced he will pursue simultaneously, his speech will not be remembered for a focus on policy. Instead, the most memorable moment will be the thunderous applause Trump created when he honored the widow of the Navy SEAL who died in a raid in Yemen earlier this year. The expression on Carryn Owens' face was heartbreaking, as she stared at the ceiling while the crowd cheered and clapped to honor her late husband. For a president criticized for his gruff approach, triggering such an emotional, human response was an important moment for Trump.

Yet Trump's attempt to broaden his message was unmistakable. He asked Democrats to work with him to create more manufacturing jobs in the U.S. and making paid family leave a reality. The president promised to repeal and replace the Affordable Care Act, but he made his case differently than before, describing the importance of helping millions of Americans struggling with high insurance premiums and offering some details on his approach. It's still unclear whether ideas like selling insurance across state lines and establishing health savings accounts will lower costs, but Trump's tugging on viewers' heartstrings was a notably different style for the president.

Remember this: Hours before Trump's speech, the president made waves by apparently suggesting threats against Jewish community centers are a false flag operation — an incredible comment that feeds off right-wing theories that Democrats are calling in bomb threats for political gain. Trump also made an off-the-cuff remark that suggested he is open to amnesty for undocumented immigrants, which would be a major pivot from the campaign trail.

Earlier on Tuesday, Trump was his old self. So the morning after the speech, everyone is asking the same question: Is this a new, presidential Trump? Or will the old bombastic leader reemerge soon on Twitter? Rave reviews from viewers at home may show Trump there is something to be gained from this approach. All eyes will be on Trump's next public appearance to see if the Trump of Tuesday night becomes a mainstay in American politics.

The Mic coverage of the speech you should read:

The big recap: "A restrained Donald Trump sticks to the script in his first big address before Congress."

The key takeaways: Trump's tone was extraordinarily different, yet a lack of detail still gave his critics major openings.

To the point about tone, the things Trump did not talk about made his speech notable. There were no mentions of "fake news," his November win or a promise to make Mexico pay for his proposed border wall.

Trump still said things that were untrue throughout his speech. Mic kept a running list of the times the president stretched or created the truth.

A roundup of reactions to Trump's speech from both sides of the aisle.

This is Mic's daily read on Donald TrumpDonald Trump's America — and how it affects you. Welcome to the political newsletter that is like, "Wait, it's already March?!" We had an exclusive with Maxine Waters last night. Check it out. We're keeping it brief today, but there's lots of analysis for your enjoyment in the links below.

"Trumpian" may mean something new

•  More: There were various responses to the speech, including a Mic exclusive with Rep. Maxine Waters immediately after the address.

•  Even more: The White House was so happy with the reviews, it pushed back the signing of the new immigration executive order.

•  Yes, more: Rep. Ryan Zinke has been confirmed as secretary of the interior.

•  Trump's agenda today: Not signing that executive order on immigration. Lunch with leaders of the House and Senate. Dinner with the secretary of state.

How the Left responded

There was the official Democratic response, then the Bernie Sanders response.

Former Kentucky Gov. Steve Beshear offered a rebuke to Trump from a diner in Lexington, Kentucky, a stark contrast to the scene on Capitol Hill. Beshear homed in on the issue Democrats believe can win for them: health care. The Kentuckian stressed the importance and success of expanding Medicaid in Kentucky and setting up an ACA exchange in the state. "You promised to be a champion for families struggling to make ends meet," Beshear said of Trump, before criticizing Trump's Cabinet appointments and rolling back regulations. "Does the Affordable Care Act need some repairs? Sure it does. But so far, every Republican idea to replace the Affordable Care Act would reduce the number of Americans covered — despite your promises to the contrary."

Meanwhile, independent Vermont Sen. Bernie Sanders was live on Facebook after the speech. Sanders kicked off by highlighting the fact that Trump did not talk about entitlements, income inequality, climate change or voter suppression. His response was notably more aggressive than Beshear's and sounded more like a campaign speech than a policy critique. Sanders closed with another call for a "political revolution" to change the direction of the U.S.

There's nothing unusual about Sanders taking his message directly to his supporters; he does so frequently. But in the wake of Rep. Keith Ellison's defeat in his bid to run the DNC, Sanders' message felt designed to keep progressives engaged in the future of the party.

I spoke with Rep. Maxine Waters, the California Democrat who refused to attend Trump's address, in her office moments after Trump finished speaking. Watch her reaction here. Movement for Black Lives activists spoke with Mic for a panel discussion following Trump's speech to offer their reactions. Watch that here.

There will be no new executive order on immigration out of the White House on Wednesday. That was the word following Trump's address as officials realized the president had hit a rare home run for his oratory. Trump will also reportedly drop Iraq from the list of seven countries targeted by the ban. The new order is expected to be more narrow and explicitly allow people with visas and green cards from Iran, Libya, Somalia, Sudan, Syria and Yemen to enter the U.S. The order will also not affect people already in the air when it is signed, targeting new immigration or travel to America from those countries.

The Russia story continues to develop

Remember that dossier that detailed some very disturbing things about alleged — but unverified — Trump activities in Russia? It turns out the FBI viewed the sourcing as credible enough to justify paying the man who created the dossier to continue digging. That deal fell through as the dossier's existence became more widely known, eventually being published by BuzzFeed following the election.

House Republicans blocked a Democratic effort on Tuesday to force the Justice Department to release information on the investigation into alleged ties between Trump's campaign and Russia. Every GOP member of the House Judiciary Committee voted against the measure. The Judiciary Committee is overseeing one of five congressional inquiries into Russian actions related to the 2016 election. Arguing their colleagues are playing politics, Democrats have little faith Republicans will surface the truth.

•  Something you may have missed yesterday: The President signed a bill that repeals an Obama-era law that bans sales of guns to people who are mentally ill. (Mic)

•  Van Jones on CNN: Trump "became president of the United States" when he honored the wife of the late Navy SEAL. (CNN)

•  An opposing view: Glenn Greenwald of the Intercept wrote that honoring only the American soldier ignores the far larger number of civilians that were killed in the Yemen raid and others like it. (Intercept)

•  The inside baseball of how the president's address came together. It was not finalized until 6:15 p.m. (Politico)

•  A key GOP vote in the Senate, Lindsey Graham said Tuesday that Trump's budget would be "dead on arrival." (The Hill)

•  Watch this space: Senate Majority Leader Mitch McConnell is trying to get senators in line on how to move forward on repealing and replacing the Affordable Care Act. The Wednesday assembling of the Republican caucus will surely draw headlines. (Politico)