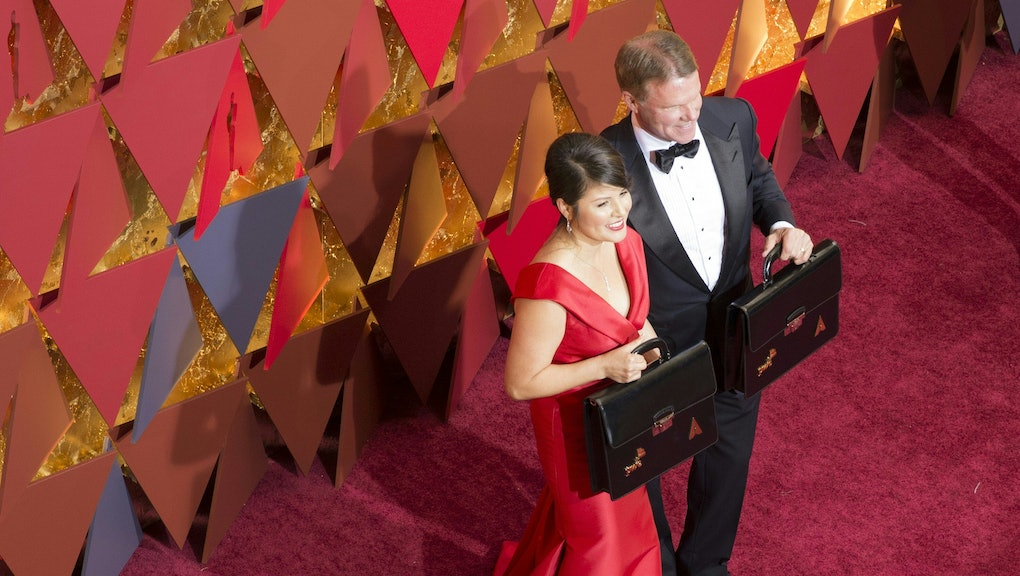 Who is Brian Cullinan? A look at the guy behind the biggest blunder in Oscars history

Following the epic mistake at the 89th Academy Awards that named La La Land as the year's best picture rather than the actual winner, Moonlight, one man has been held responsible: Brian Cullinan — although President Donald Trump is now taking at least partial credit for the mistake.

Presenters Warren Beatty and Faye Dunaway announced the wrong winner, marking the first time the incorrect film had been named best picture in the history of the academy. The error was not acknowledged until the producers of the movie-musical had gathered onstage to give their acceptance speeches.

Though Beatty initially took the brunt of the blame, the error was later credited to Cullinan for giving Beatty and Dunaway the wrong envelope. Instead of the winner of best picture, the envelope contained a duplicate of the winner of best actress, La La Land star Emma Stone. Cullinan is a 57-year-old partner at PricewaterhouseCoopers, the accounting firm that counts and delivers the winning Oscars envelopes.

PwC has publicly taken the blame for the mistake and confirmed that Cullinan mistakenly handed the presenters the duplicate best actress envelope instead of the best picture envelope. Cullinan and Martha Ruiz stand on opposite sides of the stage and hand presenters their cards. Their job isn't taken lightly: The day of the ceremony, they travel to the theater with police escorts, carrying matching briefcases that contain the 24 envelopes of winners. The separate transportation ensures that one set of the envelopes arrives safely.

Life off the red carpet

The 89th ceremony was Cullinan's fourth year overseeing the Oscar balloting process. The lead partner for the Academy of Motion Picture Arts and Sciences, Cullinan is married with grown children and is a New England Patriots fan who rides a Harley motorcycle.

Until Sunday, Cullinan had been active on social media, sharing photos of himself with numerous A-list celebrities. But he had been asked to not tweet during the ceremony — a request he did not honor, given that, moments before he gave Beatty the wrong envelope, he tweeted a photo of Emma Stone backstage immediately after accepting her award. The tweet has since been deleted, and many have suggested he was star-struck and distracted by social media, which led to the error.

It's an error that Cullinan himself said in an interview with the Huffington Post was "so unlikely," saying if an error took place:

We would make sure that the correct person was known very quickly. Whether that entails stopping the show, us walking onstage, us signaling to the stage manager — that's really a game-time decision, if something like that were to happen. Again, it's so unlikely.

Cullinan and Ruiz have remained silent since Sunday night's mix-up. A statement released by the academy said in part:

PwC has taken full responsibility for the breaches of established protocols that took place during the ceremony. We have spent last night and today investigating the circumstances, and will determine what actions are appropriate going forward. We are unwaveringly committed to upholding the integrity of the Oscars and the Academy of Motion Picture Arts and Sciences.

PwC blamed Cullinan and Ruiz in a statement for not correcting the error "quickly enough."

But the firm has not made any remarks about Cullinan's future with the company, and the future of the 83-year relationship between PwC and the academy remains uncertain.