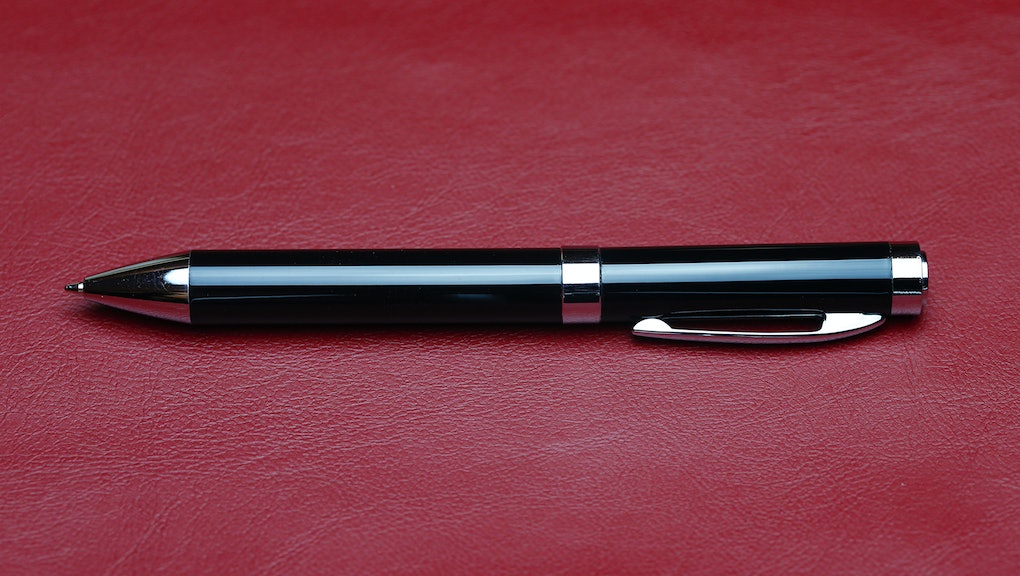 At last, a vape pen that is actually a writing instrument (and duh, a vaporizer)

Vaporizers continue to shrink. Just look at the Grasshopper vaporizer, the O.penVAPE Kit or Snoop Dogg's G Slim Vaporizer, and it's easy to see that slim is in when it comes to vape design.

The new VaePlume adheres to this slender-figured precedent — but with a unique twist: It's an actual fine writing instrument, complete with a smooth-rolling ball point.

This is good for two reasons:

First: A cannabis inhaler hit with sudden inspiration, needing to make sure she or he won't forget said genius, now has an apparatus in hand to take down diligent notes.

Second: Discretion. With the White House recently hinting at a crackdown on recreational marijuana, having a discreet device may not be just important — it may be what keeps you out of getting interrogated by law enforcement.

How did the design come about?

"I was inspired by a concealed pipe I had a long time ago that was hidden in a magic marker – actually a Sharpie," VaePlume creator Jake Plume said. "It didn't work as a marker but it was discreet and low-key and very convenient. Like a lot of people, I was following the growth of vaping. I saw some Indiegogo campaigns for vaping devices that looked cool, but in my experience as an engineer they didn't look like they were ultimately technologically feasible. I started thinking that with vaping technology I could revisit my marker pen pipe memory and design something better that was discreet and also functioned as what it appeared to be – a pen."

Thankfully, using his expertise in sourcing, he was able to find a manufacturer with just the right sized 280 milliamp hour batteries, and thus, the one design snafu was solved.

To use VaePlume, simply install an oil cartridge of your choice and draw upon the stainless mouthpiece hidden in the "cap" of the pen. With its integrated pressure sensor, there are no buttons to push. Even better: With the powerful lithium ion battery there is no warm up time and no flashy lights to announce its use.

How much does it cost?

The standard VaePlume is available online here for $79.99.

To learn more, check out the video below: