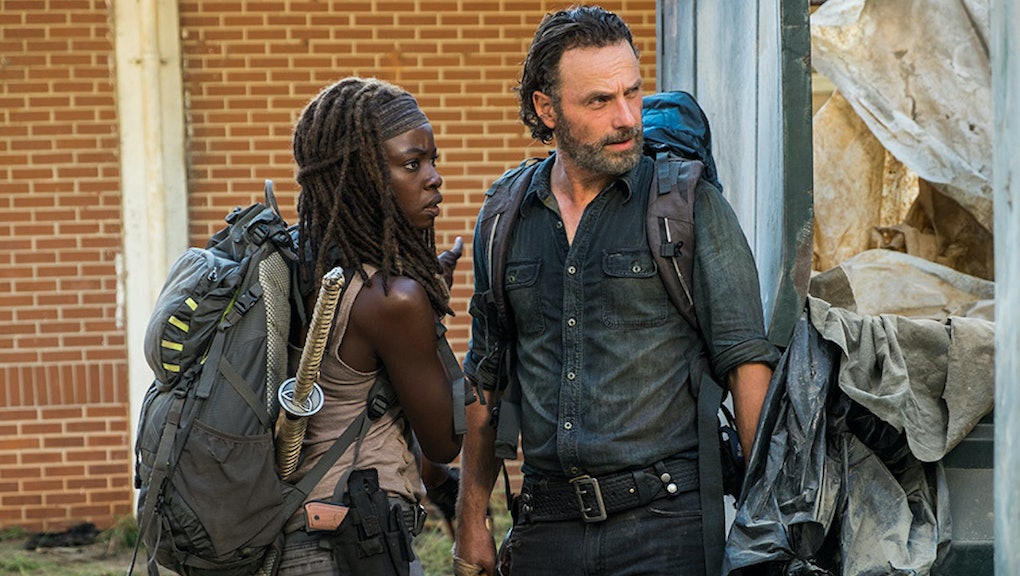 The Walking Dead is no stranger to filler episodes, which typically take place in the middle of the show's half-seasons as they bide time for, well, something interesting to happen. Think of the second half of season four, when the main characters were separated and, in the spirit of the series' title, did a whole lot of walking.

But the 12th episode of season seven, "Say Yes," may very well be the pinnacle of The Walking Dead's filler episodes. The plot can easily be summarized in two sentences — that's not a compliment! — and is an unfortunate reminder that the series is still susceptible to its most frustrating tendencies, even after a string of promising episodes at the start of season 7B.

In "Say Yes," Rick and Michonne are outside Alexandria gathering supplies for their new junkyard allies, who have agreed to help Alexandria fight the Saviors if they're provided an ample cache of weapons. It's a tough ordeal, to be sure, but Michonne prefers this over cruel subjugation at the hands of Negan. "We're fighting the fight," she tells Rick. "It's better."

They eventually make their way to a carnival filled with the undead, many of which are soldiers who have weapons slung on their shoulders (there's also a zombie chilling inside a small ticket booth, which is enjoyable). At the same time, they find a plethora of ready-to-eat meals to bring back to Alexandria, which has a glaringly low food supply.

Back in Alexandria, Tara struggles with the idea of breaking her promise with Cindy from Oceanside, who saved her life in exchange for silence on the whereabouts of their community. But, as fans should recall, they had a huge arsenal of weapons that would appease the junkyard group. Tara grapples with this moral dilemma by talking about it out loud while babysitting Judith, as one does. Meanwhile, Rosita tries her own luck with a scavenging mission for guns, but comes up empty — only finding a toy gun at the entrance of a house.

Alexandria takes a back seat, however, to the rousing carnival adventure for Rick and Michonne. There's really no stakes for either character, whose plot armor should forever be impenetrable, while they fight off hordes of zombies to grab all the weapons. It's hard to get invested in anything that happens to them, knowing full well they'll both survive. So when "Say Yes" gives the audience a brief fake-out of Michonne assuming Rick was just ambushed by walkers — when in reality, it was a poorly rendered CGI deer being eaten — no one with a shred of common sense will bat an eye.

However, when Alexandria presents these weapons to Jadis and the Scavengers (63, to be exact), she lets them know it's not going to be enough. "Need nearly twice," she says curtly. Side note: Just how long has the apocalypse been going on for? It shouldn't be nearly enough time for certain communities to speak in incoherent Neanderthal-like phrases. Regardless, it means that Rick and co. will have to go back out and find more guns for the Scavengers. Or not, since Tara approaches Rick because she has something to share with him, which is almost certainly the existence of Oceanside and their many weapons.

So, to recap, the entire episode skirts around Tara giving up Oceanside, which is something that's been telegraphed since the community was introduced last year. This inevitability being dragged out for another episode is quite indicting for the show: The Walking Dead hasn't learned its lesson. The decline in ratings is likely the result of a few issues for the series — Negan surely among them — but it's always tested the patience of fans with pointless filler episodes. This was less of a problem when AMC could boast stellar ratings on a weekly basis, but season seven has proved that fans are willing to jump ship in droves. In other words, stagnant episodes like "Say Yes" can be very damaging to its viewership.

The one saving grace for the episode is a scheme hatched by Rosita and Sasha. Rosita — through either stealing one of the guns Rick brought to the Scavengers, or hiding hers from the rest of the group — unveils a sniper rifle to Sasha at the Hilltop. They both want to kill Negan, even if it means going into the Sanctuary for what would be a Rogue One-esque suicide mission. "One condition," Sasha tells her. "I get to take the shot." For anyone still unsure whether actress Sonequa Martin-Green can stay on The Walking Dead while simultaneously taking on the lead role in CBS' new Star Trek series, get ready to say your goodbyes.

However, that thread, like the group's discovery of Oceanside, will have to wait for another week. In the interim, Walking Dead fans are left with a disappointing episode that barely had anything new to say. We won't be the least bit surprised if another ratings dip is on the horizon.