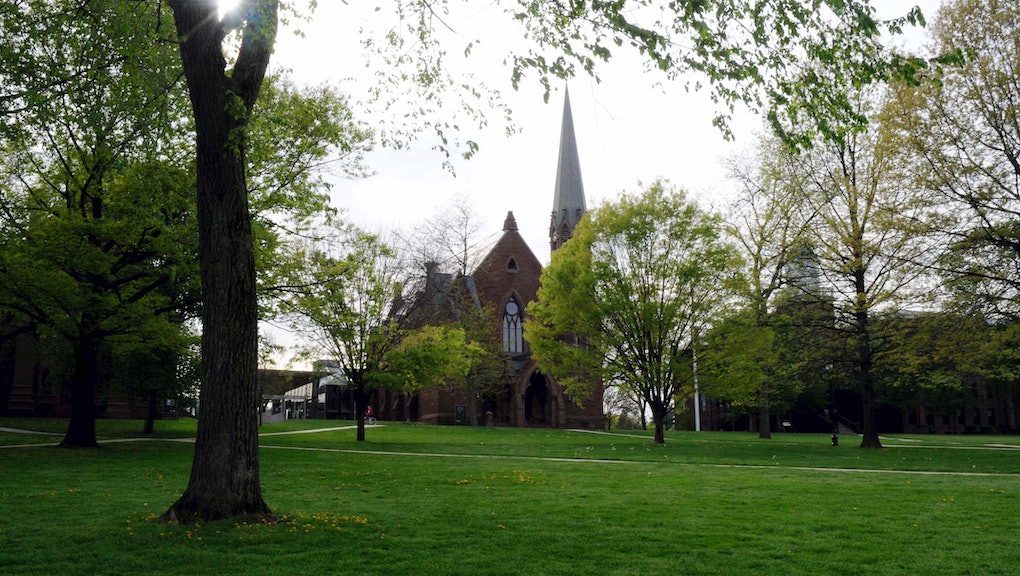 According to student blog Wesleying, many of the posters — featuring the names and photos of three Wesleyan professors have since been taken down. But on Wednesday, an anonymous student who claimed to be behind the flyers told Mic there's a pretty good chance students haven't seen the last of them.

"Each of the three professors on the posters is well understood to be terrorizing and intimidating people on campus right now," the student said. "We only put up about 15 posters. But more might get put up soon."

The student, who requested anonymity to prevent retaliation by the university, described themselves as part of a loose coalition of activists at Wesleyan who do everything from sitting on Title IX committees and staging protests to putting on masks and plastering flyers around campus under the cover of night.

"There's a group of us who has a little less to lose, who has maybe worked with bureaucracy in the past and doesn't like it anymore, who can lose some hours of sleep doing this," the student said. "We can work with institutions to some degree, but there are other things we can do to prioritize the safety of students."

In April 2016, word broke that Lauren Caldwell, associate professor of classical studies, had filed a lawsuit against the university "for allegedly ignoring her claims of sexual harassment against [one of the professors named in the poster] who was serving as her dean at the time and then punishing her for coming forward," according to Inside Higher Ed.

On one occasion, he allegedly invited Caldwell to his home and made inappropriate remarks about her appearance. Another time, Caldwell claimed he had waxed nostalgic for the 1970s version of Wesleyan, when there was "lots of group sex." Then there were insults: Caldwell reported that he called her "white trash" and said he "loved classicists with a redneck side." He also allegedly referred to himself as a "14-year-old boy with a crush on her."

The suit claimed that after Caldwell reported him to Wesleyan's Title IX coordinator, the university delayed giving her back pay following a medical leave of absence and blocked her request to change departments. Until that point, multiple university officials had been dismissive of her allegations and/or discouraged her from reporting them at all.

"The greater Wesleyan community needs to know that the administration is completely unprepared to deal with a student's reporting a professor for inappropriate behavior."

Meanwhile, Chloe Murtagh, a 2015 alumna of Wesleyan, said in a Wednesday interview it was "pretty common knowledge" that a 2012 Wesleying article accusing an unnamed professor of sexual harassment was about another of the professors featured in the poster.

The piece, entitled "Wesleyan is Great, Unless a Professor Sexually Harasses You," was written by then-senior Nico Vitti.

"Let me be clear: I'm writing and publishing this here on Wesleying because the greater Wesleyan community needs to know that the administration is completely unprepared to deal with a student's reporting a professor for inappropriate behavior," Vitti wrote.

Vitti said the professor sexually harassed him repeatedly, beginning in the spring of his freshman year. When Vitti reported the behavior, school officials assured him they would investigate but never told him the outcome of said investigation. In the meantime, Vitti said he would run into the professor on campus, prompting "trauma-related anxiety symptoms."

When Vitti requested the professor not be present for his commencement ceremony, administrative officials told him they had already sanctioned the professor and couldn't impose any additional penalties — he would, in fact, attend Vitti's graduation.

Of the three professors featured on the poster, the anonymous student's case against the last professor is the most dubious.

The anonymous student behind the flyers said campus activists put him on their radar after the professor allegedly lashed out at a student who had organized a different poster campaign, one that included statistics about the lack of women of color in STEM and broadcasted information about Caldwell's lawsuit.

"[He] came up to her and started accosting her, saying, 'You can't have these up — it's slander,'" the student said. After that, the student started talking about him with other students and even some professors who called him "despicable" and a "predator."

Murtagh said she remembered reading a post on an anonymous, now-defunct forum called the Wesleyan Anonymous Confessions Board that referred to the professor as a "fucking creep." Otherwise, Murtagh said she hadn't heard anything more than rumblings that the professor was "creepy with female students."

"It was written on a message board in a kind of knowing, joking way because people on Wesleyan's campus feel so disempowered that calling him a 'fucking creep' is all people can do," Murtagh said.

"People on Wesleyan's campus feel so disempowered that calling him a 'fucking creep' is all people can do."

Recently, students have been trying to reclaim some of the power lost to a university that they believe doesn't prioritize adjudicating sexual violence on campus.

Scott told the Wesleyan Argus they started the survey because Wesleyan's Title IX office had "proven obsolete in protecting survivors and creating a community that is safe from sexual misconduct."

Murtagh said both "Say Their Names" and Tuesday's flurry of damning flyers signal to her that students are finally realizing the university may not be able to bring justice to survivors.

Wesleyan University did not return multiple requests for comment.

March 3, 2017, 3:34 P.M.: The story has been updated to remove the names of the three professors featured in the poster. An embedded tweet featuring photos of the professors has also been removed.