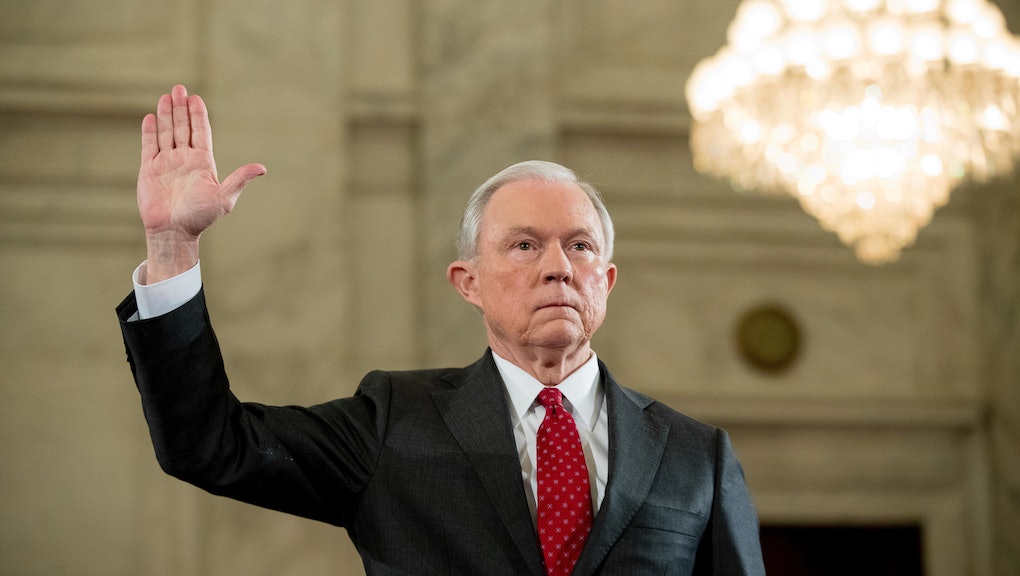 Did he or didn't he? The longer the question about Jeff Sessions' communications with Russia hangs in the air, the more pressure Republicans will face to change their tune on investigations. The then-senator met with the Russian ambassador to the United States twice in 2016, including once in the weeks before the election, according to the Washington Post. But during his confirmation hearings, the now-attorney general testified that he had no contact with Russians during the campaign. Sessions does not dispute meeting with the Russian ambassador, but contends he did not talk about the campaign. Democrats argue it does not matter.

All of this depends on your interpretation of a few words. In a written questionnaire, Sen. Patrick Leahy (D-Vt.) asked Sessions if he had been "in contact with anyone connected to any part of the Russian government about the 2016 election, either before or after Election Day?" Sessions answered no. A potentially more damaging exchange occurred during Sessions' hearing: Sen. Al Franken (D-Minn.) asked Sessions, "If there is any evidence anyone affiliated with the Trump campaign communicated with the Russian government in the course of this campaign, what will you do?" Sessions' response: "I have been called a surrogate a time or two in that campaign, and I did not have communications with the Russians." Not only did Sessions volunteer this information outside the scope of Franken's line of questioning, but his comments were also broader than what he told Leahy because they referred to more than just discussion of the campaign.

Bear with me. Sessions' office said it is normal for the senator to meet with ambassadors. But the Washington Post reported that 20 of the 26 senators on the Senate Armed Services Committee said they did not meet with the Russian ambassador in 2016. The others had not responded as of Wednesday night. Not only was Sessions seemingly the only senator on the committee to meet with the Russian ambassador, he was also the staunchest Trump supporter on Capitol Hill.

This is Mic's read on Donald Trump's America — and how it affects you. Welcome to the political newsletter that would really like to be a fly on the wall at the DOJ.

Critics say it's contradictory and suspicious. Allegations of possible perjury are running rampant — and Democrats are out for blood.

Dozens have already called for Sessions' resignation, including House Minority Leader Nancy Pelosi and Sen. Elizabeth Warren. On Thursday, Senate Minority Leader Chuck Schumer said Sessions needs to resign and reiterated his call for a special prosecutor. Many Democrats are calling for Sessions to recuse himself from the Department of Justice's investigation into Trump's alleged ties to Russia. Others are renewing calls for a special prosecutor amid the five congressional investigations related to Russia. This story hits the administration only a few weeks after Michael Flynn resigned after it was reported he lied to Vice President Mike Pence about his contacts with the Russian ambassador. (A side note: Sessions was once very critical of lying under oath. Check out the video.)

The pressure from Republicans is also building. House Majority Leader Kevin McCarthy said Thursday, "I think it'd be easier, yes" if Sessions recused himself from any investigation into Russia. Sen. Lindsey Graham said Wednesday that there should be a special prosecutor to investigate possible ties to Russia. Rep. Jason Chaffetz, the chairman of the House oversight committee, said Sessions needed to clarify his comments and recuse himself. Other prominent Republican senators like Ted Cruz and Marco Rubio have said they want Sessions to clarify his comments and clear himself of questions. Overall, the emerging consensus across the board seems to be that Sessions should clarify his comments during the confirmation process and over the past 24 hours.

If Sessions recused himself from further inquiry into Trump and Russia, the decision of whether to appoint a special prosecutor could fall to a nonpolitical official in the Department of Justice — a reality that might trouble the Trump White House.

• Did the White House know Sessions met with the Russian ambassador or did Sessions hide it, like Michael Flynn did?

• Will Republicans support Sessions and the White House or will they back off, attempting to sever themselves from the potential political fallout?

• Will this latest addition to the Russia story force House Speaker Paul Ryan or Senate Majority Leader Mitch McConnell to push for a stronger investigation into Trump?

This story is continuing to develop. Please check mic.com/navigatingtrumpsamerica for updates over the next 24 hours.

Jeff Sessions sucks all the air out of the room

• Today: Jeff Sessions is dominating the news. We break it all down.

• More: Ben Carson has been confirmed as secretary of housing and urban development.

The New York Times on Wednesday also dropped a report detailing the moves by former President Barack Obama's White House to make sure information about Russian hacking was spread across the government. To leave breadcrumbs for surfacing in later investigations, officials began asking specific questions in private briefings. Officials also kept the classification level of some information low to make sure more people around the government could see the evidence. The story also claimed American allies provided evidence that Trump associates met with Russian contacts in European cities.

Press secretary Sean Spicer's response: "There continues to be no there, there." He also said the story demonstrates that the Obama administration was working overtime to discredit Trump's election win.

As the hubbub about Sessions sucks all the air out of the room, another big story moved on Capitol Hill on Thursday. Ben Carson has been confirmed as the next secretary of housing and urban development. Trump and Republicans have praised Carson's rags-to-riches life story. But Carson, a retired neurosurgeon, does not have any formal experience in housing or mortgage policy. A candidate who was once near the top of the presidential field in polls, Carson threw his support behind Trump after he dropped out of the race in March 2016. Carson is now the only African-American member of Trump's Cabinet. According to Politico, Carson is planning a nationwide listening tour after his confirmation.

Trump's most powerful moment during his speech to Congress on Tuesday came as he recognized the death of a Navy SEAL killed in a recent raid in Yemen. That led to thunderous applause as the soldier's widow cried and was honored in the House chamber. But by a day after the speech, contradictory accounts were again emerging around the success of the raid and Trump's approach.

The White House has proposed cutting one-fifth of the jobs at the Environmental Protection Agency. (Washington Post)

• The White House has proposed cutting one-fifth of the jobs at the Environmental Protection Agency. (Washington Post)

• A lesson for Sen. Claire McCaskill: Check your calendar before you tweet. The senator said Thursday that she had been on the same committee as Sessions or 10 years and had "no call or meeting with Russian ambassador. Ever." Turns out, she tweeted about meeting with him in previous years. She later clarified she meant she has never met one-on-one with the ambassador. (Twitter)

• Trump's Department of Homeland Security has only found $20 million of the money needed to build the wall along the United States-Mexico border. (Reuters)

• Future decisions to undertake raids against ISIS could be made by generals without Trump's approval. (Daily Beast)