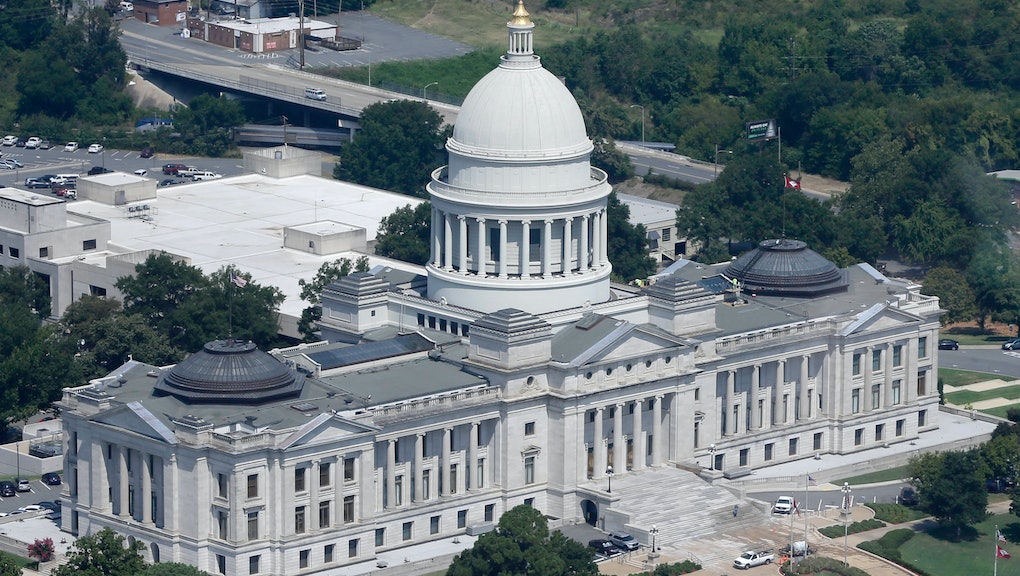 The Arkansas State Senate moved forward Tuesday with a plan that — if it works — could ban both same-sex marriage and abortion nationwide. Experts say the "far-fetched" plan is a blatant show of political theater from Arkansas lawmakers, and that it doesn't have a snowball's chance in hell of working.

That doesn't mean it isn't scary, though.

The Arkansas state legislature passed two measures on Tuesday calling for a convention of states to add amendments to the U.S. Constitution that seek to ban same-sex marriage and abortion — a sort of backdoor, last-ditch plan to change things that were made legal by the Supreme Court, the highest legal authority in the land.

After initially failing to win enough support in a previous vote, the measures were passed on Tuesday 18-9. The measures, both proposed by Republican State Senator Jason Rapert, will now go to the House.

Experts say the plan is doomed to fail

Constitutional amendments are rare — there have only been 27 of them, the most recent in 1992.

Article Five of the Constitution lays out how amendments happen: At least "two-thirds" of states would have to join Arkansas in calling for a convention for it to even get the chance to propose amendments, and there's little chance of that actually coming to pass.

"This is not going to happen," Sam Erman, a professor of law at the University of Southern California, said in a phone call Thursday. Anyone who might be concerned by this week's vote, he said, "shouldn't be alarmed that it will succeed."

Larry Tribe, a professor of constitutional law at Harvard who has argued cases before the Supreme Court, agreed, saying in an email Thursday that the Arkansas Senate's plan was "totally far-fetched," and that there was "zero chance of this convention call succeeding."

Rapert's office did not return a request for comment.

So what's behind the Arkansas state legislature's vote?

"I suspect it's mostly symbolic," Erman said, calling this path to a Constitutional amendment a "Hail Mary pass."

A constitutional convention is one of the hardest ways to enact change. When the Supreme Court makes landmark decisions — like Roe v. Wade, which effectively legalized abortion, and Obergefell v. Hodges, which effectively legalized same-sex marriage — legislators are left with two options to re-shape policy: get the court to change its mind, or change the Constitution. Arkansas is trying to accomplish the latter.

As for the former option, it's beyond the power of the state legislature to name justices to the Supreme Court. But as Erman pointed out, it may only take a few more terms of presidents appointing justices to completely sway the court's leaning, potentially away from same-sex marriage and abortion access.

Arkansas' efforts may go nowhere, but they're still alarming

Rita Sklar, executive director of the ACLU of Arkansas, agreed that Tuesday's vote was symbolic and will likely "go nowhere," but, she said, the very fact that it happened should give Arkansans cause for alarm.

"I think that, for those who are not yet paying attention to local politics, hopefully this will get their attention and they'll take it seriously, that there is a lot of animus towards same-sex marriage," Sklar said in a phone call Thursday. "And while this particular measure may be a non-starter, they need to pay attention and to get involved."

Sklar pointed out some concerning language in the proposed amendments. The one that would ban abortion, for instance, contains no exceptions — neither for the health of the pregnant person nor in the case of pregnancies resulting from rape or abuse.

"This ban that's proposed shows nonexistent value for a woman's life or health," Sklar said, adding, "That is an actual value that exists in the state legislature."

It's the message behind Tuesday's vote, Sklar said, that's most troubling.

"Tell your legislators what you think," she urged. "Tell them you vote."