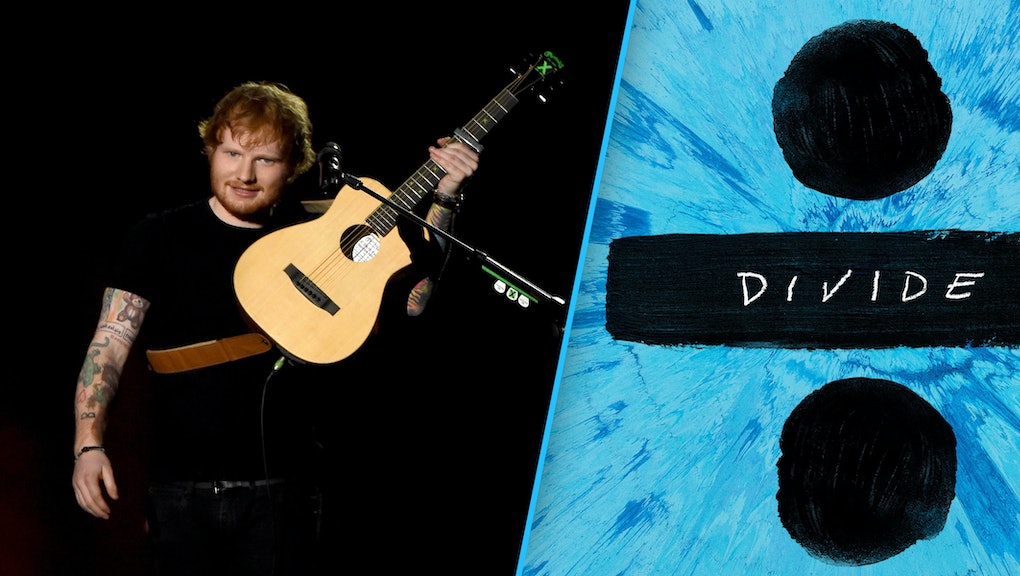 A strange thing happens to many people when they become adults and enter their 30s. Besides becoming hopelessly nostalgic and suffering more brutal hangovers, young adults also tend to stop listening to new music. Ed Sheeran's Divide is the reason why.

Friday, Sheeran dropped his "long-awaited" Divide album, as it's been described. But really, who was waiting for this? Bougie coffee shop owners? People who run children's barber shops? No one needed to wait for it, because they knew as soon as Sheeran releases new singles they'll be everywhere — playing incessantly on the radio in various commercial spaces and bars with no style. Why? Because it's music inoffensive, formulaic and blank enough to placate but not distract.

It also feels why people stop seeking new music after a certain age. They hear music like Sheeran's Divide everywhere, it sounds almost exactly like songs they've heard hundreds of times over in various forms and say to themselves "Why bother? I know what I like." It's Coldplay for Gen Z; Rod Stewart for the younger generation who can define what "woke" means for their relatives at Thanksgiving; hip-hop for those who feel the messaging of #BlackLivesMatter is a little too aggressive. The 2018 Grammys might as well cut to the chase and give it all their awards now and spare the world the suspense.

The thing about music we hear as kids is that it naturally comes charged with an emotional glow. We're making some of their most vivid and exciting memories at that age — first kisses, first sushi rolls, first solo vacations, whatever — the music that soundtracks them will always have a nostalgic power.

Sheeran's music tries to capture that feeling, explicitly, even desperately so. So many of the songs are explicitly about trying to hold on to that fleeting youth and the songs that came with it. "Singing to 'Tiny Dancer,'" he croons on "Castle on the Hill." "And I miss the way you make me feel, and it's real." Sheeran sings about dancing to "Van the Man" on "Shape of You," discusses how his girlfriend makes him feel younger when they're alone stealing kisses in a car on "How Would You Feel (Paean)."

The record is obsessed with discussing and trying to cultivate this wispy sort of nostalgic feeling, because that is Sheeran's in. That's how he'll hook older ears, and how he'll ensure his music will be played at weddings and bar mitzvahs for years to come. It'll work for some. For those for whom it doesn't, there's so little else to grasp, it simply reeks of radio's continuing obsession of trying to leverage familiar-sounding music into the real estate of its listeners minds. It's so excessively derivative and accessible one can't help but feel they've already heard it a million times on first play through.

There are breaks from the sentimental, acoustic monotony, but they feel so shoehorned in, the album would probably be better off without them. After 12 tracks of light acoustic guitar jams and pithy takes of pop' tropical tourist vibes, the happy-go-lucky fife jam "Barcelona" sticks out like a sherbert orange PT Cruiser in the Walmart parking lot. "Bibia Be Ye Ye" is the song your friend wished they made after coming back from that mission trip painting fences in Ghana.

The unflattering rapped description of an ex's "New Man" also highlights so much of what makes Sheeran's music is able to resonate on a global or universal scale. "He's got his eyebrows plucked and his arsehole bleached," Sheeran raps. "Owns every single Ministry CD/ Tribal tattoos and he don't know what it means." All that's "fine by me," Sheeran assures his audience — he's a nice guy after all, the nicest guy — but Sheeran knows the real you: "Baby, I'm not tryin' to ruin your week/ But you act so differently/ When you're with him, I know you're lonely."

Sheeran knows what you need. He knows what kind of music you need to be listening to, and he and his label are going to blast it at you out of every radio until you agree or give up on pop altogether.