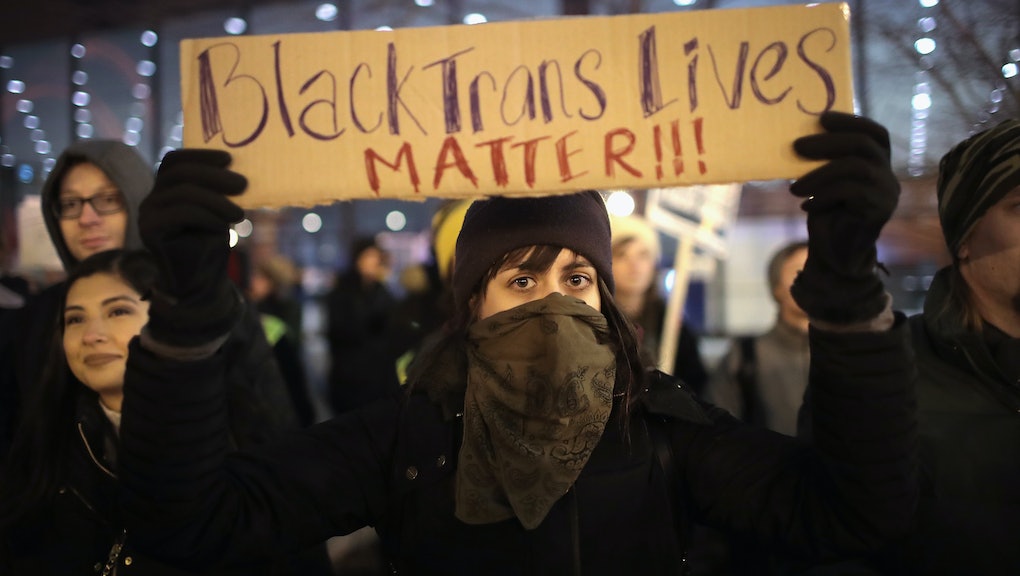 Protesters in Chicago on Friday night stood in solidarity with the country's transgender community, one that's still reeling from the homicides of four transgender women of color in the past two weeks.

Marching for Keke Collier of Chicago and Chyna Doll Dupree, Ciara McElveen and Jaquarrius Holland of Louisiana, participants met near Chicago's Trump Tower and paraded and chanted through the streets with the transgender. According to several tweets, thousands of people attended the rally.

At one point, demonstrators broke out into a chorus of "We're here, we're queer, we're fabulous, don't fuck with us!"

The words, which allude to T.T. Saffore, killed in Chicago in September, and Collier, reference the debate going on in state legislatures nationwide over the right of transgender people to use restrooms that match their gender identity. In February, the Trump administration backed off the Obama administration's directive interpreting federal statute Title IX as one that protects transgender students in this manner.

At one point, those marching began to chant outside a correctional facility in Chicago. One video captured lights in the prison flashing as demonstrators chanted, "Hey hey! Ho ho! Incarceration has got to go!"

Several videos and photos noted the significance of trans people being put front and center in the march. One Twitter user, whose tweets are private, said organizers put the march together after noting that transgender people frequently stand in solidarity with other communities at rallies but are rarely, if ever, asked to take the stage themselves.

Several people also shared words of gratitude for the rally on the march's Facebook page.

"I saw so many people standing in solidarity with trans folx and non binary people," one commenter wrote.

"I see you, I hear you," another person wrote. "When trans lives are under attack, we will continue to stand up and fight back."

This showing of solidarity comes at a crucial time: Later this month, Gavin Grimm's case is set to be heard in the Supreme Court. In January and February alone, seven transgender women of color have already been reported killed as a result of anti-transgender violence.