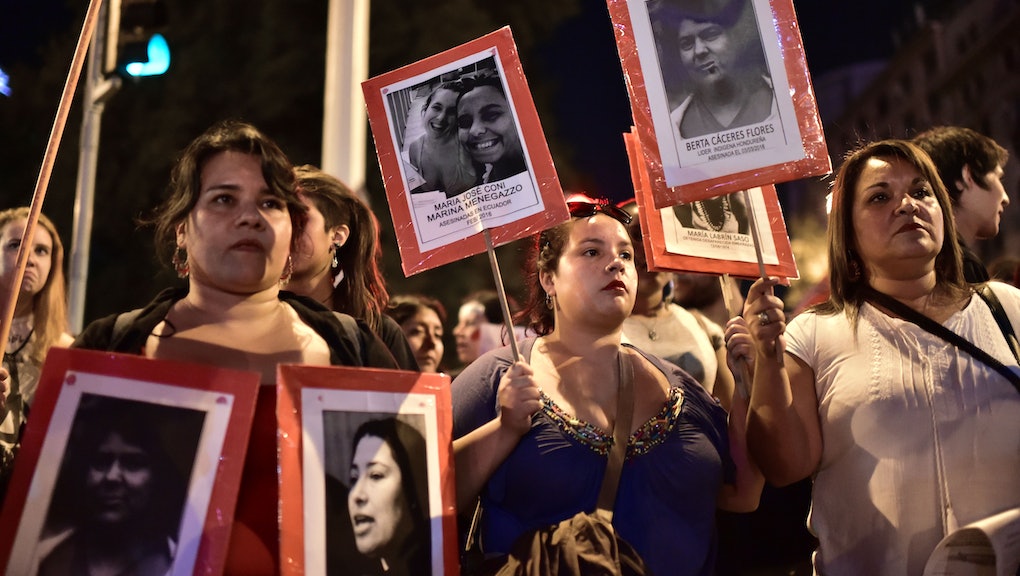 The history of International Women's Day

On March 8, countries around the world will join together to celebrate women as part of International Women's Day.

To commemorate the occasion, women will fight for their equal rights as part of the International Women's Strike. In the United States, the holiday will also be marked by the A Day Without a Woman protest, in which women are encouraged to abstain from work or shopping at businesses that aren't owned by women or minorities.

By using March 8 to fight for equality, women are returning to the activist roots of a 106-year-old holiday with a long and radical history.

The inspiration for International Women's Day dates back to 1909, when the United States celebrated the first National Woman's Day on Feb. 28. The holiday was declared by the Socialist Party of America, reportedly as a result of a 1908 garment workers' strike in which women protested against poor pay and working conditions. The national holiday would continue to take place on the last Sunday in February through 1913.

"It is true that a woman's duty is centered in her home and motherhood," author and lecturer Charlotte Perkins Gilman told a New York City crowd about the occasion, "but home should mean the whole country and not be confined to three or four rooms of a city or state."

The following year, Europe drew inspiration from the American holiday at the Second International Conference of Working Women in Copenhagen, which drew 100 women who represented unions, socialist parties and working women's groups in 17 countries, along with the first three women elected to Finnish parliament. German socialists Luise Zeitz and Clara Zetkin proposed an International Woman's Day that was unanimously approved.

International Women's Day, whose official date was set in 1913, became a "mechanism for protesting World War I," according to the United Nations. In 1914, women held rallies across Europe on March 8 to stand in solidarity and to protest the war; in addition, a London protest in favor of women's suffrage stretched from Bow in East London to Trafalgar Square.

The holiday particularly took hold in Russia, where a Women's Day took place for the first time in 1913. In 1917, Russian women commenced a massive strike on March 8 (Feb. 23 on the Julian calendar then in use by Russians). Led by Russian feminist Alexandra Kollontai, the protesting Russians called for "bread and peace" in response to the deaths of Russian soldiers in World War I and Russians' poor living conditions. The four-day strike was a huge success, culminating in the czar's abdication and the granting of women's suffrage from the ensuing provisional government.

"23 February (8th March) was International Woman's Day and meetings and actions were foreseen," Russian revolutionary leader Leon Trotsky wrote, as quoted by the World March of Women. "But we did not imagine that this 'Women's Day' would inaugurate the revolution."

However, the war had the opposite effect on Women's Day celebrations in the United States, as the holiday's socialist ties made it "deeply unpopular" with Americans.

"It was the Socialist Party of America that originally designated Women's Day in this country, and with World War I and the Bolshevik Revolution, socialists became pariahs to a large extent in the United States," Barnard College professor Rosalind Rosenberg told RadioFreeEurope. "The party persisted, but it didn't have the kind of popular support that it had had before World War I in the United States."

The holiday took on an anti-fascist stance during World War II, as women from Allied nations used March 8 to further resist Adolf Hitler and the Axis powers. A 1943 newspaper article from Australia described the International Women's Day celebrations as "symbolic of the United Nations' effort to defeat fascism." Similarly, a January 1944 edition of Eleanor Roosevelt's "My Day" column recounted a cable from Great Britain, which said British and allied women celebrated the holiday "to affirm resolve together that all free women achieve speedily final defeat Hitler."

In her column, Roosevelt wrote that she was "glad to know" women from different countries were gathering "to celebrate an international day to help speed victory and to help in reconstructing a world in which peace may be achieved."

In 1965, the USSR declared the holiday a nonworking day to "commemorate the outstanding merits of Soviet women in communist construction and in the defense of their fatherland during the Great Patriotic War, their heroism and selflessness at the front and in the rear, and also to mark the great contribution of women to strengthening friendship between peoples and the struggle for peace."

Contrary to its revolutionary roots, however, the holiday soon became a much more benign celebration in these communist nations, similar to Valentine's Day or Mother's Day. The Daily Beast noted the day is marked with gifts and flowers for important women in one's life.

Since then, the U.N. and countries around the world have celebrated the occasion as a way to honor women and fight for their rights. Official themes adopted for the yearly celebration, which were first adopted by the U.N. in 1996, have included "Celebrating the Past, Planning for the Future," "Empower Rural Women, End Poverty & Hunger" and "A Promise is a Promise — Time for Action to End Violence Against Women."

In 2011, the holiday celebrated its 100th anniversary since the first European events in 1911. In response, former President Barack Obama declared March "Women's History Month" and called on Americans to mark the holiday by celebrating "the extraordinary accomplishments of women" who helped shape America's history.

Former Secretary of State Hillary Clinton also launched the 100 Women Initiative, allowing 100 women from 92 countries to take part in a professional exchange program in the United States. Outside of the United States, British activist Annie Lennox organized "Join Me On the Bridge" events in support of the centenary, which took place in London and other cities worldwide.