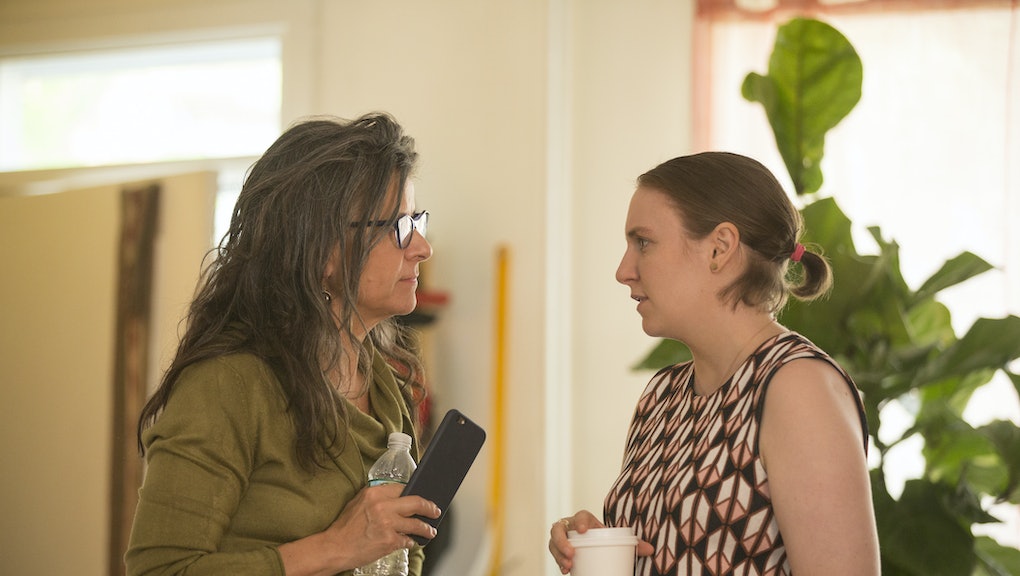 After its stunning and brutal standalone episode, Girls brings back the rest of its cast, and — in the first move that truly signals a wrapping up of the series — has Hannah, Ray, Marnie, Jessa, and Adam looking forward. Well, for the most part.

"Painful Evacuation" opens with Hannah interviewing a famous writer, Ode Montgomery, played by Tracey Ullman. Ullman's character gives Hannah plenty of advice, from telling her that it's a ridiculous myth when male writers say they want to write in isolation. Most suggestively, she tells Hannah that the key to being a female writer is to never be a mother.

It's a quick scene, one that is undoubtedly meant to parallel the previous episode, which featured another famous writer, a man Hannah idolized before learning that he was a creep who lured in vulnerable young women while touring college campuses. This time, however, Hannah and us audience members are supposed to listen closely to Ode's words. But let's hold off on that for a second.

We then catch up with Marnie and Ray. They're having sex. Marnie is in her own head and not into it. When Ray orgasms, her faux commitment to him comes into focus. With him still inside her she tells him, "I want to die inside the mouth of a lion with you, and that way we could be together forever." It's what she wants to be told and Allison Williams' uncomfortable delivery of the line proves that year after year she's continuously one of Girls' greatest comedic forces.

She doesn't feel passion and it probably doesn't help that Ray remains seemingly oblivious to the fact that she went on a road trip with Hannah and Desi, renewed a sexual relationship with Desi and learned that throughout her brief marriage to him he had been addicted to Oxycontin. This seemed liked a superfluous reveal in episode two, but Desi's problems and what they say about Marnie begin to come together. The ramifications of Ray's own complacency also come into focus.

Marnie meets Desi and his counselor. Desi tries to tell her that she's been an enabling force throughout their time together. The scene is comedic (there's a moment where Desi uncomfortably chugs a glass of water that's golden) but it's also an opportunity for Marnie to confront her own narcissism. As Desi explains how oblivious she was to his own problems, how she never actually saw him as a person, Marnie tells the counselor, "I have bruises all over my body from the two hour massages I need to deal with the stress of his addiction." Naturally the counselor tells Marnie that she's making Desi's addiction about her, but we'll have to wait to see whether or not it registers.

Ray confronts trauma after trauma this episode, and it doesn't exactly work. It feels a little to on the nose. First off, a regular at the coffee shop he manages dies in front of him. This causes him to question his life choices with his boss Hermie. At the end of the episode Ray finds Hermie dead, the second death he witnesses in such a short amount of time. As awful as they are for Ray, they feel like a lazy and easy way for the writers to get Ray to grow up.

But back to Hannah. Hannah has a UTI, and after a push from her mother she gets off the toilet and goes to the emergency room to take care of things. It's there that she has an awkward run in with Joshua, the extremely good-looking doctor she had a brief and reckless affair with in Girls' first bottle episode, "One Man's Trash." Bringing back Patrick Wilson, who plays Joshua, was a wonderful and uncomfortable choice that not only ties back into last week's bottle episode, but answers whether or not Hannah's "One Man's Trash" experience was real or some sort of dream. It also serves as the first surprise that disarms us for the second and greater reveal of the episode.

Joshua tells Hannah that in addition to her UTI, she's pregnant, which not only ties right into Ode's warning, but also to the first episode of the season, where Hannah has a weekend fling with a Montauk surf instructor. Just like that she's confronted with adulthood, with a reality we don't see very often from Girls. Lena Dunham is excellent in this scene, all the more so when she rebuffs Joshua's offers to help her with an abortion. He's being presumptuous, and the shock hasn't even settled enough for Hannah to decide what she wants. So she goes home.

She goes home and is ambushed by a manic Adam and Jessa, who are the only two characters who haven't seemed to make any giant moves this episode. Adam quits an acting job that he deems unworthy and Jessa, who wants to fix him, suggests they make a movie about their relationship and how they betrayed Hannah. The caveat? In their own delusional minds they believe they need Hannah's permission first. So they show up just as she arrives home from the hospital. It's a wonderful scene, one that truly posits Hannah as over their bullshit and immaturity. She has bigger things to think about and leaves them in the hallway. The episode concludes with her lying on Elijah's lap, contemplating a decision that will ultimately be a huge plot point for the rest of the series.

Mic has ongoing coverage on Girls. For more information, check out our Girls hub here.