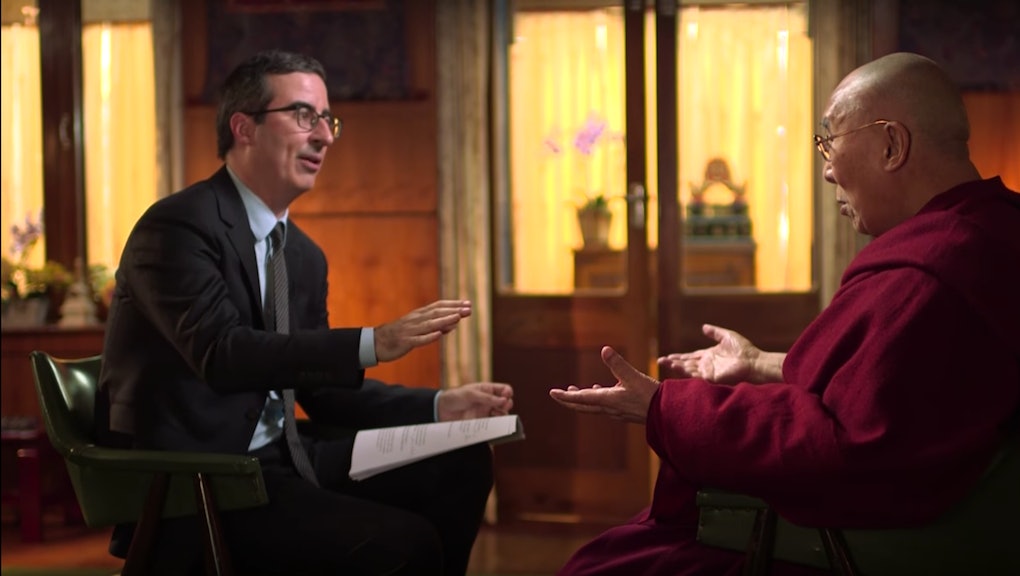 John Oliver talks to the Dalai Lama about reincarnation, horse milk and more

Last Week Tonight host John Oliver has landed some pretty impressive interviews for what is, first and foremost, a late night show. Even so, he's spoken with Stephen Hawking, Jane Goodall and Edward Snowden in conversations that are equal parts hilarious and informative. Now you can add a religious figure to the list: the Dalai Lama. Or as Oliver calls him, the "original woke bae."

The conflict between the Dalai Lama and the Chinese government has become even more complicated, as Oliver notes, because the current Dalai Lama may not reincarnate. The Chinese government has installed their own Panchen Lama — after kidnapping the original — who helps find the Dalai Lama's successor, and vice versa. Because the Chinese have a replacement, they can ostensibly name their own Dalai Lama successor who happens to support China's rule over Tibet. It's a messy subject for Oliver to break down.

"There is really only one person who can fill you in on what is happening in the Dalai Lama's head, but he lives in India, and that is a 14-hour flight away — and the reason I know that is I went to speak to the Dalai Lama in India," he says.

For anyone who's seen interviews with the Dalai Lama, he has an infectiously hearty laugh that's on full display with Oliver. The two discuss China's negative viewers on the Tibetan leader, whom Oliver says they likely picture as an actual demon with horns.

"Whatever they want to say, that is their freedom," the Dalai Lama responds. "I have no negative feeling. I just feel love, like that. I practice, you see, taking others' anger, suspicion, distrust and give them patience, tolerance and compassion. I practice that."

While Oliver tries to explain to his viewers how powerful the Dalai Lama's words can be, the Dalai Lama offers up an unexpected, yet glorious, anecdote involving horse milk. He says that during a visit to Mongolia he noticed a lot of people drinking vodka, so he suggested everyone drinks horse milk instead. This apparently went over well, which shocked Oliver.

"Hold on, that is a huge claim," Oliver says. "You cured Mongolia of alcoholism ... using horse milk?"

Oliver then moved the conversation toward a "lighter subject": What happens when the Dalai Lama dies. The Dalai Lama said it is "very possible" that he could be the last incarnation, but notes that the focus of Buddhism for its millions of followers is more important than an individual. When Oliver mentioned that the Chinese could just find their own replacement, the Dalai Lama rebuked the notion with some incredible shade.

"That's also, you see, one of the foolish acts," he says. "Short-sighted. Without using human brain properly. It's harmful ... our brain usually, you see, [has] the ability to create common sense. The Chinese hardliners, in their brains, that part of the brain is missing."

You can check out Oliver's interview with the Dalai Lama below: