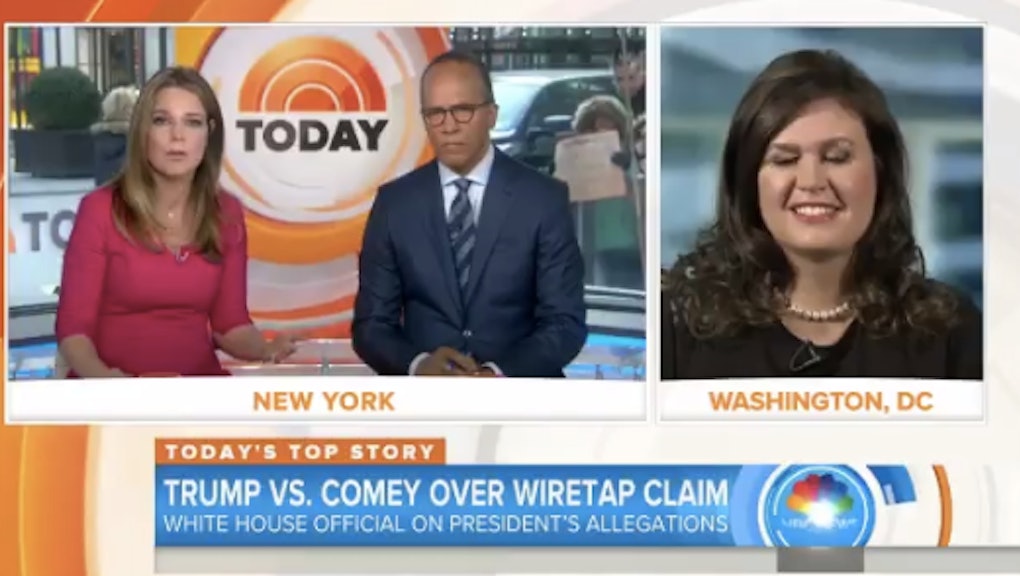 On Monday morning, the president's spokespeople were still struggling to explain where those claims originated.

White House spokesperson Sarah Huckabee Sanders appeared on NBC's Today to speak about the president's accusations against his predecessor, and she seemed to have a hard time answering some of host Savannah Guthrie's simple questions.

Many people, including some close to Trump, speculated that his wiretapping accusations were connected a Breitbart News report that Obama had taken steps to "undermine" Trump's campaign, the New York Times reported on Saturday.

Guthrie asked Sanders about this in plain language. "We've learned, from the White House and other sources, that in fact this is drawn from media accounts," she said. "Can you, before we even go further, can you just let us know, is that the source of this information? Strictly from media reports and not from any other source?"

Sanders gave a noncommittal answer, saying that the president "firmly believes" that the Obama administration "may have" ordered wiretaps on the phones at Trump Tower during the campaign.

Guthrie pressed her again: "And is that based on media reports?"

Sanders still avoided answering Guthrie's questions about the source of Trump's information, pivoting instead to complaints about "the media." But Guthrie kept going.

"Just so we're clear on this one specific point, is his information, that President Obama tapped his phone, based solely on something he read in the media?" Guthrie asked. "Yes or no?"

Instead of giving a yes or no answer, Sanders said she hadn't had the chance to speak to Trump directly. She said the president is at a "much higher classification" than she is, so he could potentially have access to "documents that I don't know about."

Trump's tweets didn't merely suggest the wiretaps were a possibility that required further investigation, Guthrie pointed out. Instead, they "stated, as fact" that Obama had tapped his phones.

Sanders said the media "loves to create this false narrative against the current president, but is so quick to dismiss anything under the past administration."

Then she offered up a bizarre metaphor. "If the president walked across the Potomac, the media would report that he couldn't swim," she said. "All we're asking is that the same standard be applied to this president as the past president, and let's look and let's get the details and let's put those out there for the American people to make a decision."

At this point, Today host Lester Holt interjected: "Well, to be fair, I think we are trying to get the details from you right now."