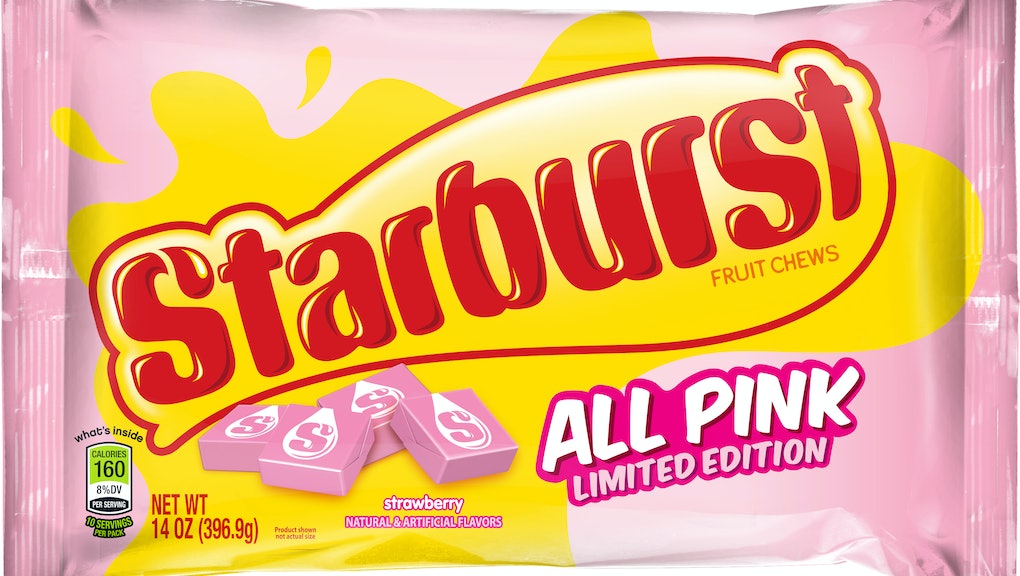 Starburst announced Tuesday it will finally sell Starburst packs that only have pink candies inside. That's right — your days of suffering through inferior flavors like purple and yellow are behind you. No more tasting the rainbow! It's all pink, all day. The "All Pink" packs will be available in April for a limited time, a spokesperson said in an email.

In 2008, Starburst released FaveREDs, a mix of pink and reds. The red and pink mixture "received immense consumer love," Matt Montei, senior director of confections at Wrigley, said in an email. Motei explained the company continued to field requests for a product that had only the pink chew.

Because people just really want to swim in a sea of pinks. Can you blame them? Look at this sweet, sweet deal:

"From memes about relationships to sharing photos of excitement when getting a pink Starburst, over half of all references to Starburst on social media are about pink Starburst," Montei noted.

Eating a pink Starburst feels special. It's not just a strawberry-flavored candy — it's pink, the taste of being blessed by the candy gods above. (Orange pales in comparison.)

Everyone knows getting two pinks in a two-pack is basically better than winning the lottery.

Giving away the elusive pinks to someone else is even #relationshipgoals for some super fans.

But times they are changing, and these days, a whole pack of pinks can be yours — no luck or generous significant other required. The "All Pink" packs are available in the larger family pack size and also the standard Starburst tubes, seen below.

Want to get your hands on an "All Pink" pack? You will be able to find the new Starburst packages at Walmart, Walgreens, Target, Kroger, Meijer, H-E-B and Amazon. A single pack costs $0.99 and a bigger pack costs $3.19, a Starbursts representative said in an email.

Will Starburst ever consider blessing red Starburst fans with "All Red" packs?

"At this time, we aren't seeing fans ask for a pack of another single flavor the way they are asking for pink Starburst, but you never know what could happen should we see a groundswell of support for another flavor," Motei said.

There you have it — if you meme hard enough, you just might change the candy world. Power to the people!