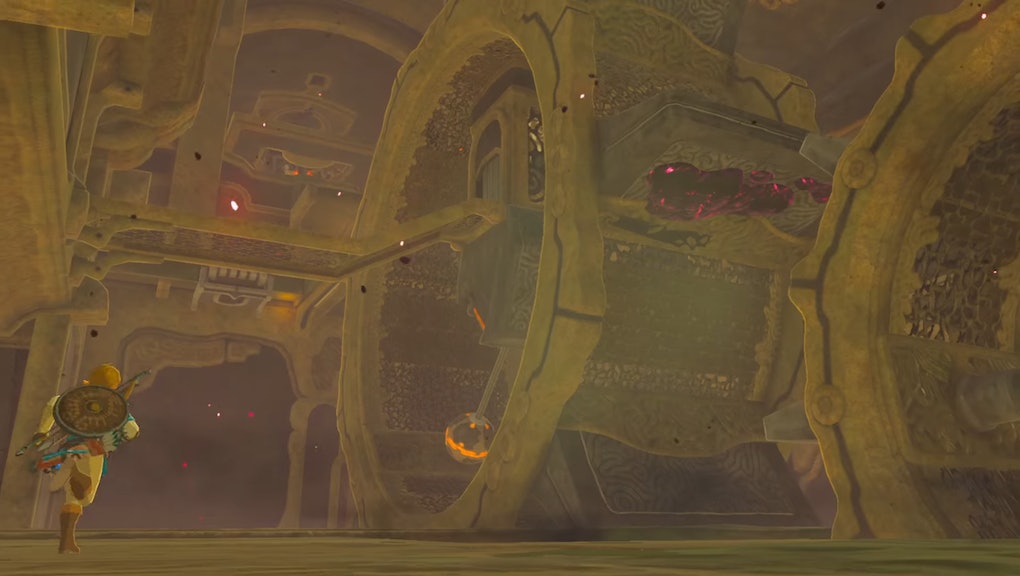 'Zelda: Breath of the Wild' Vah Ruta Walkthrough: Guide and tips to beat the Zora dungeon

If you're struggling to beat the Vah Ruta mission The Legend of Zelda: Breath of the Wild you've come to the right place. This walkthrough will show you the way.

(Editor's note: Spoilers for the Vah Ruta portion of The Legend of Zelda: Breath of the Wild ahead.)

Early in the story of The Legend of Zelda: Breath of the Wild, Link is tasked with finding the four Divine Beasts and cleansing them of Calamity Ganon's corruption. However, these beasts aren't mere animals; each is a gigantic mechanized creator with something like a traditional Zelda dungeon inside of it.

Perhaps the easiest one to do first is Vah Ruta, a gigantic elephant mech that is bringing torrential downpours upon Zora's Domain by shooting water out of its enormous trunk. If you're stuck in Vah Ruta, keep reading to find out how to go forward. This information comes courtesy of VG247 as well as my own playthrough.

Zelda: Breath of the Wild Vah Ruta walkthrough: Getting started

Dungeons in Breath of the Wild don't work like they have in every Zelda game prior. Instead of working through a series of enemy encounters and puzzle rooms to get a map, a compass and keys to unlock new areas until you reach the boss, your objective here is to activate five terminals so you can take control of Vah Ruta.

Sounds easy, right? Unfortunately, those terminals are hidden behind a bunch of pesky, physics-based puzzles. There are also a couple of small guardian enemies to deal with and some pathways blocked by corrupted ooze. To deal with the ooze, simply shoot the corresponding gross eyeball with an arrow and it'll go away.

Upon entering the dungeon, a disembodied voice will point you toward the left side of the first room, which features a map terminal behind a set of bars. It's imperative that you download the map before doing anything else, as it unlocks a key feature of the dungeon.

You might notice that there is shallow water underneath the bars gating off the map terminal. Aim your Cryonis rune at the floor below the bars to use an ice block to lift them up. Once you've downloaded the map, you'll see the locations of the five terminals.

You'll also be able to adjust the position of Vah Ruta's elephant trunk from the map screen. No, seriously. It's really cool and you'll need to do this later.

After walking out of the map room, run straight ahead to the other side of the main room and look in the left corner. There's a pool of water with a big rotating lever on the wall. Equip your Magnises rune and rotate the crank until the first terminal is fully outside of the water. Go up and activate it to get the first of five terminals out of the way.

Immediately to the right of the first terminal is a ramp leading down to the main control room of Vah Ruta. You won't need to go in here until you've found all five, so leave it for now.

Go upstairs to the second floor. Before doing anything else, take care of the small guardian monster. Once it's dead, take notice that this room features two huge gears. The smaller of the two is rotating; the larger one is not.

The second terminal is inside the smaller, rotating gear. It's rotating because of a water spout on one side of it. Use Cryonis on the spout itself to block it, but make sure it's timed so that the terminal is upright. If it isn't, you won't be able to activate it.

The third terminal is a bit more problematic because you can't get to it without making the other, bigger gear rotate. This is where Ruta's trunk comes into play.

First, head out to the ramp that takes you up to the next floor. There will be some corruption in your way that features a spawning point for enemies. Look up to find the eyeball and make it go away.

Keep heading up until you get to the third terminal, which is behind a gate. The unlocking mechanism for this gate is inside the gear, but it won't work until the gear is turning. Open up your map and readjust Ruta's trunk so it's about three-quarters of the way to the top of its arc. Water will pour in through the roof, causing the gear to rotate.

Wait for the orange ball inside the gear to fall into the blue slot, and then lock it into place with Stasis. The door will be open long enough for you to activate your third terminal.

At this point, you need to get on top of the larger gear that you made rotate with Ruta's trunk. Ride it to the top and face the front of Ruta, where the trunk is. You'll see a platform to jump and glide to with a guardian on it. Kill the guardian and hit the switch on the floor to create a waterfall shortcut you can use with your Zora armor.

There's only one passageway out here, which leads outside to the trunk itself. This is where things get really fun. Lower the trunk all the way and run out to the end of it. Take out the corruption and grab the chest while you're here.

Now, stand on the end of the trunk and raise it up. Try to stay on it as long as you can while facing Ruta's body. Once you're up high enough, jump and glide to Ruta's back. There will be a hole in the floor here that you should drop into.

Shoot the corrupted eye on the ceiling, which unlocks a mechanism you can rotate with Magnesis. Turn it until the ceiling above you opens up. Adjust Ruta's trunk until the water is pouring in through this new sunroof you've created, which will put out the fire surrounding the fourth terminal directly below you.

Drop down and use that waterfall to make your way back up to Ruta's trunk. Make sure the trunk is at its lowest point, and jump and glide until you land on the part where the water is actually coming out. While standing here, raise the trunk all the way to the top and make sure not to fall off.

Once it's all the way up, you'll find the fifth terminal is yours for the taking on the other side of the trunk. Activate it and make your way all the way back to the first room to main control terminal.

You probably know what's coming next, but just in case, now is the time to make sure you have plenty of food, arrows and weapons on you.

Activate the main terminal and the dungeon's boss, Waterblight Ganon, will appear. Unlike bosses in previous Zelda games, Waterblight Ganon can be fought sort of however you want. Instead of using an item to expose his weakness three times, any attack you land will do damage to his now-visible health bar. Like everything else in this game, you can fight him in a variety of ways.

At the start, it's probably easiest to get close, slash away with one-handed weapons and use a shield or dodge when he's about to attack. You can stun him and make him fall to the ground by hitting him a bunch or shooting him in the eye with an arrow, which requires pretty precise aiming in a fast-paced boss fight.

If you do stun him, I suggest pulling out your strongest two-handed weapons and wailing on him until he gets back up. The only other thing to know is that he'll occasionally do a ground pound-like attack if you're close to him. He telegraphs this by rising into the air and charging up; the best thing to do is sprint away and use the opening once he's done to get some hits in.

Once his health is halfway gone, the fight goes to a second phase. The room is now filled with water, and you only have four platforms to stand on. Waterblight Ganon will move around the room, but he will always be positioned directly above one of these platforms.

You can try to move with him and attack from underneath, but what I did was go to a different platform and shoot him in the eye. Once he was down, I moved in and pounded on him with a two-handed sword to do massive damage. If you still have any shock arrows left from the sequence before entering Vah Ruta, they will do extra damage to Waterblight Ganon.

Eat food to recover health or boost your attack and defense as needed. For this second phase of the fight, remember that the Zora armor makes you swim faster. Find a strategy that works for you and wail on Waterblight Ganon until he isn't a problem anymore.

If you're still struggling you can also check out this video guide for extra tips on beating the boss.

More Breath of the Wild stories