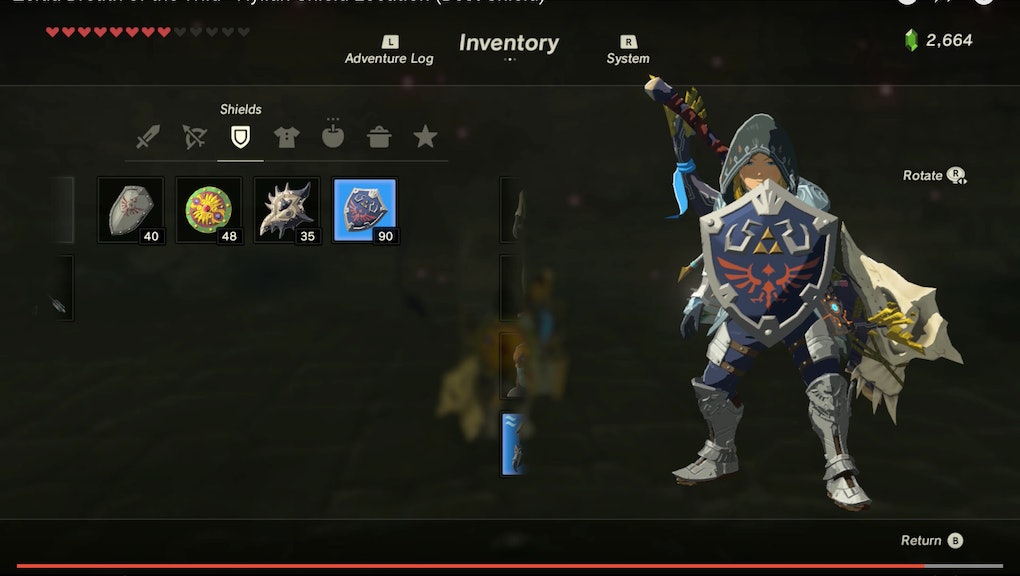 'Zelda: Breath of the Wild' Hylian Shield location: Where to find the unbreakable weapon

Legend of Zelda: Breath of the Wild follows in the footsteps of 2011's Skyward Sword by giving Link equipment that degrades and breaks over time. If that's not your jam, you can get the unbreakable Master Sword late in the game (no surprises there) and not have to deal with it. If you'd rather not worry about your shield breaking either — or if you just want to shield-surf to your heart's content — you can also get the unbreakable Hylian Shield in Breath of the Wild.

What's even better is you can get it extremely early in the game if you're careful and good at combat!

Update: It turns out the Hylian Shield can break after all, though it is extremely durable. Thankfully, there's a way to replace it in the game.

To get the shield, GamersHeroes advises that you make your way to the north of Hyrule Castle. Be sure not to enter the front gates, but walk around the castle until you hit a giant red spire (pictured below).

After finding that spire, head into castle and you'll end up on a new map. If you did it correctly, you'll be close to where the dungeons are, which is where you want to go. But if you find yourself above the docks you went the wrong way.

Next, make your way into the cells and through the area into the last room. There, you'll have to take out an undead Hinox called Stalnox.

To beat the Stalnox, you have to knock its eyeball out of its skull either by shooting it with an arrow or dealing a massive amount of damage to its body. You can't kill it until you kill the eyeball, so be aggressive, and it should fall in short order.

Once it's taken care of, a chest will appear in the back of the room and when you open it up, you'll be the proud owner of an unbreakable Hylian Shield.

If you're still having trouble, check out this video guide from YouTuber user BeardBear.

Find out all there is to know about Zelda: Breath of the Wild, including what to expect from the Wii U version, how to preserve your items, how to beat bosses like the Stone Talus and Lynel, the best recipes for Link and how to take on the game's shrines. You'll also want to find out where all the great fairies in the game are and how to use amiibo with your version of Zelda.