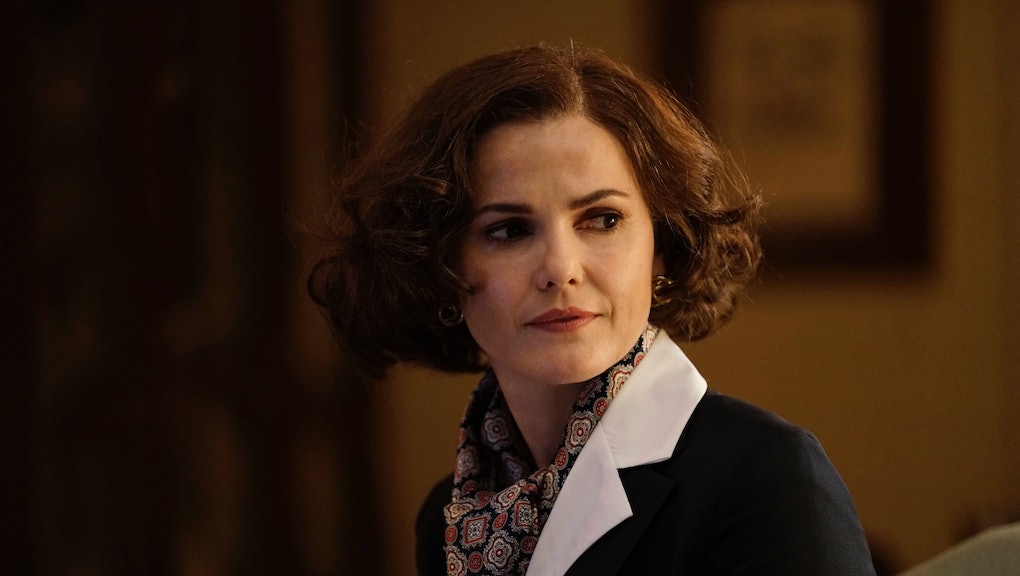 'The Americans' Season 5 Premiere Recap: The children are our future

It's a rare breed of television that can make 13 minutes centered on excavating a corpse not only interesting, but the most heart-pounding sequence of the entire episode.

But for anyone who has been watching The Americans since the beginning, this is what we've come to expect of the Emmy-nominated series. The Cold War drama, which kicked off its fifth season Tuesday night, is a regular on TV critics' best-of-the-year countdowns, and The Americans' penultimate season is showing no signs of slowing down its momentum or its excellence.

In a strange irony, it also appears that The Americans will benefit from the seemingly perpetual headlines pertaining to United States-Russia relations: It is impossible to not make comparisons between what is happening in 2017 and what happened between the countries back in 1984. So to use a cheesy tagline from the 1990s, The Americans, through its own brilliance and serendipitous timing, has become must-see TV. For more on this topic, be sure to check out our interview with showrunners Joe Weisberg and Joel Fields.

Despite the narrative's spooky resemblance to modern-day reality, The Americans remains, three seasons after star Keri Russell first spoke to me about it, a show about "the family dynamic." Yes, the season premiere, titled "Amber Waves," introduced a subplot of food shortages in the Soviet Union that will inevitably involve several of the main characters (including KGB agent Oleg Burov, now back in the USSR) — as well as spent its back end tying up season four's Lassa virus storyline. But, it is plain to see that the real drama, as always, is in Philip and Elizabeth Jennings' cozy suburban home, where their teenage daughter, Paige (Holly Taylor), continues to grapple with her future. All she wants is to date the boy across the street and not have to worry about her constant nightmares (watching her mother kill a mugger with her bare hands will do that to you) or the fact that her boyfriend's dad is an FBI agent — Stan Beeman (Noah Emmerich) — with the power to put her parents behind bars.

As with any season premiere, there's a lot to cram in: New plot points and characters need to be introduced, and, in the case of "Amber Waves," some last-season stories need to be resolved. So while Paige may not have been front and center in the episode, her few scenes leave little doubt that she is the character to watch this season. Paige, since the beginning, has demonstrated an innate knack for the family business, and though she's still struggling with the moral implications of her parents working for the Soviet Union, with every passing episode, she is moving closer toward her destiny. The teen may have been freaked out by Elizabeth's lethal capabilities last season, but she receives her first lesson in self-defense in "Amber Waves," and let's just say we shouldn't expect to see her wearing an Esprit sweatshirt for these classes going forward.

The emphasis on Paige epitomizes one of the major themes this season, which seems to be (and apologies for another cheesy line from the past) "The children are our future." Back in season two, Philip Jennings balked at the idea of using his younger son, Henry, as part of a dead drop, telling his KGB colleague, "We don't use our kids." They still don't use Paige or Henry for jobs, but their latest mission is slowly moving toward what seems to be the Centre's endgame, which is infiltrating America through the younger generation: This season, Philip and Elizabeth are tasked with getting close to a Russian defector consulting for the Department of Agriculture (remember that food shortage plotline). But instead of the seasoned Soviets working their target directly, they have a Vietnamese kid posing as their adopted child who befriends the defector's socially awkward (and miserable in America) son.

Now, while the children may be the future, they're still incredibly wet behind the ears and the adult spies' best options for casualties of (Cold) war. The Vietnamese boy working with the Jennings, Tuan, already is hardcore committed to their cause, spitting such venomous insults toward the defecting Morozov family that even Philip and Elizabeth are illustrating some doubt about their latest collaborator via their silent eyes. (Fun fact: During the scene in question, Tuan watches the period-correct TV show The A-Team, which has a special place in the heart of Matthew Rhys, who plays Philip.) Tuan could end up being more of a danger than an asset to the Jennings.

Fortunately for Tuan, he hasn't had to deal with the risky side of the spy game just yet. Sadly, that was not the case for Hans, the Jennings' eager-beaver South African agent whose mercy killing closed out the season premiere — as well as the Lassa virus story line. As mentioned earlier, the final 13 minutes of "Amber Waves" saw Philip, Elizabeth, Hans and several unnamed agents working under a cloak of darkness to recover the corpse of William Crandall. William, as you may remember, was a Directorate S agent (like Philip and Elizabeth) who infected himself with the lethal Lassa strain at the end of last season upon being captured by the FBI. However, since the Russians still want that biological weapon, it was up to Philip and Elizabeth to retrieve a sample from William's dead body.

In an extended, dialogue-less sequence, the KGB officers dig up the corpse — and get the sample — only for the silence to finally break when Hans slips, falls and cuts his hand on William's body. Elizabeth, as she's done so many times before, effortlessly puts a bullet in an unsuspecting Hans' head when his back is turned, thus saving him from a slow, painful death (Lassa liquidates your organs) — and the U.S. from an epidemic. But as she and Philip stare at each other in the episode's final moments, their emotions peeking through via only their panicked eyes and pulsating face masks, you have to wonder along with them if they made the right decision to not return to the Soviet Union. (At the end of last season, before William's death was confirmed, it was looking pretty certain that Philip and Elizabeth would have to go home to avoid capture.)

Given the other story lines that filled "Amber Waves," viewers are going to want the Jennings to stick around stateside anyway. After all, there is a big family reunion on the horizon: Philip's son from a previous relationship, Mischa, has already made it into Yugoslavia. Final destination? Washington, D.C.

Remember, the children are our future.