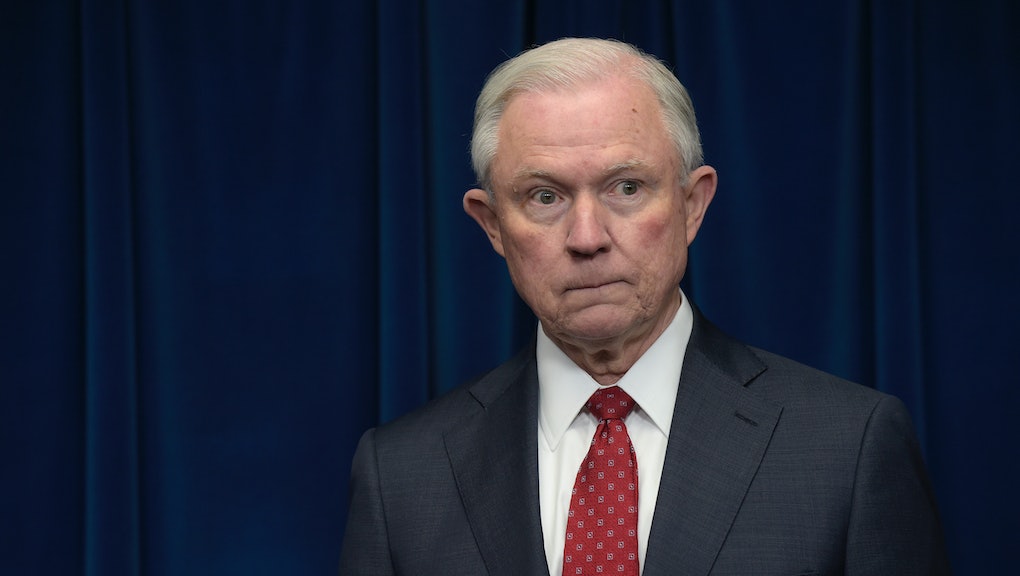 Attorney General Jeff Sessions spoke Tuesday at the Youth Summit on Opioid Awareness in Manchester, New Hampshire, where he regaled attendees with misleading facts about drug use and solutions that failed years ago.

"Criminal enforcement is essential to stopping the transnational criminal organizations which ship drugs into our country," Sessions said, "and to stop the thugs and gangs who use violence and extortion to move their product."

Reality does not support this plan. Most opioid abuse today stems from neither international drug trafficking, "thugs" nor "gangs." The recent spike in opioid-related deaths has been spurred mostly by dependence on doctor-prescribed pain relievers, according to the Centers for Disease Control and Prevention.

The CDC added in its findings that prescription and synthetic opioids are responsible for most deaths by overdose — at 61% — and eventual heroin use in the United States. "To reverse the epidemic of opioid drug overdose deaths and prevent opioid-related morbidity, efforts to improve safer prescribing of prescription opioids must be intensified," said the government body.

But that was just the beginning. Sessions went on to give highly suspect advice on how to prevent young people from using drugs in the first place.

"The most effective solution in the 1980s and early '90s — when, for example, we saw a significant decline in teen drug use — was the Prevention Campaign," Sessions said. "People began to stop using drugs. Drug users were not cool."

Sessions was referring to "Just Say No," a mantra-turned-political crusade spearheaded by first lady Nancy Reagan in the 1980s. As part of President Ronald Reagan's accelerated war on drugs, Nancy Reagan preached abstinence to children.

"Say yes to your life," the first lady said in an address to the nation in 1986. "And when it comes to drugs and alcohol just say no."

The problem was that it didn't really work. In response to Reagan's call-to-arms, anti-drug clubs started cropping up in schools across the country, Vice reported. D.A.R.E. programs — Drug Abuse Resistance Education — brought police officers into classrooms to lecture kids about the dangers of illicit narcotics. Draconian new laws were passed to impose harsher penalties on people who carried drugs in so-called "drug-free zones," including schools, bus stops and even public parks.

But a 2009 review of 20 controlled studies found that kids who were enrolled in DARE programs were just as likely to use drugs as kids who'd received no intervention at all, according to Scientific American.

Drug-free zones fueled mass incarceration, disproportionately sending black and Hispanic people to prison for drug crimes. And in the past decade — as state after state has passed looser marijuana laws — hard drug use among teens has declined, suggesting that moral and legal hysteria over drugs doesn't convince kids to not use them.

The United States is in the midst of an opioid crisis, and the death toll has been staggering. But if Sessions' solution is a throwback to the failed drug war policies of the Reagan, Bush and Clinton eras, it's hard to imagine it gets better.