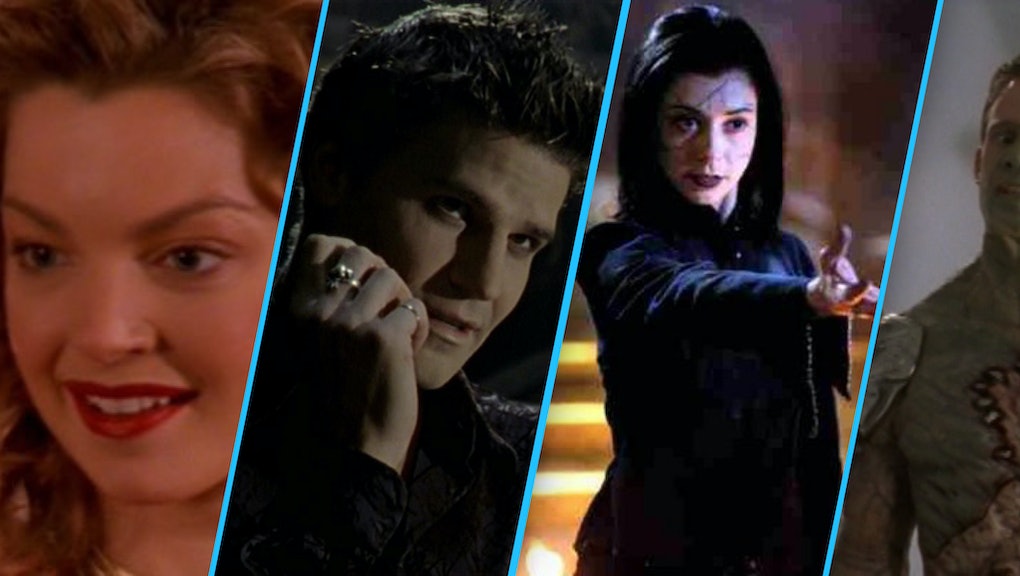 'Buffy the Vampire Slayer' villains: A definitive ranking of the series' Big Bads

At its core, Buffy the Vampire Slayer is a show about the demons each of us faces every day. Whether it's going through a break up, surviving high school, adjusting to college or getting married, there are few real-life situations that don't have a corresponding metaphorical Buffy-verse demon.

But, with each season, aside from the many metaphorical demons Buffy and her group are able to slay, there's one that rises above the rest. Each season contains a "big bad" that Buffy and crew must outwit, outlast and outmuscle. From The Master in season one all the way up to The First, here's a definitive ranking of how much each of these villains slayed — or didn't.

Known much more for its individual character and episode arcs than its overall season arc, season 4's big bad Adam is a clear bottom-of-the-list big bad. Adam may have been one of the rare villains who can physically overpower Buffy, but his lack of a master plan, or the means to execute it, is his fatal flaw.

Made to be the brawn to professor-cum-mad-scientist Maggie Walsh's brains, Adam doesn't have the thinking capability to pull off Walsh's final plan to start a race war between humans and demons in hopes of getting the disembodied parts to craft more cyborgs in his image.

Buffy goes to great lengths to remind you that Adam is part computer. And like a computer, he's mostly programmed to carry out Maggie's plan, despite a "design flaw." Maggie's death (at Adam's hands) is supposed to make him seem unhinged, but ultimately makes him a Pinky in search of a Brain.

Adam is such a lackluster Big Bad that his defeat isn't even what marks the end of season 4. Adam is defeated in the penultimate episode, leaving the last episode, "Restless," to explore what's next for the series' main foursome.

The Master is a completely serviceable villain for the series' fledgling 12-episode first season. More than any other villain, The Master operates as a kind of mafioso archetype who requires extreme loyalty from a gang of interchangeable weak minions who carry out his plans while he's stuck in a sunken church.

The Master suffers from being a much less emotionally-developed character than villains like Angelus or the Mayor while also being a heckuva-lot-less mobile than any other Big Bad. He's no fighter, which means even in his final stand off with the Slayer, it only takes a couple of moves to see him turned to dust — and bones.

The Master does get bonus points, however, for — spoiler alert — killing Buffy.

The lamest Buffy villains with the least amount of power don't exactly get relegated to the bottom of this list.

In his director's commentary for season six of Buffy the Vampire Slayer, creator Joss Whedon said that life is actually season six's Big Bad, which makes sense given how dark and tragedy-driven the show became. Given how amorphous the season is in terms of an overall Big Bad arc, two villains from the season have made it to this list — more on the other one later.

The Trio are inadequate super villains in every way — in terms of strength, power and master plan execution. But, they're also prescient as villains. In a post-Gamer Gate world where Donald Trump is president and the alt-right is flourishing in online chat rooms, The Trio remain perfect examples of the downfalls of toxic masculinity, especially ringleader Warren.

Buffy being underestimated is a part of the show's mythology and DNA, but no other Big Bad seems to hate her for her femininity as much as Warren, who exploits the naivety and trust of anti-cool Jonathan and Andrew to try to gain some phallic power.

The First Evil may sound intimidating, but its lack of a corporeal form and penchant for speaking through dead villains — or Buffy's own voice — rather than adopt its own voice made for a season light on fighting and heavy on speechifying.

The First no doubt threw everything but the kitchen sink at Buffy and friends — Caleb, uber vamps and eyeless minions — but its overall evil plan lacked the substance of someone like Glory, hellbent on going home to her own world, or even Dark Willow, who was fueled by pure passion.

Overall, the First led to the show's most epic battle scene in "Chosen," so credit is due. But, even that victory felt a little hollow given that the First's lack of a corporeal form meant it was not truly defeated, just subdued.

Played to delicious perfection by Clare Kramer, Glory is not only one of Buffy's best villains, but one of its best characters. Glory is all at once the strongest Buffy Big Bad and the one with the best sense of shade.

Glory sets herself apart from other villains because her master plan requires a some snooping on her part. The Master was all prophecy, Angel already had an in with the Scooby squad and the Mayor planned his Ascension for decades. Glory is a stranger who comes to town and spends the entirety of season five trying to learn about Buffy and her friends, often to the detriment of the group.

Season five's dominant theme is family — both biological and alternate families. Glory's a great villain because she also serves as a foil to Buffy and the lessons she learns throughout the season. Glory attacks almost every member of Buffy's family — she steals Tara's sanity, gets into fisticuffs with Willow and spends the season hunting down little sister Dawn "the Key" Summers. She's a loner with zero emotions who uses everyone around her. By the time she is defeated by Giles, Buffy's pseudo-dad, we get a much better lesson about the collective strength of the Scooby Squad than the more heavy-handed season four spell used to defeat Adam.

When a fan favorite character goes bad, all the ingredients are there for a great villain. And while Dark Willow didn't get as much screen time as other villains throughout the series, the plotline that led to Dark Willow's appearance had been bubbling for the entire season.

In the two-part beginning episode of season six, "Bargaining," Tara confronts Willow to tell her that she is using too much magic. What follows throughout season six is an exploration — sometimes successful, often unsuccessful — of addiction and the havoc it can wreak on a person and her loved ones.

The extended addiction metaphor behind Willow's entire season six arc comes to an explosive end when her attempt to go cold turkey combusts and Willow goes on a magic binge caused by the death of her girlfriend Tara at the hands of fellow Big Bad Warren.

Willow's turn as a villain doesn't exactly force the group to choose sides, but it does test group loyalties and friendships. Anya, newly separated from Xander, doesn't want to see the world end, but she empathizes with Willow's vengeance. And everyone — Giles, Buffy and Xander — want to see Willow stopped, but helped. Ultimately, Willow gets closer than almost any Big Bad to ending the world before Xander gets to step in and save the day with a story about a yellow crayon.

Willow's dark turn bookends a season that explores the transition from childhood to adulthood in a post-Joyce, no-Giles world. In a series that has never shied away from a metaphor about personal demons, Buffy made it clear that Willow is not the villain that tested the group's friendship, it was the illness she had in her addiction.

Like Glory, the Mayor is not just an iconic Buffy villain, but a stunning character on his own. A centuries-old human-looking demon looking to ascend to being a giant, unstoppable snake, the Mayor was a downright charming villain who displayed astounding amounts of humanity.

The Mayor found a right-hand woman in Faith, the second slayer called after Kendra died at the hands of Drusilla in season two. Faith never fully ingratiated into the group and, being the lost girl she was, found a father in Mayor Wilkins, who gave her emotional, financial and professional security.

Unlike some other villains, the Mayor's decades-gestating apocalyptic plan was fully baked, which made for a satisfying season arc. In his fight against Buffy and company, each side lost and gained ground, which made for a sports-like tension that kept audiences wondering who would come out on top. Though Buffy ended up with the winner's trophy, the Mayor changed the entire course of the series by leading to the destruction of the high school. In defeating the Mayor, Buffy signaled that the show — and its characters — would never be the same.

"To kill this girl, you have to love her," Angel says in the season two episode, "Innocence."

And he did love her. But he didn't kill her. Quite the opposite.

Think what you will about who is the OTP of Buffy the Vampire Slayer, the reality is that Angel was Buffy's first love and her first sexual partner. Their romance became the series' most enduring metaphor about love and what happens when a romantic partner seems to change in the course of a relationship.

Moreso than any other Big Bad, Angel embraced the D'Hoffryn doctrine of "Why go for the kill when you can go for the pain?" Her stalking of Buffy and her friends amounted to a psychological torture that made Buffy's ongoing struggle to stop him even more heart-wrenching.

The final battle between Buffy and Angel is also the series' most heart-breaking moment. Buffy's choice to plunge a sword into Angel as the demon Acathla is about to swallow the world whole was the moment Buffy realized the weight of her duties as Slayer and the pain that comes with having to put the world's needs before her own.