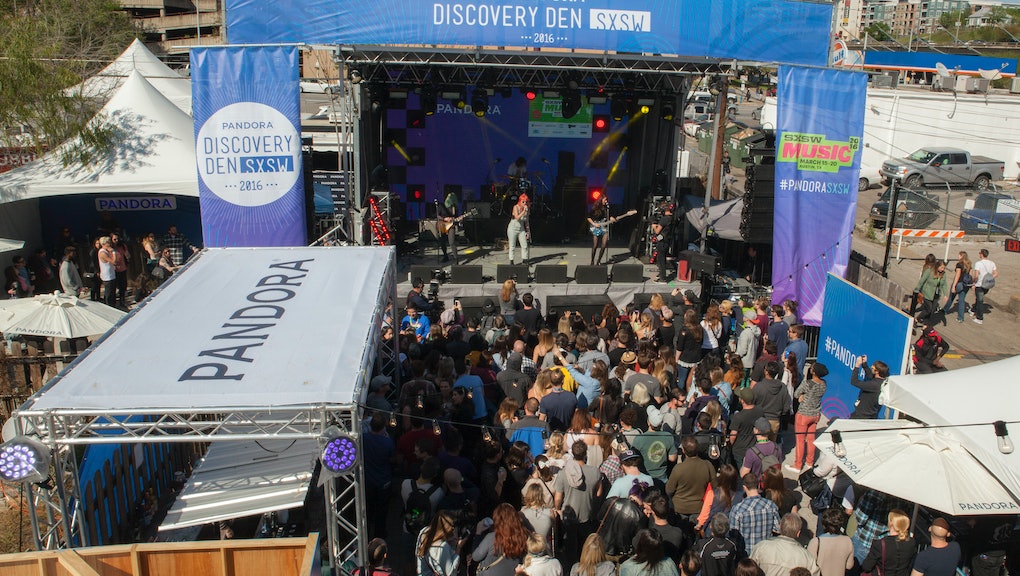 After days of blowback and artist pressure, Tuesday afternoon, South By Southwest pulled a massive 180 in its stance on the controversial "immigration clause" embedded in its contract for artists coming to perform at SXSW.

"With the announcement of President Donald Trump's latest Travel Ban, SXSW would like to reaffirm its public opposition to these executive orders and provide ongoing support to the artists traveling from foreign countries to our event," the festival wrote in a statement shared by Pitchfork.

They agreed to "remove the option of notifying immigration authorities" if a foreign artist did anything to "adversely affect the viability of [an] artist's official showcase," which applied to infractions as small as playing any of the coveted unofficial SXSW showcases which take place during the weeks of the festival. The festival also formally apologized to the artist community.

"We care deeply about the community we serve, and our event is a welcome and safe space for all people," the festival concluded.

Felix Walworth of the Brooklyn indie act Told Slant, originally flagged the suspicious contract clauses Thursday, in explaining why they wouldn't be appearing at the festival. The revelation prompted a swift backlash from a range of concerned artists.

"In light of recent attacks on immigrant communities, this practice is particularly chilling," artist and organizer Evan Greer wrote in an open letter response, signed by Killer Mike, Talib Kweli, Told Slant, the Kominas, Downtown Boys and dozens of other artists. "We are calling on SXSW to immediately drop this clause from their contract, and cease any collusion with immigration officials that puts performers in danger."

They added that "Austin, TX is a sanctuary city and these actions by SXSW show a disrespect for municipal policy."

SXSW's new response addresses many of the demands made in that open letter and subsequent statements from these artists published in Rolling Stone, which called out SXSW officials for their seeming refusal to see the issue for what it was in their "insensitive" and "utterly misleading statements" about the controversy.

"While some of the language is, as Katie from Priests put it, 'stubbornly backtracking,' the originators of the open letter feel like we have some concrete commitment for change here," Victoria Ruiz of the Downtown Boys said via text responding to SXSW's new commitment. She shared an exclusive statement responding to the victory, penned with Evan Greer, including statements from Immortal Technique, Told Slant, Priests and other artists who led the charge.

Check SXSW's full statement via Pitchfork and read an exclusive response to the festival's decision from Evan Greer, Victoria Ruiz of Downtown Boys and several of the artists that signed their original open letter below:

Today, SXSW released a blog post stating clearly that they will remove language from their contract and communications with artists that threatened international performers with deportation for playing at unofficial shows. Downtown Boys, Evan Greer, Priests and Told Slant, artists who organized an open letter and petition effort around the language, released the following statement:

After mounting pressure from artists and the public, SXSW has chosen to do the right thing and has apologized for their contract language, pledged to remove deportation language from future contracts and promised not to work with ICE at this year's festival. They also strongly condemned Trump's immigration policies and his Muslim ban. We applaud SXSW's decision to stand with immigrants and against ICE, and are thrilled that collective action from musicians has worked to push a massive institution into taking a principled stand on an issue with ramifications far beyond next week's festival in Austin.

SXSW's decision was made following our collective effort from over 80+ artists — most of whom are scheduled to perform at the festival — to pressure the festival to make the changes. We sent out a public letter, a public petition was passed around and masses of people called, tweeted and emailed SXSW demanding that they make the changes. After some negotiating, the festival finally agreed to our demands. The effort shows that artists can and must take collective action to fight unjust policies within the cultural sphere. At this critical time we need to bring the struggle to every institution, and with this victory we've shown how it can be done. We've not only sent a message to large music festivals everywhere, but also to ICE and the Trump administration. We will fight them at every turn.

There's so much more work to do, but we also want to celebrate this victory. Let's keep pushing, and using our music as a tool and a weapon to change the world.

Below are additional statements from the artists that lead the effort:

"We are pleased that SXSW made a specific commitment to protecting artists and hope that this is only the beginning of the festival taking into account their broader community, with respect to the city of Austin and how to best support and hear both musicians and fans in the future. Resistance works, and it takes many strategies and forms." — Priests

"This victory shows the power that musicians have when we stand and fight injustice together. We've allowed corporations and powerful institutions to control the ways we produce and share our art for too long. A rag tag band of queers, artists, activists and revolutionaries took one of the biggest games in the music world and won. Let this be a lesson to the powerful and an inspiration to all of us. Let this be the beginning of a new era where musicians stand together against the influence of capitalism, white supremacy and patriarchy on our music community and the world." — Evan Greer

"I'm glad to see that SXSW has made explicit promises to remove their anti-immigrant policy from the festival's contract. But our work here definitely isn't finished. I hope that as artists and activists we can continue to have conversations about what kinds of structures and institutions we're willing to support with our work and our voices. And I hope that these conversations can lead to more active resistance in the future. SXSW's concession here should serve as a reminder that we have the power to organize and make real changes to the systems that we oppose." — Told Slant

"This is a huge victory and a beautiful example of what we can achieve when cultural workers act together to make demands. These music festivals are our employers, and they reflect the same power dynamics of racism and anti-immigrant sentiment that exist in so many workplaces. No matter where you work, these fights must be fought and we hope this win shows that it can be done." — Downtown Boys

"I am grateful for all the artists and musicians I know who take a firm stance against injustice and continue to challenge and disarm the daily microagressions that create the connective tissue of bigotry. These folks help to fight for space inside these institutions, and that fight will resonate long after they are involved. I'm proud to call them my peers." — Bean Tupou from Allison Crutchfield and the Fizz

"Art does not exist in a bubble and neither do artists. Powerful vehicles like SXSW have to recognize the power of Trump's administration to harm those who are living and working full-time as artists, and those who can make art only when the time and resources are available. I am proud of the activists, artists, labels and supporters who put people first and came together to call out harmful contractual language that only reinforces this xenophobic administration's tactics. For me, this experience has been an important lesson in reading all the fine-print. As many folks have pointed out, this harmful language has been in the SXSW contract for years. It's time for artists to be more vigilant about what they will and won't accept, and to remember that even if it doesn't always feel like it WE DO HAVE POWER." — Sammus (Enongo Lumumba-Kasongo)

"I'm glad to hear SXSW has moved to change the divisive rhetoric in its artist agreement. It is a good step forward. We do not need anyone else collaborating with immigration authorities in a city where families are actively being torn apart by ICE. I hope SXSW will continue to foster positive relations with both their international and local communities and strive to bring attention to issues such as gentrification, immigration, police brutality, and anti-transgender bathroom laws. These issues greatly impact our community but are often ignored during the festivities. This issue shows that beginning a dialogue can have meaningful impact and change policies. I truly hope SXSW will throw their weight behind speaking against detrimental laws like SB4 (a Texas bill that will require all Texas law enforcement to comply with ICE) and SB6 (a Texas anti-transgender bathroom bill) that will greatly impact the people in the state they like to call home." — Milo Royal, Austin resident and musician

"While I'm pleased with this, why didn't SXSW simply listen to artists when they tried to communicate the first time? Why the excuses and the games if they knew this was wrong all the time? I really hope it comes from a place of sincerity and not just because they were about to lose artists and sponsors." —Immortal Technique

"It seems that all of the letter's demands are met, including rescinding the controversial contract language as well as issuing an apology to the artistic community. However, we must not forget that the language was initially included as a means of intimidating artists into performing only sanctioned showcases. While the festival's organizers claimed it was a signaling to border and immigration officials that they would honor visa stipulations, it mostly contributed to our current environment of fear, othering and shows of authoritarianism. We accept these changes while acknowledging that they are a corrective to aggressive and coercive behavior." — the Kominas